Enrique Peña Nieto: The Most Interesting Man in the World 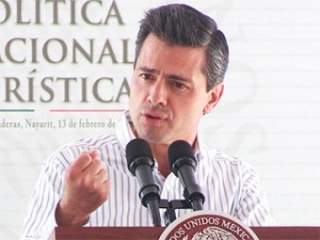 His coif is the envy of Mitt Romney. He’s so handsome his soap-star wife is known as “the seagull.” He managed to get elected president of the tenth-largest economy in the world on the slogan “because you know me.”

Is he the most interesting man in the world? Perhaps. He is Mexican president Enrique Peña Nieto, and he is certainly a man of contradictions.

“Do you agree,” Peña Nieto told an LA Times reporter recently, “that when there's tension and an obsession to want to hit the ball is when you hit it worst? You have to be loose.”

Loose is not an unfair description of the Mexican president. The most powerful man in Mexico has an entire website devoted to counting the number of days since his last public gaffe—the more memorable include saying that he “obviously” did not know the price of tortillas because he is “not a housewife,” an inability to correctly recall the dates of national holidays and repeatedly failing to pronounce Yucatan properly. Indeed, the ticker between pendejadas rarely gets beyond seven days. He has his own comprehensive entry on knowyourmeme.com, which mocks various foot-in-mouth-isms, including the time he was unable to correctly name a book that influenced his life, save the bible. An internet meme co-opting a Mexican library’s ad campaign surfaced shortly after: No le regales tu voto a Peña Nieto, mejor regalale un libro. Don’t give your vote to Peña Nieto, it’s better to give him a book.

On the subject of books, there is an entire volume on Amazon titled The Women of Enrique Peña Nieto. The president cheated on his first wife, who has since died, fathering multiple love children during their marriage. He’s moved on with Mexican telenovela actress and former model Angélica Rivera, but various rumors about his younger days plague his public image. Did we mention he has a touch of corruption? Televisa, the country's main television network granted him thousands of hours of positive coverage—some of it allegedly purchased by his party, the PRI, some of it awarded—during the 2012 election.

Yet, no one could accuse the Mexican president of being overly concerned with his checkered personal image. In fact, he seems to care less than anybody else. And in plain sight, against many naysayers’ expectations, it appears that the most interesting man in the world has managed some deeply significant reforms in his country less than a year and a half into his six-year tenure.

While many of us want to make a good impression at a new job, Peña Neito managed to pass a major resolution on only his second day in office. The Pacto por México—“Pact for Mexico”—is a political agreement signed by the three major political parties (a fourth joined in early 2013) that furthers three principal goals in Mexican society: the strengthening of the Mexican state, increasing democratization, and citizen involvement. While the nature of the pact might seem symbolic, it is actually composed of ninety-five public-policy proposals that directly further these objectives. It is a major accomplishment—particularly since Peña Nieto was narrowly elected after a rather acrimonious election—and has successfully set a tone of cooperation for his presidency. At a time when the United States could use its own cross-party alliance, it would seem such an agreement would be virtually impossible to achieve on our side of the border.

Late last year, Peña Nieto ended an almost eight-decade ban on private oil and gas drilling in Mexico. The floundering state-owned Petroleos Mexicanos (Pemex) will now be open to private and foreign investment through cash, profit-sharing and production contracts that have the potential to further enhance the Mexican economy. This will allow Mexicans to take advantage of new reserves in deep-water and shale gas that Pemex previously lacked the equipment and technology to explore, which could bring billions of dollars in profits to our southern neighbor. Duncan Wood, director of the Mexico Institute at the Woodrow Wilson Center went as far as to tell Forbes that “this will be the most significant change in Mexico’s economic policy in 100 years.” It’s all thanks to Enrique Peña Nieto's fine ability to walk the sensitive line between the Pemex workers’ union and what his country needs at a time when Pemex cannot adequately take advantage of the country’s natural resources. Energy Minister Pedro Joaquin Coldwell has said that opening the industry to foreign investors will boost output while lifting economic growth by as much as 2 percentage points each year.

Just last month, Peña Nieto enacted a sweeping reform of the education system that will centralize the process of hiring, evaluating, promoting and retaining teachers. In the past, the National Union of Educated Workers (SNTE) has lorded over the process, which often led to the buying and selling of certain teaching positions regardless of a given person’s qualifications or suitability for education. The BBC estimated that under this old system the SNTE had, “thousands of phantom teachers on its books.” Additionally, because the SNTE completely controlled the education system, no one knew how many schools, teachers, or even students existed. Under Peña’s new system an education “census” will accurately track all this information and use it to provide higher quality education, in which teachers are tested for superior expertise in their subject matter and there are a suitable number of qualified teachers for the volume of students.

While the war on drugs might seem a losing battle for any president to wade into, under Peña Nieto’s direction Mexico’s public-enemy number one, Joaquin “El Chapo” Guzman, was captured without a single shot being fired. Guzman’s Sinaloa cartel had murdered tens of thousands of people in their quest to smuggle billions of dollars worth of illegal drugs into the United States. This is actually a second major victory for Peña Nieto in the drug war, as his forces captured Miguel Angel Trevino, leader of the Zetas cartel, last July. Perhaps these arrests, significant in their own right but also symbolic, explain the 14 percent decrease in drug violence during Peña Nieto’s tenure. Mexico’s drug problem cannot be solved by one man, but Peña Nieto has made meaningful progress in the conflict. This decreasing violence will provide space for Peña Nieto to implement new security programs rather than continue the cycle of reactionary policies focuses on intermittent drug crises.

All of these accomplishments raise a question: Like the old adage about a tree falling in the forest, if an eccentric and allegedly corrupt leader accomplishes good things, does it still count?

However unsatisfying, it’s a matter of opinion. How much “color” does it take to offset a booming economy or a populace with unprecedented levels of education? People seem to have all but forgotten Bill Clinton’s dalliances with a White House intern, so will history shine brightly on EPN? It’s yet to be determined, but his political record will likely have more sticking power than his inability to keep up with the price of household goods. Do you want to invite Peña to your next dinner party? Probably not. He’d be apt to insult the guest of honor while wiping his mouth with her napkin. But it seems his reforms are the real deal. While Peña Nieto’s tendency to stay “loose” has led to a couple foul balls, he’s on more often than not—a strategy that’s putting his Mexico ahead of the game.