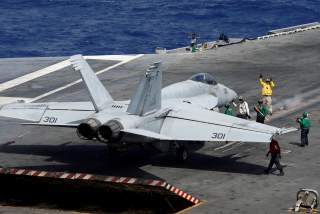 No, the U.S. needs a middle path, a way to take the friction out of the relationship without letting Beijing run amok over the free world or crossing swords and starting World War Last.

This is a demonstrably manageable competition. China doesn’t want a war either.  Its strategy is explicitly to win regional dominance and global influence by “winning without fighting.”

The U.S. has to seek an “un-peaceful” coexistence where we force China to respect Washington’s equities on a global scale. China doesn’t get to rewrite the rules of the liberal world order or decide America can’t be an Asian power anymore. The essence of this concept is encapsulated in the U.S. support for the concept of a “free and open Indo-Pacific.”

The Trump administration has already demonstrated how to do that: challenging China across the spectrum of economic, political, diplomatic, and military fronts where our vital and important interests are impinged on, and keeping the pressure on until China backs off.

Trump’s team has also been smart not to practice “linkage,” trade-offs on one issue for compromise on another. U.S.-Sino relations are just too complicated and intertwined to go down that path. Washington would wind up in a game of global Twister and fall flat on its face. Rather, whether it’s going tit-for-tat over the South China Seas, Huawei, Taiwan, or trade, the administration is wise to let each face-off happen on its own terms.

Further, China is not a problem to be solved, but a competitor to be constrained. The U.S. has to be prepared for a geopolitical sparring match that could last for a decade a more. We may need to keep it up until we outlast a generation of Chinese leadership.

Washington has to set boundaries and then enforce them like the Night Watch at the Wall. The key to controlling the competition is to avoid having dependencies that would make the U.S. subservient to China or desperate enough to seek conflict. Just as we would never think of buying tanks and planes from Russia, so there are places where we just can’t do business with China. Elsewhere, we can do business with Beijing just as we would with anyone else. This approach allows us to butt heads when needed, thereby “letting off steam” and finding a point of stability without leading to escalation.

Friends for the Fight

Friends, allies, and strategic partners have to be part of the strategy or it just won’t work. Without a more united front, there are just too many gaps and seams for the Chinese to exploit.

The administration has to recognize it can’t win this one alone. The trade war is a good example.  Trump made a strategic blunder in warring with friends and enemies alike all at the same time. It would be far better to lead the world’s free economies in a common campaign against the great excesses of Chinese economic misbehavior.

Where to begin? For starters, Washington has to do a better job of pointing out to others that siding with the U.S. is their best interest. After all, in the end, no country wants to be a suburb of Beijing.

For their part, allies and strategic partners have to give up the notion that they can be neutral in this global competition. It’s fatuous to think they can be a modern-day non-aligned movement. There is no moral equivalency between the U.S. and China. One maybe a flawed free market democratic giant, but the other is merciless, insatiable power indifferent to human rights and liberty. The free world has to pick a side.

That’s not to say our allies and strategic partners shouldn’t do business with China. We all will. But, we must limit Chinese influence—by not being critically dependent or vulnerable to Chinese manipulation or extortion. Adopting responsible policies in regards to companies like Huawei is a good example of what needs to be done.

Friendly countries not aligned with the U.S. must meet a slightly different standard. We can’t and shouldn’t ask every country in the world to pick sides. But what is sensible is to encourage them to act in their own interest and meter Chinese influence, not by trying to kick the Chinese out (too tall an order for many), but to bring the nations of the free world in to balance Chinese influence.

If there is a dark shadow over U.S. grand strategy it is that didn’t do the best job preparing all our instruments of national power for a real global competition. Several of these tools need some sharpening.

U.S. economic strategy is deeply flawed. Trump can’t tariff his way out this. Instead, the U.S. needs to focus on pressing for greater economic freedom at home and abroad. Free markets are a home game for the United States; that’s where we will be able to maximize growth and economic resilience so we are fit for a long fight.

The U.S. also has to do a better job of engaging with the world. We need a better game plan for marshaling all its soft power instruments.

Recently, the administration unveiled a global strategy for empowering women. We need a lot more of those kinds of initiatives.

Looking backward, some future historian will write that these were the days when America settled on a serious, sustainable, grand strategy—one good enough to get us to the twenty-second century. All we have to do now is keep moving toward the future with confidence and commitment.