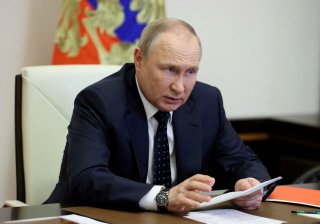 SHORTLY AFTER Hillary Clinton began likening Russia’s Vladimir Putin to Adolf Hitler during her 2016 campaign for the White House, former Robert Kennedy speechwriter and advisor Adam Walinsky told me why he believed that, if elected, she would never be able to deal with the Russian dictator.

Walinsky was there during the Cuban Missile Crisis when John F. Kennedy’s foreign policy advisors persuaded him that likening a Russian or Soviet leader to Hitler was “a step too far” and impossible to walk back. “Regardless of Stalin’s earlier partnership with the Nazis, World War II or, as the Russians call it, the Great Patriotic War, in which more than 27 million Russians died made Hitler and Nazism supreme devils in the eyes of the Russian people. Calling anyone a Nazi has been since then the absolute worst thing you can call them,” Walinsky explained. He added that “I’m sure Reagan’s people had that same conversation because neither Kennedy or Reagan ever referred to Soviet or Russian leaders, bad as they might be, as the modern equivalent of Hitler. They called them a lot of things, but not that.”

They were careful about what they said because presidents know that like or dislike their adversaries, they may one day have to sit across the table from them and come to an agreement on issues affecting the very survival of the planet. That concern hasn’t stopped the name-calling this time.

Even today, Putin invokes Nazism to justify his invasion of Ukraine, telling his people that they must bear the burden of eliminating the Nazi scourge wherever it might be found. He knows that they are far more likely to support a crusade against the heirs of the dead German than a simple desire to gobble up a harmless neighbor. Words matter and, in any war, the combatants mobilize them to create a narrative to persuade their people and the world at large of the righteousness of their cause and the need to exterminate the enemy.

On an earlier day, the United States might easily have concluded that, given Russia’s proximity to and history with Ukraine and the fact that whatever happens there has no direct impact on U.S. security interests, involving ourselves in a conflict there made little sense. That day, for better or worse, however, has long passed. It has been these “humanitarian” concerns that have led the United States to get deeper and deeper into a conflict that, at its core, is of less importance to us than to Moscow and Ukraine. In an earlier day, we might have simply walked away, telling both sides that since our national interests weren’t directly involved, they should settle their own differences. But once the invasion became a reality, in part at least because Moscow believed we would stand by and that NATO had become dysfunctional, our national interests became entwined in the struggle. The challenge since then has been to assist those attacked without being dragged further and further into a conflict that could result in a direct confrontation with Moscow. That challenge has not been well met by the United States—with a president seeming to call for “regime change” in Russia and a defense establishment taken to both cheering Russian defeat and bragging that we are responsible for it.

Perhaps Clinton’s labeling of Putin back then was premature or an exaggeration. But given what he’s brought down on Ukraine, he has done much since to merit the comparison. Our current president has continually suggested that one so evil should not be allowed to head a modern state but should instead be hauled before the International Criminal Court or some similar body to answer for his crimes against humanity. The problem with this rhetoric is that it forces one’s adversary into a corner from which there seems little chance of escaping, and in a country like the United States, it creates a public demand for something approaching “unconditional surrender.” In short, it makes it difficult for the sides to negotiate because all they can do is sit across the table and glare at each other. If Ukraine is controlled by Nazis with designs on Russia, how can Putin accept a deal that leaves them in place, and how can the West countenance a deal that leaves a psychopathic genocidal monster in control of a nation with nuclear weapons?

Wars are necessarily brutal if sometimes arguably necessary. Civilians suffer. Countries are ravaged and destroyed. It’s happened throughout history, but the demonization and consequent inability to bring the fighting to an end has been made quantitatively and qualitatively more difficult by television, the internet, and Twitter. In today’s world, one is invited or even seduced into watching and sharing the misery of both combat and the innocent victims of war in real time in a way that generates both empathy for those suffering and a visceral hatred of those responsible.

The results of all this are visible in the almost visceral trashing of anyone who asks whether going all in on behalf of Ukraine is really in the national interests of the United States. The question should be asked whenever this country considers devoting blood and treasure getting involved in the disputes of other nations. Asking it should not allow others to question one’s patriotism and those of whom it is asked have a responsibility to make their case. That would have been a difficult case to make without Vladimir Putin’s help, but he made it clear that if he succeeded in Ukraine there would be a second and third act.

Unless he has completely lost his grip on reality, Putin knows that Ukraine is not a Nazi state and poses no threat to the Russian homeland—even if like Russian leaders before him he views control of the “near abroad” as in his nation’s interests. The war has gone badly, but it is foolish to think as a threatened leader, whose real adversaries in the West are both supplying Ukraine with the weapons his army is confronting and bragging about weakening Russia via a proxy war, Putin will simply accept personal and national humiliation, fold his tent, and go home. He is far more likely either to escalate the war, attack Western supply lines, or decide a war of attrition will lead either Ukraine or her allies to conclude the game isn’t worth the candle.

A rational Russia would, however, be looking for a face-saving way out of the mess resulting from the miscalculation that led to the invasion, and both Ukrainian and Western leaders have to assume that Putin will act rationally in his and his country’s interests. The Ukrainians have already agreed to take any proposal to join NATO off the table but aren’t willing to cede land to the Russians. Even the ethnic Russians living on that land at this point consider themselves Ukrainian rather than Russian.

Those who earlier suggested there should be some way to provide an “off-ramp” so that Moscow could save some face without surrendering Ukrainian interests were pilloried for being too soft. But the United States has a real interest in trying to square the circle so that Ukraine survives. Putin can back off without either fleeing to Saudi Arabia or retiring to the Black Sea, and everyone avoids the escalation and destruction that would accompany an unending conflict.

Putin has managed to unite his Ukrainian neighbors, revitalize NATO, persuade Finland (and possibly Sweden at the time of writing) to join, and allowed the United States to reestablish some of its credibility. Now the task for all sides is to find a way out because there is little more to be gained by any of them… and much to lose.

David Keene is a member of the Board of Directors of the Center of National Interest and was chairman of the American Conservative Union for twenty-eight years.