Entangled America: Why Another International Nuclear Arms Race Has Begun 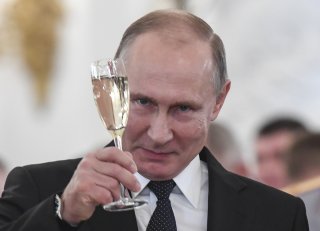 The United States signed its first arms agreement with the Soviet Union in 1972. Since then, there was always a caution that if its adversary in Moscow failed to live up to the terms of the agreement, then the United States had to preserve the capability to expand U.S. nuclear deterrent.

The Strategic Arms Limitation Talks (SALT) I of 1972 allowed a five-fold increase in Soviet and U.S. nuclear warheads—even with limits placed on overall strategic nuclear delivery vehicles known as SNDVs. This breakout treaty was less of an issue then than it is today. Despite the huge increase in allowed Soviet multi-warhead land-based missiles, U.S. officials have described the SALT deal to be consistent with the new era of “détente” and peaceful coexistence.

The 1979 SALT II Treaty continued this build-up, but modestly limited SNDVs to 2250 but still allowed the growth in strategic or long-range nuclear systems to near twelve thousand warheads. At the same time, the companion arsenals of theater or short-range and lower-yield or battlefield nuclear weapons were not placed under any limits given serious difficulties in locating and accurately counting such arsenals.

Thus, at that height of the Cold War, U.S. Defense Secretary Caspar Weinberger estimated all Soviet nuclear weapons at somewhere around thirty-five thousand—with the dissolution of the Soviet empire, the archives in Moscow and more open Russian officials exposed the fact that the real number was closer to forty-five thousand.

The START I Treaty and Start II Treaty process markedly reduced strategic nuclear warheads in agreements made in 1991 and 1993. Thus, the issue of “breakout” became more real. The Reagan administration laid out in numerous NSDD’s or National Security Defense Directives the framework for the START reduction process and the companion rationale for the modernization of the U.S. nuclear arsenal as early as 1981.

What was critical to signing these agreements with Moscow—whether the Soviet Union or the Russian Federation—was America’s ability to “hedge” against a collapse of the treaties supporting reductions.

However, after the end of the Soviet Empire, the United States went on a very extended procurement holiday during which our nuclear elements were not replaced or modernized. The ability to hedge was a problem. The Trident submarine production ended in 1992; the B2  bomber was terminated at only twenty airplanes in 1997 by Congress; and the new Peacekeeper 10 warhead land-based missile was stopped at fifty missiles, and the small mobile intercontinental ballistic missile, dubbed “Midgetman” was terminated.

After all, Russian president Boris Yeltsin and President H. W. Bush had agreed to big reductions in the START II treaty of January 1993. Yeltsin spoke at the United Nations in favor of both steep reductions in U.S. and Russian nuclear weapons and the deployment of global missile defenses in cooperation with the United States.

But the Russian Duma turned away the START II treaty, and the United States lost an opportunity to implement the treaty’s ban on multiple-warhead “heavy” land-based missiles. The Duma cleverly added a requirement to the agreement that all future U.S. missile defense work be kept in the laboratory, a ploy tried throughout the history of the Cold War first by the Soviets and then the Russians. Russian president Mikhail Gorbachev tried the ruse at various summits with President Ronald Reagan, and subsequent Russian leadership tried again and again to stop U.S. missile defenses, both those missile defense systems protecting the continental United States and its allies in Europe and Asia and the Middle East.

In fact, it was the Soviet’s General Secretary Leonid Brezhnev who called President-elect Richard Nixon in 1968 and urgently proposed that the two countries must ban missile defenses. The reason? The Soviet leader was convinced the previously announced “thin” missile defense proposed by the then Johnson administration to deal with China’s growing but still small nuclear arsenal was really aimed at blunting the Soviet’s nuclear deterrent and thus had to be eliminated.

Of course, those discussions continued, culminating in the 1972 Anti-Ballistic Missile Treaty that effectively banned missile defenses from being deployed by the United States. The treaty allowed each party to deploy one hundred interceptors to protect their capitol (Washington and Moscow) or a nuclear missile base. But for the United States, both were politically untenable. Protecting only Washington but not America’s heartland was a political non-starter. And protecting U.S. missiles but not people could easily be defeated by the Soviets simply launching an extra one hundred warheads at the U.S. base to deplete the deployed interceptors.

With the Moscow Treaty of 2002 and the New Strategic Arms Reduction Treaty (START) of 2010, the United States and Russia deployed nuclear warheads were further reduced from six thousand (the START I level) to twenty-two hundred and then to 1550. The SNDVs were reduced to no more than seven hundred. That’s a nearly 90 percent reduction from the peak levels of both nation’s nuclear warhead arsenals reached in the late 1980s.

Ironically, in 2002, the United States also jettisoned the Anti-Ballistic Missile Treaty, especially in light of rogue state missile threats such as from North Korea and Iran.

But nonetheless, Moscow continued with these two agreements with Washington to cut strategic nuclear forces by nearly 75 percent, establishing there was nothing incompatible with deploying robust missile defenses while simultaneously establishing a strong, credible, modern nuclear deterrent, albeit at very much lower levels.

In the face of much lower levels of nuclear warheads—levels not seen since the 1950s—the breakout by the Russians could markedly change the strategic balance as the Russians still have large, heavy land-based missiles capable of deploying thousands of additional warheads. In the case of overall Russian systems, although they have just above five hundred SNDVs now deployed, that number could climb to seven hundred under the New START Treaty and give the Russians an additional capability in excess of the current breakout capability of building to four thousand to five thousand strategic, long-range nuclear warheads.

Each president since the end of the Soviet empire has emphasized in four consecutive nuclear posture reviews, also known as NPRs, that the United States must have a credible and sufficient hedge capability, including a responsive infrastructure, to be able to balance any possible future treaty breakout by Moscow.

The future U.S. force of 400 intercontinental ballistic missiles, which includes 12 future Columbia-class submarines each with 16 missiles, and 60 nuclear-capable bombers, could deploy another 1,280 fast-flying missile warheads. Also, there are 800 additional intercontinental ballistic missile warheads and an estimated 40 more warheads for each of America’s 12 deployed submarines—with 16 D-5 missiles per submarine. Combined, that’s a total of 2,770 warheads. If bomber weapons are included in that figure, then the number reaches a maximum of just below 4,000.

But there are two caveats to that number. In the nuclear business, fast-flying intercontinental ballistic missiles are the “coin of the realm” and in the hands of U.S. adversaries more worrisome than relatively slower delivery vehicles such as strategic bombers.

Thus, intercontinental ballistic missiles and submarine-launched ballistic missiles would number under three thousand but would take some four years to reach that number given the logistical challenge the United States faces in building the “hedge” it has in its force.

But now the United States is facing two additional challenges. One of its own making and one from China. Both are deadly serious.

As Policy Analyst Patty Jane-Geller has noted, Adm. Charles Richard, commander of U.S. Strategic Command, has said that the military is “witnessing a strategic breakout by China.” He warned that China is capable of bringing force to bear “any level of violence, in any domain, in any geographic location, and at any time,” Jane-Gellar stated in a nuclear analysis published by the Heritage Foundation.

U.S. satellites have discovered some 350-400 new Chinese missile silos, each laid out in a grid pattern some three kilometers apart. These new intercontinental ballistic-missile “launchers” are designed to hold the DF-41 missile. The DF-41 is a ten-warhead missile. Added up, the Chinese potential sprint to nuclear superiority may indeed be materializing, a possible four-thousand warhead builds that would be 266 percent of the total deployed warheads currently in the U.S. nuclear arsenal.

The second challenge the United States faces is one of its own making. As Jane-Geller explained, “the Biden administration was reported to be considering delaying the Pentagon’s plan to modernize the United States’ Cold War-era nuclear forces. Worse, just a few days prior, House Armed Services Committee Chairman Adam Smith (D-Wash.) sent a letter asking Biden to consider reducing U.S. nuclear forces.”

The House Armed Services Committee chairman wants the administration to jettison all of the U.S. land-based missiles particularly the new ground-based strategic deterrent, also known as GBSD. Previous proposals in his committee to do just that failed 13-42, and on the floor of the House 166-266.

But despite these votes—in a Democratically controlled House—the administration yielded to pressure from Sen. Elizabeth Warren (D-Mass.) and Sen. Jeff Merkley (D-Ore.) to once again study whether the GBSD is needed and whether there can be a cheaper and strategically viable alternative of either extending the life of the fifty-year-old Minuteman-III or perhaps jettisoning intercontinental ballistic missiles altogether. (Life-extending an eventual obsolete asset such as the current Minuteman-III would accomplish that objective.)