Envisioning the New Normal After the Coronavirus Prison Crisis 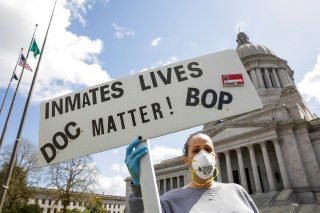 Prison bars do a good job of keeping those incarcerated from getting out, but sadly they don’t keep viruses from coming in. Indeed, as of April 22, two of the top five locations in the United States for coronavirus infections were prisons in Ohio. Even if a prison never admitted or released anyone, staff and contractors come in and out every day. Moreover, because of the crowded spaces and often poor air circulation and sanitation, lockups can be Petri dishes for spreading infections. Local jails are even more exposed, due to the rapid turnover of pretrial detainees.

Given this crisis, America stands at both a short-term and long-term crossroads in corrections. Most urgently, states and localities should undertake all measures consistent with public safety to reduce the number of cases and deaths associated with the coronavirus inside their correctional facilities. In looking to the future though, will correctional agencies simply return to past practices after the virus recedes, or does this pandemic provide an impetus for rethinking old ways?

Turning first to the immediate challenge, governments are taking three primary approaches in mitigating the coronavirus in corrections.

The first strategy, for which there is a consensus, is the focus on improving sanitary conditions behind bars. Most jurisdictions are also broadly embracing changes in practices and policies to reduce the number of arrests and admissions for unpaid fines and fees; minor offenses; technical violations of the rules of probation and parole supervision that do not constitute new crimes. This has the virtue of protecting not only correctional officers but also police officers who incur some risk each time they make an arrest. Finally, and of course most controversially, some states and localities are expediting the release of individuals, particularly the geriatric and medically vulnerable.

First, taking steps inside correctional institutions to reduce the risk of spread has proven uncontroversial, perhaps in part due to the threat posed to correctional officers, some of whom have already lost their lives to the coronavirus. The Centers for Disease Control and Prevention has issued helpful guidance for correctional facilities in this regard. Despite the commendable intentions motivating these efforts, limitations on the effectiveness of these steps include the physical design of these facilities, overcrowding in some jurisdictions like Alabama and Nebraska, lack of staff training in sanitation, and a shortage of supplies such as hand sanitizer and disinfectant. In some prisons, the manufacturing of such supplies has begun, both for use in prisons and in a free society.

Second, state and local jurisdictions have wisely sought to reduce the unnecessary flow of people into jails and prisons. Perhaps the most obvious place to start has been to stop jailing people for warrants issued due to unpaid fines and fees, including those found to be driving with a license that was suspended for failure to pay these obligations. The Fines & Fees Justice Center tracker indicates that jurisdictions from Kentucky to Philadelphia have taken these steps during the current crisis. Additionally, many police departments and sheriff’s offices from Montana to Nashville have curtailed arrests for the most minor offenses, instead opting to issue citations. Finally, Colorado and other states have reined in technical revocations to prison from community supervision. This refers to violations of rules, such as missing a meeting, drinking alcohol, or leaving the county without permission, which do not constitute a new offense.

Finally, some prison systems and a larger share of local jails have expedited the release of certain categories of individuals. Corrections leaders have rightly insisted that, rather than blanket releases, these measures be based on individualized consideration, accounting first and foremost for risk to public safety. Many state prison systems have sensibly prioritized those who are geriatric and medically fragile, given that they are at the greatest risk from the virus. For example, an April 19 order by Maryland Gov. Larry Hogan expedited the release of seven hundred individuals who are at least sixty, serving time for nonviolent offenses and have a good record while incarcerated. Conservative Oklahoma Gov. Kevin Stitt has focused on those of all ages convicted of the least serious crimes, commuting the sentences of 450 people, nearly all with drug possession or property offenses. Other systems are also targeting individuals with just a few months or less left on their sentences, particularly when any remaining rehabilitation programs could be completed upon release even while social distancing.

The long-term question is whether these changes will prove fleeting or are the harbinger of a broader rethinking of corrections. The United States has long been an outlier among developed countries, accounting for 5 percent of the world’s population, but 25 percent of the world’s prisoners. Additionally, the conditions of incarceration in the United States have long been contrasted with those in Western Europe. These two realities are not unrelated since a country like Germany with one-tenth of the incarceration rate of the United States can afford to maintain less crowded and more humane conditions in its prisons. By definition, correctional institutions are out of sight, out of mind for most Americans but can there be any doubt that there is now a far broader consensus for improving prison conditions now than at the beginning of the year? If nothing else, our self-interest cannot be divorced from the presence of correctional staff living in our communities and the fact that more than 95 percent of prisoners will eventually be released.

Another reality that will affect the long-term trajectory is the budgetary pressures confronting state and local governments. Some 90 percent of all prisoners are in state and local lockups, rather than federal prisons. While no policymaker should sacrifice public safety simply to save money, state and local governments must balance their budgets each year and the need to economize is likely to prompt lawmakers to identify ways to safely reduce incarceration costs.

Fortunately, there are plenty of opportunities. Over the last decade, the Pew Center on the States has identified thirty-five states that have adopted such policies under the rubric of justice reinvestment. An important cautionary note, though, is that policymakers must cut with a scalpel, not an ax, so that the very programs that safely keep people out of prison, such as drug courts and mental health treatment programs that serve correctional clients, are not diminished in their capacities.

Perhaps the most positive sign that points towards a new normal in corrections is the development and adoption of new technologies. Necessity is the mother of invention and many probation and parole agencies have used this moment to shift away from requiring low-risk individuals they supervise to make office visits. Instead, they are utilizing phone and computer video applications for checking in. Given the transportation hurdles faced by many people on supervision and the prospect of people of many different risk levels all gathering in a waiting room, having everyone on probation and parole come for office visits every week was never a good idea. In fact, for these reasons, back in 2013 Georgia moved its parole system to a mobile office model utilizing home visits instead of office appointments. Similarly, during the current crisis, many courts are discovering that certain routine hearings can be conducted just as effectively by video as in person.

However, the new normal of a smaller but more effective corrections system will only prove sustainable if the trend of falling crime rates that have persisted since the mid-1990s continues. This may depend in part on fortifying reentry interventions that break the cycle. While crime increased in some prior recessions, it continued to decline during the 2008 and 2009 financial crisis. During that time, though, incarceration rates were relatively stable, dropping by less than 1 percent. The declines since the coronavirus crisis began, particularly in local jail populations, appear far more significant. Just from March to April, Iowa has released 1,293 people out of a prison population that totaled about 8,500 and the population in Texas county jails fell by more than 10,000.

This raises the stakes for efforts to promote successful reentry. Yet the demands on the resources needed by those coming out of jails and prisons, such as employment, housing, and even food, are markedly greater than during the last downturn. There are also entirely new challenges for the formerly incarcerated that did not exist then, such as whether public transit is operating or can be safely accessed and, for those with children, whether schools are open. Unfortunately, a Council of State Governments survey of reentry services providers found that one in five have already laid off staff and nearly half are worried about keeping their doors open.

Still, there are many reasons for optimism even on reentry. In the last decade, countless companies have embraced hiring people with criminal records, with household names from Google to Coca-Cola and Starbucks signing a 2016 White House pledge. This is one priority that has spanned administration, as President Donald Trump gave a powerful 2019 speech on second-chance hiring. Additionally, many reentry initiatives backed by major foundations and companies have emerged in recent years, including our own Safe Streets & Second Chances initiative in conjunction with Koch Industries and Florida State University and The Last Mile program funded by Google and other technology companies that teaches coding in prison. Additionally, more states must follow those such as Texas and West Virginia that have enacted reforms in the last few years to allow people with unrelated convictions to enter licensed occupations.