In an Era of Divided Government, China Can Unite 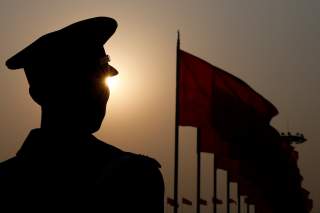 The televised bickering between President Trump and top Democratic leaders illustrates that, if political leaders find any consensus in 2019, it won’t be on the border wall. Nor is it likely that Trump, the Democratic House and Republican Senate will find accord on Russia policy, the approach to Saudi Arabia, North Korea diplomacy or, for that matter, almost any other foreign-policy issue. Surprisingly, on the biggest issue of all—how to deal with China—there is actually far more agreement than discord. Pursued smartly, competition with Beijing could actually bring our political leaders together rather than drive them apart.

From the outset, the Trump administration has taken a tough line on China. Candidate Donald Trump railed against trade deficits and the thousands of manufacturing jobs he charged Beijing with “stealing” from the American economy. As president, his national-security strategy placed top priority on preparing the United States to compete with a resurgent China and Russia. And in a recent gauntlet-throwing speech, Vice President Mike Pence decried Beijing’s trade practices, human-rights abuses, activities in the South China Sea, and efforts to meddle in American democracy. “Previous administrations all but ignored China’s actions,” Pence declared. “Those days are over.” Pence promised the administration would respond with tariffs, higher military spending, freedom of navigation exercises, improvements in the nuclear arsenal, and efforts to expose covert Chinese political influence.

Not since the normalization of ties in the 1970s has an American administration been so public and explicit about its concerns about China, or so adamant about its appetite for a reckoning.

Strikingly, the domestic pushback against this hard line has been virtually nonexistent, while Trump’s every other foreign-policy move engenders resistance. Withdraw from the Iran nuclear deal or pursue diplomacy with North Korea, hold a summit with Vladimir Putin or hug the regime in Riyadh—all this and more emboldens critics among Democrats, Republicans, or both. China today is the great outlier. While many in Congress may disagree with Trump’s particular priorities in relations with Beijing, few have opposed the tough approach.

Nancy Pelosi, who is likely to return as Speaker of the House, recently laid out her own bill of goods. “Every day I have worked on the subject of China one way or another,” she said, “whether it’s violations of China and human rights, Tibet, Hong Kong, the rest; whether it’s their proliferation of mass destruction. . . also on the intellectual property issue.” Pelosi recalled that, years ago, champions of normalized trade relations with China were “saying ‘Oh, no, it’s peaceful evolution, it’s going to work itself out. Let it go.’ That was, say, twenty-eight years ago . . . the trade deficit was $5 billion a year. Now it is more than $5 billion a week. A week. And yes, we have to address that.”

Sen. Chuck Schumer, the other participant in this week’s Oval Office squabble, struck a similar line. In June, when Trump slapped China with $50 billion in tariffs, the minority leader praised him. “It’s going to take a little bit of toughness at the beginning,” Schumer said. “China will bark back. But they need us more than we need them—President Trump is right about that—and we should be strong. . . what he did on China is right.” Still other Democrats have echoed the administration’s line on China. Previous American approaches were “misguided,” Sen. Elizabeth Warren said this year in Beijing. “We told ourselves a happy face story that never fit with the facts. Now U.S. policymakers are starting to look more aggressively.”

Some of the president’s critics charge Trump with pulling punches, as when Sen. Mark Warner slammed a deal that allows Chinese smartphone maker ZTE to remain in business. Others, like Sen. Bob Corker, differ with Trump on methods—pointing out, for instance, that tariffs amount to a tax on Americans. But while even China hawks are careful to note areas in which the United States and China might cooperate, virtually no one in national political life is calling for a softer overall approach to Beijing.

This convergence in views could provide the basis for bipartisan cooperation in our coming era of divided government. It would be a mistake to limit such collaboration only to a reactionary, coercive China agenda—further controlling exports, penalizing technology theft, conducting military exercises, opposing Beijing’s diplomatic efforts. These and other steps are necessary, but the shared China fixation also provides an opportunity—possibly the only major one in these gridlocked political times—to rally elected leaders around a program of American strength and renewal.

Analogies to Soviet-era containment are inapt for a variety of reasons, but in one respect Cold War history illustrates the possibilities that extended U.S.-China competition portend. The imperative to outrun Moscow helped spur America to a program of national greatness and international leadership. Republicans and Democrats alike wished to demonstrate that democracy and capitalism’s superiority over communism and central planning, to enlist more friends and allies than the Soviet bloc, and to inspire the world by showing what a free people can accomplish.

To be sure, the Cold War also brought proxy wars, covert operations, superpower crises and national anxiety. But under its influence, the United States sharpened its edge by improving civil rights at home, establishing a worldwide alliance system, and aiding economic development in impoverished regions. It even built the interstate highway system, expanded research universities, and landed men on the moon.

No one should wish a return to the Cold War, or even a watered-down variant of it. But if America is faced with an indefinite period of competition with China—and most observers believe we are—its leaders should use it to catalyze a far grander, positive agenda of American greatness in the twenty-first century.

Indeed, the competition has already spurred small steps. Earlier this year, Congress passed the BUILD Act, which establishes a new, $60 billion development aid facility that contrasts with China’s own belt-and-road efforts in third countries. This month, the Senate unanimously passed the Asia Reassurance Initiative Act, which aims to bolster America’s presence in the Indo-Pacific region and enhance our military and economic ties with friendly countries.

A more ambitious agenda is easily conceivable. China competition could spur the United States to invest more in science and engineering education, for instance, and to revamp visa policy so that Chinese graduates educated here stay rather than export their newfound expertise. Congress and the administration could work to deepen security and other ties with new, non-allied friends like India, Indonesia, Vietnam and others. Political leaders could more vocally champion the cause of democracy and human-rights abroad, drawing a not-so-subtle distinction with Beijing’s authoritarian model. The administration could expand trade with countries wishing to unite in favor of open economies rather than state capitalism. Washington might even consider dealing, at long last, with the titanic, looming debt crisis—after all, it’s China that owns a decent share of it.

None of this will take place naturally or without leadership, and it would require courage and compromise—none of which, as the Oval Office tussle shows, are in abundance these days. But no country thrives on competition like America. At a time of bitter political strife, many issues stand out that will push our political leaders apart. Amid a growing consensus about the magnitude of the stakes, smart competition with China could actually bring them together.

Richard Fontaine is the president of the Center for a New American Security.