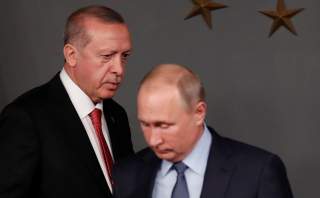 Even as the conflict in Syria enters its final stages and is becoming a political issue rather than a military one, several outstanding issues remain unresolved that prevent the war from moving beyond its military phase. As of today, there are two military issues: the Idlib province is controlled by Hayat Tahrir al-Sham (HTS) and the area east of the Euphrates River is held by Kurdish-dominated Syrian Democratic Forces (SDF). Unfortunately, parties with vested interests in rebuilding Syria haven’t been able to form and launch a Syrian Constitutional Committee, which would catalyze the political process in Syria. Without finding a proper compromise between all parties involved on these important issues, it is going to be almost impossible to move forward with conflict settlement.

The two aforementioned areas in Syria border Turkey, which makes it extremely important for Ankara to find a solution that takes into account its security concerns and interests. As long as Russia is heavily involved in the conflict settlement process, the Moscow-Ankara track in the Syrian will remain at the forefront.

At the end of April, Damascus and Moscow launched a limited offensive in north Hama and south Idlib after increased attacks on Russia’s military infrastructure in the area. This has been a red line for Moscow for a long time. Now, it appears that this limited offensive might be a bid to pressure the rebels and Turkish cosponsors into reaching a compromise. At the same time, there is the possibility that the offensive could create tensions between Moscow and Ankara, which also might prompt Turkey to strike a deal with the United States at Russia’s expense.

With these factors in mind, one of the most essential conditions for the Syrian peace process is that it must address the problems in the Idlib province and east of the Euphrates River. Despite the numerous conversations that Russian president Vladimir Putin and Turkish president Recep Erdogan have had over the past several months, the situation in Idlib and in Kurdish-held areas remain in dead-lock. There are several reasons for why the situation around these two regions is so difficult to resolve.

The Russian-Turkish agreement on establishing a buffer zone in September 2018 has proven to be dysfunctional. According to the agreement, Ankara was tasked with ensuring that extremist groups were separated from the moderate opposition groups. It was Turkey’s responsibility to prevent those groups from conducting attacks on Syrian soil, including attacks on Russian military objects. In the months since the agreement was signed, Idlib has been taken over by the militants of Hayat Tahrir ash-Sham (HTS), an extremist group that has terminated its relationship with Al Qaeda and now controls about 90 percent of the province and has subjugated moderate opposition groups. Moreover, attacks from HTS-controlled territory in Idlib towards Syria are becoming more frequent. So far, Moscow and Ankara have remained committed to the September 2018 agreement, but it is unclear how long they can stay committed. In any case, the ongoing offensive in Hama and Idlib prevent the two actors from reaching a meaningful long-term deal.

This concern was confirmed by Putin at a press conference that was held after April 8 talks with Erdogan. “Indeed, we have been unable to reach the parameters that we agreed upon in Sochi so far, but I believe that this problem can be resolved,” he said. Up till now there is no visible progress on that matter.

The situation in Idlib was further complicated by the risk of a new refugee exodus, which would have occurred should the scope of the offensive widen. According to UN estimates, by the end of April, the current offensive has forced 250,000 civilians to flee the area. As of today, the province hosts more than three million civilians and about fifty thousand HTS militants. Such a development is cause for concern for Turkey since these refugees will likely travel north. Turkey is already host to 3.58 million Syrian refugees, and is unwilling to take in any more of them. An escalation in violence however would go against both countries' interest, since Turkey and Russia currently prioritize the return of the refugees. Moscow is not quite happy with the military approach it currently employs towards Idlib. This dilemma is being discussed between Russian and Turkish military constantly in a bid to find a solution which will avoid another massive refugee flow.

However, Moscow is losing patience. On the eve of another round of peace talks in the Kazakh capital of Astana at the end of April, Russia’s deputy envoy to the UN, Vladimir Safronkov, said: “We cannot say for how long this status quo in Idlib can last. It is not viable at all, on the contrary: it is dangerous for Syria and the region.” Additionally, Russia's Syria envoy Alexander Lavrentiev noted after the first day of the Astana talks that surgical air strikes on extremist group property in Idlib would continue. And indeed, they continued for about three weeks.

The result of this series of decisions have been the creation of a situation in which neither side to able to maneuver. Russia and Syria want the Idlib province to fall under the Syrian government’s control while sidestepping a potentially large military operation. The two countries need to regain control over the M4 and M5 highways, which connect Aleppo with Latakia and Damascus. These highways are essential to restoring economic and trade activities in the country. At the same time, Moscow needs to pressure Damascus to restrain it from launching the large-scale military offensive. Also, Moscow needs to respond to Idlib-based attacks on its property in Syria. Ankara seeks to avoid a military operation in the area, but it lacks the capacity to simultaneously resolve the issue of HTS’ presence in Idlib. For Moscow and Damascus, this may be the best way to push Ankara and area rebels toward making concessions.

From another angle, the situation in Idlib is tightly connected to the problem of the SDF's control of territory in the northeastern part of the country. Ankara’s reluctance to take practical steps toward resolving the situation in Idlib is contributing to these problems. According to senior Russian diplomats, an option for some sort of exchange deal between Moscow and Ankara on Idlib and Manbij may still be on the table.

The Trump administration’s 2018 decision to withdraw its forces from Syria appeared to add more uncertainty and complexity to the conflict. In addition, it created a more difficult operational environment for Russia, Turkey, Iran and the Syrian government.

The Trump administration partially reversed this decision by announcing its intention to leave around a thousand soldiers in Syria, with the objective of acting as a buffer between the Turks and Kurds, while also keeping Iran and Syrian forces in check. That decision naturally irritated Turkey since it considers Kurdish forces such as the SDF as terrorist groups and threats to its national security.

At the same time, U.S. indecisiveness in Syria pushes Ankara closer to Moscow. Erdogan tries to use Russia as a counter-balance to U.S. policies that do not align with Turkish interests. It appears that Turkey wants to strike a deal on Kurds with Russia, which could make the United States change its mind. However, it is unclear whether the current U.S. administration will be consistent in its moves in Syria and how it will deal with its NATO ally Turkey.

Turkey now finds itself in quite tricky situation. On the one hand, it doesn’t want to go for a large-scale military operation against the Kurds for very good reasons. On the other hand, Ankara is looking for a limited face-saving operation in east of Euphrates areas which will be supported by Moscow. However, there are several obstacles for that.

First, any new offensive against the Syrian Kurds will be more difficult to conduct than the two previous operations (Olive Branch and Euphrates Shield) because the military arm of the Kurdish Democratic Union Party is among the most military capable and trained groups in Syria. Also, the operation will require more resources, logistics and support (and that is against the backdrop of major economic issues in Turkey).

Second, the high risk of substantial Turkish military casualties will cause more public resentment for the Erdogan government, which it can ill afford as the recent municipal elections have shown.

Third, the operation against the Kurds will almost certainly escalate tensions with the United States with which Ankara currently is not in the best relations. And, finally, a large-scale military operation east of Euphrates will produce another flow of refugees which contradicts Turkish interests.

As of now, it seems that neither Russia nor Turkey has a tangible plan for how to manage the crisis in Idlib. Therefore, the ongoing uncertainty in the area and the influence of the United States plays in SDF-held areas further complicates Turkey-Russia moves in Syria. Although the militaries of the two countries are currently working on Idlib issue and discuss Turkish military operation east of Euphrates, no one is ready to take decisive action unilaterally to break the existing status quo. The major questions now are: for how long Russia will be patient on Idlib; how far Turkey can go against U.S. interests in Syria; and what is Washington’s policy plan for Syria.