Erdogan Must Avoid the Iran Trap 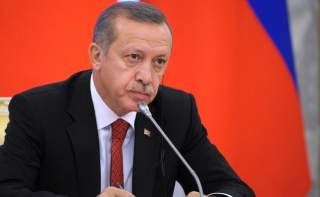 “The world is bigger than five.” This phrase, referring to the permanent members of the UN Security Council, is among Turkish president Recep Tayyip Erdogan's favorite platitudes. But when he uttered them again at the General Assembly this September, his diatribe struck a different chord.

Turkey stands at a critical juncture: since this summer’s coup attempt, the president has consolidated unprecedented power—in no small part due to his rants against the West. With xenophobia and nationalism running rampant in Ankara, Erdogan is better positioned than ever to challenge the Western-led liberal world order. But before taking another step, the president would do well to heed the cautionary tale of his Persian neighbor.

For most of the twentieth century, Turkey and Iran experienced comparable trajectories under modernizing and Western-allied statesmen. Those paths diverged in 1979 with a single key decision: to embrace or defy the West. Turkey has prospered because it has chosen to work within the international system. Since its Islamic revolution, Iran has worked against it. The results for the Middle East’s largest non-Arab powers could not have been more disparate: today, one benefits from NATO’s security umbrella, the other is an international pariah.

The July 15 putsch has upset that dynamic. Erdogan, resentful of his Western counterparts for failing to promptly condemn the coup attempt, is cozying up to his fellow strongmen in Tehran and Moscow. To be sure, Turkey has practical reasons for such outreach—primarily over Syria—but it could also reveal a broader strategic shift. At home, a traumatized electorate has bolstered Erdogan’s “sultanism,” unleashing his latent contempt for the West. As one Turkey expert warned in the coup’s aftermath, Turkey is at its “1979 moment.”

An iconic slogan of Iran’s 1979 revolution was “Na sharghi, na gharbi—jomhuri Islami” or “neither East nor West, [but an] Islamic Republic.” Since then, Tehran has adamantly rejected the world’s prevailing ideologies, offering its own model. This ideological persistence came at the cost of a shrinking circle of allies abroad as well as economic and conventional military stagnation at home.

The first, which should be obvious, is that countries seeking to overturn the liberal world order are unlikely to reap its dividends. Iran has some of the world’s largest proven oil and gas reserves, but its revolutionary ideology has hampered its financial potential, leading to decades of brain drain and economic isolation. Crucially, in the words of one Iran watcher, Tehran “missed the real revolution”—that of emerging markets. Before last summer’s nuclear deal, Iranian officials blamed their country’s faltering economy on Western sanctions. Post-deal, however, Iran remains a minefield for Western business and investors, and those same officials are now blaming the West for failing to deliver sanctions relief. Ultimately, the real culprit has always been at home: an outdated banking sector and the domination of entities linked to the Islamic Revolutionary Guard Corps.

Turkey, meanwhile, has been able to continuously attract foreign direct investment—despite military coups, financial crises and corruption scandals galore. Unlike Iran, not only did Western-oriented Turkey catch the emerging markets revolution, it rode its way to the top. Despite having scarce energy resources of its own, Turkey’s GDP far outranks that of resource-abundant Iran—almost twofold (2015).

The second lesson is that rogue states do not enjoy the benefits of collective security. Prior to the 1979 revolution, the United States permitted the Shah’s Iran to become “guardian of the Gulf.” As a pillar of U.S. Cold War strategy, Iran developed the Middle East’s biggest army and became the largest purchaser of American arms. Under the ayatollahs, however, the Islamic Republic has faced a U.S. arms embargo since 1984 when it was labeled a state sponsor of terror.

But the sharpest lesson for Ankara lies in Tehran’s isolation during the 1980–88 Iran-Iraq War. During the war’s first two years, Iran struggled to hold the line against Iraqi offensives on its own. With the regime holding U.S. diplomats hostage for 444 days, Washington had little reason to take its side. Tehran further flouted international norms when it established the Lebanese terrorist group Hezbollah in 1982, which a year later carried out the largest terrorist attack on Americans—killing 241 U.S. servicemen at the Marine barracks in Beirut. In turn, the United States increasingly aided Saddam Hussein, overlooking his use of chemical weapons during the war. To add insult to injury, in 1991 Iran watched an international military coalition come to Kuwait’s defense and eject Iraq.

As a NATO ally, Turkey is far from facing the isolation that Iran felt in the 1980s. But it has already gotten a glimpse of it in the Syrian theater. For the last two years, the United States has supported Syrian Kurdish rebels affiliated with the Kurdistan Workers’ Party, a terrorist organization leading an insurgency in Turkey. Ankara is incensed, blaming the United States for supporting terror and undermining Turkish sovereignty.

America’s assistance to the Kurds is in part a symptom of waning Western confidence in Erdogan’s Turkey. Ankara’s recent authoritarian turn hasn’t won it any friends in the West, nor has its covert support for jihadist groups in Syria—some of which have ties to Al Qaeda. Alarmed by deteriorating democratic institutions and foreign adventurism of a crucial NATO state, the United States and EU are growing weary of the very Islamist they championed a decade ago as a Muslim democrat. Increasingly characterized by anti-Western invective, Turkey risks conjuring comparisons in Western capitals to revolutionary Iran.

Ankara can still change course, but it appears unlikely that Erdogan will have a sudden change of heart. Once labeled a rising pro-Western Muslim democracy, Turkey now has little international legitimacy left. Before risking its standing any further, Ankara should look long and hard at the costs paid by the defiant rulers of Tehran.

Merve Tahiroglu is a Turkey analyst at the Foundation for Defense of Democracies, where Behnam Ben Taleblu is a senior Iran analyst.