Erdogan's End Game Is Rife With Nepotism and Power Grabs 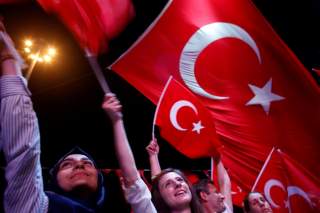 Historians get paid to predict the past and perhaps get that right only half the time. But some prognostication is warranted since Erdoğan shows no sign of loosening his grip on power or acquiescing to a Turkey which so many Western apologists still hope will re-assert itself. Fifteen years ago, diplomats and analysts denied Erdoğan sought anything more than to imbue democracy with some Islamic trappings. Perhaps fifteen years from now, the same analysts will question how they could have been blind to Erdoğan’s ultimate agenda. It is fine to quibble over the five end goals voiced above, but now is the time to discuss openly how Erdoğan visualizes Turkey fifteen years from now.

A former Pentagon official, Dr. Rubin has lived in post-revolution Iran, Yemen, and both pre- and postwar Iraq, and he spent time with the Taliban before 9/11. He is the author, coauthor, and coeditor of several books exploring Iranian history, American diplomacy, Kurdish studies, and Shi’ite politics, including “Kurdistan Rising” (AEI Press, 2016), “Dancing with the Devil: The Perils of Engaging Rogue Regimes” (Encounter Books, 2014); and “Eternal Iran: Continuity and Chaos” (Palgrave, 2005).

Dr. Michael Rubin has a Ph.D. and an M.A. in history from Yale University, where he also obtained a B.S. in biology.