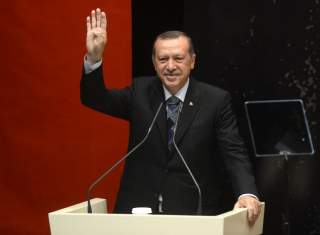 With Turkey’s elections now over, chaos in the Middle East continues and international observers are left trying to discern the contours of Turkey’s foreign policy moving forward. Despite the number of political obituaries that have been prematurely written about President Erdogan as a result of the shellacking his AKP took, foreign policy remains the one area over which he can continue to exert leadership. Regardless of what shape the new Turkish government takes, focusing on repairing Turkey’s relations both in its neighborhood and the near abroad would bolster President Erdogan and the power of the new AKP, as the party pushes for an early election, whether it happens within the year or not.

Having fundamentally reshaped Turkish foreign policy from being merely an instrument of the West into a regional power in its own right, Erdogan can still tap into Turkey’s central role in the world despite many self-inflicted wounds. While the Kurdish issue will now take on a life of its own, given the stronger than expected showing by the HDP, there are at least three critical areas of Turkish foreign policy worth focusing on for President Erdogan, beginning with his most recent trip abroad to Azerbaijan for the European Games:

Unlike the polarizing nature of sectarian politics in the Middle East, where Ankara has fallen out with Cairo and Damascus, there has been a long-standing consensus among Turkey’s center-right governments—since at least President Demirol—that from the “Adriatic to the Great Wall” lies a Turkic world full of opportunity.

China’s New Silk Road initiative pairing major investment and infrastructure projects could benefit a Turkey that is increasingly looking for its own “pivot to Asia,” given Europe’s economic problems. Along this New Silk Road, Turkey could forge strong partnerships with other Turkic nations such as Azerbaijan and Kazakhstan at a time when Ankara feels rebuffed by Europe and surrounded by increasingly chaotic neighbors. Given the Turkish-Russian rapprochement led by the strong personal chemistry between Presidents Erdogan and Putin, Ankara has further range and scope to champion its common Turkic heritage to capitalize on the tremendous potential geostrategic value of its Central Asian allies, particularly in terms of its vision to become an energy hub between East and West.

Despite the harsh rhetoric in the election campaign against governments in Cyprus, Egypt, and Israel, there is an alignment of interests between these countries when it comes to the need for pragmatic partnerships on economic, energy, and environmental issues, where Brussels and Washington would be all too eager to support Ankara. Beginning in Nicosia where prospects for a settlement have never been higher, Erdogan would do well to allow his foreign ministry to take center stage for a change.

In relations with Cairo and Jerusalem, it is unlikely that Erdogan will do an about face on the personal vitriol that exists between him and Sisi and Netanyahu. However, larger pragmatic interests in business and strategy must be allowed to prevail. The fact that Turkish-Israeli trade has continued to grow despite all of the political tensions shows what is possible. Additionally, recent energy discoveries in the Mediterranean Sea will require strong cooperation among these three actors. By not overtly provoking Cairo and Jerusalem and by helping to moderate rather than empower Hamas, Ankara can build on these areas of mutual agreement to establish a shared vision for a post-Assad Syria that will require greater cooperation as well.

Standing above the sectarian fray continually championed by Iran, Saudi Arabia, and Qatar, Erdogan—in response to these election results—has a chance to demonstrate his regional importance and to reset Turkey’s relations with Europe. The formula for Erdogan’s political success has always been Turkey’s growing economy. With the Turkish economy now on edge there has never been a more opportune moment to double-down on Turkey’s unique relationship with the European Union as an aspirant member and its most significant trading partner. America remains Turkey’s most critical strategic partner, but precisely because Washington does not involve itself in domestic politics in the way that Brussels has, Erdogan needs to personally demonstrate his renewed commitment to Turkey’s European vocation. Despite having created a ministry focused on EU relations and championed EU membership on behalf of Turkish business, relations between Ankara and Brussels have been on life support as no new chapters have been opened in recent years. By focusing on a fresh push for an expanded Customs Union, resolution in Cyprus, and transparency in the Transatlantic Trade and Investment Partnership, Erdogan has the ability to recalibrate relations.

The election results may very well mark the beginning of the end for Erdogan’s dream of a more powerful Turkish presidency, but it doesn’t mean that his legacy is over. By respecting the “national will” he proclaimed after the election he is leading by helping to reposition Turkey’s foreign policy as an inclusive model of political compromise despite personal differences. This position will go a long way towards proving many of his critics wrong.

Turkish voters breathed new life into a democracy that has been struggling with freedom of the press, urban protest movements over Gezi Park, Kurdish unity over Kobani and Syria. Yet betting against Erdogan has never been a winning proposition in Turkey and he still enjoys numerous global opportunities, not least of which is his hosting of the G20 this November. No matter what, the results of this election will fundamentally reshape the president’s party, the presidency and legacy of Erdogan, and the future of the Turkish state. How President Erdogan responds either as a chastened and more modest statesman or as an angry polemist will determine the type of legacy that he will leave. Hopefully, starting with his foreign travels and foreign policy, a new era is about to dawn in Turkey.

Dr. Joshua W. Walker is a Transatlantic Fellow for the German Marshall Fund of the United States and  longtime watcher of Turkey including as a Fulbright Scholar in Ankara who has also served at the U.S. Embassy Ankara, Turkey Desk Officer, and Senior Advisor to the U.S. Department of State. The views expressed are his own.