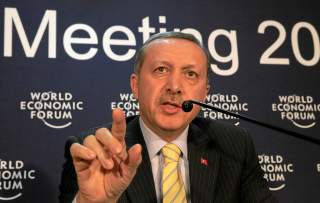 Following multiple acts of militancy, including the devastating attack at Istanbul’s Reina nightclub on New Year’s Eve, the Turkish government undoubtedly has major security issues to address. Yet, in the face of this violence, the authorities have been downplaying one of the sectors most heavily affected: the economy.

Turkey continues to invest in big projects, such as the construction of Istanbul’s third airport, while neglecting rising national debt. President Recep Tayyip Erdogan continues to label himself the “enemy” of interest rates, even as the country faces serious investment issues. Consistent militant attacks, meanwhile, have significantly lowered consumer confidence. It is no wonder why the Turkish lira continues to drastically fall.

Against the U.S. dollar, the Turkish lira has depreciated 10 percent since the start of 2017, and this trajectory shows no indication of changing anytime soon. Instead, Turkey continues to endure one of its most troubling periods in years. And with investor confidence at an all time low, the lira may face more significant dips in the days to come.

The instability of Turkey’s security environment is a major factor. While it is true that Turkish authorities have gotten somewhat of a grasp on Kurdish violence in the southeast, four different acts of militancy in Istanbul in January alone, plus the assassination of the Russian ambassador in Ankara at the end of 2016, have illustrated the serious security challenges Turkey still faces. Undoubtedly, the economy has felt the impact.

The government’s handling of this economic turmoil, however, is what truly has led to the lira’s descent. At the end of 2016, Ankara received troubling data regarding the risk of rising inflation. But even as this problem persists, the government has done little to get these numbers in check.

Turkey’s central bank could make a difference. It has the power to increase interest rates. Such a move would likely motivate international investors to deposit their money into Turkish banks, and thus, increase the value of the ailing currency. However, constant pressure on the central bank from President Erdogan has practically paralyzed the institution, particularly as the president argues that a hike in rates would discourage consumer spending within Turkey.

The Turkish government must get out of its own way. While authorities can do all they want to restore confidence in the state’s security apparatus, serious solutions to the falling lira will not be realized until the government allows meaningful economic reform. The central bank has the tools at its disposal to at least ease the concerns of international investors. Additionally, the longer the bank waits to take necessary steps, the harder it will be to solve these issues with the lira, as a much higher interest-rate hike would be needed to assist the currency in the future.

Ankara has shown little indication that it is willing to embrace such economic reforms. Instead, Erdogan has focused on increasing the powers of his own office by pushing forward a constitutional referendum to change the country’s parliamentary system into a presidential one. The potential passing of this referendum not only raises concerns for international investors worried about Turkey’s political stability, but also for the central bank, which could face even more backlash for acting against Erdogan’s wishes.

Tourists have also been taking notice of Turkey’s instability. The number of foreigners visiting Istanbul dropped to about nine million in 2016, marking a 26 percent decline from the previous year. Tourism is among Turkey’s most crucial industries. The Turkish economy, once viewed as one of the largest in the developing world, is now faltering—and the future looks bleak.

Businesses have not given up all hope, though. Immense natural resources and vast terrain still allows Turkey to attract a wide array of investors. Potential still exists for Ankara to turn the situation around. But it will be difficult. The central bank must be willing to act quickly, regardless of political pressure. Politicians must stand up to President Erdogan and ensure that his venture to increase his own power does not ultimately damage the economy. There are opposing factions, like the Republican People’s Party (CHP), who can attempt to balance out the president’s policies.

In the end, though, if the goal of militant groups operating in Turkey is to destabilize the economy, they are succeeding. And if economic reform does not occur, the country may be but a few attacks away from a serious recession.

Garrett Krivicich is an intelligence manager at MAX Security Solutions, a geopolitical and security risk consulting firm based in the Middle East.