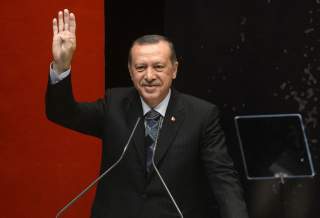 Even as its neighbors suffer under the carnage of terrorism, Turkey managed to steer the spotlight onto itself last week. In the days following the botched coup attempt by sections of the Turkish military, several questions have been asked of the country’s future—most of which have been prompted by President Recep Tayyip Erdoğan’s much-publicized “purge.” In less than a week, almost seventy thousand people were fired from public institutions in Turkey, including police officers, military judges and even schoolteachers. On July 21, Erdoğan declared three months of emergency, allowing him to further curb freedoms in Turkey and even bypass the parliament in drafting legislation.

Erdoğan’s swift and grim response to the coup has naturally invited suspicions. Shortly after the Turkish purge got underway, the Atlantic’s Uri Friedman noted that the “scale and scope” of the response didn’t suggest that Erdoğan was simply acting against those who were part of the coup. “You don’t expel tens of thousands of people from the government in a matter of days,” Friedman wrote, “unless you’ve been keeping tabs for some time on rivals to stamp out and scores to settle.”

The scale of the purge is all the more conspicuous when you consider Turkish politics as a whole. Erdoğan’s Justice and Development Party (AKP) belongs to the tradition of Islamism which advocates the active implementation of conservative Sunni Islam through state policy—a sharp contrast to the Western secularism championed by Mustafa Kemal Atatürk, the founder of the modern Turkish state, and upheld by the Turkish army.

Turkey’s politics has long been torn apart by the ideological battle between Islamism and Ataturk’s secularism. The Turkish army intervened to overthrow governments in 1960, 1971 and 1980. Then, in 1982, a new constitution was drafted, establishing the military and the courts as protectors of Turkish secularism. That was followed by another coup in 1997, when Turkey’s first Islamist prime minister, Necmettin Erbakan, was forced to step down under pressure from the army.

Never before has an Islamist politician wielded as much power as President Erdoğan, and authoritarianism has long been on the rise. Last year, Erdoğan launched a campaign to turn Turkey’s government into a presidential one—a move that was thwarted after the AKP failed to secure the requisite majority in parliament. In the months since, Turkey has seen a widespread crackdown on newspapers, journalists and commentators critical of the Erdoğan regime. Many believe that the purge is only an extension of that process. And with the coup having been defeated—with public support, no less—Erdoğan now wants to make full use of the opportunity to crack down on his biggest political rival: the military.

All of this has serious implications for the Middle East and the West. In a neighborhood of fractious elements, Turkey remains one of the few stable states. That is already being slowly threatened, with recurrent terror attacks striking Turkish targets in recent months, the latest casualty being the Istanbul airport late last month. Turkey has also been notorious for forming the main passage of entry for jihadist fighters into Syria, prompting some observers to call Turkey the Pakistan to Syria’s Afghanistan. If Islamist radicalism were to take root in Turkey under Erdoğan, that could have disastrous consequences, not just for Turkey but also for the rest of the region.

Erdoğan’s crackdown of the military following the coup attempt also threatens to weaken the Turkish army at a time when radical groups are running amok in the region and Turkey’s own national security is fast deteriorating. The last thing Erdoğan wants at this point is frayed relations with the military and demoralized security forces.

For the West, Turkey is now a complicated ally. In the days immediately following the coup attempt, Erdoğan’s government resolutely fixed the blame on Fethullah Gülen, a Turkish cleric based in the United States, and called on the U.S. government to extradite him. Washington demurred, asking Erdoğan to provide clear evidence of Gülen’s involvement. And while the United States supported the Erdoğan regime during the coup attempt, the president’s purge has only attracted admonition from Washington, with Secretary of State John Kerry even warning Erdoğan of suspension from the NATO.

Erdoğan’s cleansing of public institutions now poses a moral dilemma for Washington over how it should deal with a vital NATO ally, just as the anti-ISIS coalition begins to consolidate territorial gains in Syria and Iraq. For Europe, Turkey’s political tumult is much worse timed, with the deal on Syrian refugees already falling apart.

What happens in Turkey in the coming weeks may well decide the course of the Middle East’s immediate future. Erdoğan could choose to be part of the solution in Syria, or he could become part of the problem.

Mohamed Zeeshan is a student of international affairs at Columbia University and a foreign affairs writer for The Diplomat, Swarajya, DailyO and HuffPost India. He has also previously worked with Fair Observer.