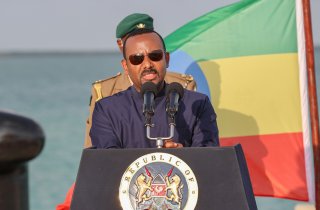 After initial denials, Ethiopia began last summer to fill its Grand Ethiopian Renaissance Dam. The Ethiopian project is already four times longer than the Hoover Dam and will become the largest hydroelectric dam in Africa. When filled, its reservoir will have more than twice the volume of Lake Mead. The Ethiopian government justifies the project in power generation and the country’s development. The fact that the dam lies less than ten miles from the Sudanese border and blocks waters upon which both Sudan and Egypt rely for agriculture makes the dam’s construction an international issue.

In theory, diplomacy might resolve disputes over the dam and establish protocols for water sharing, but Ethiopia’s government has acted with both unilateralism in its actions and obstructionism in its diplomacy in order to create a fait accompli. Ethiopia’s dispute with Egypt gets the greatest press, but the damming of the Blue Nile absent any meaningful coordination has become the rule rather than the exception for Addis Ababa. Ethiopian actions are systematically threatening livelihood and stability not only in Egypt and Sudan, but also in Somalia and Kenya.

Regional states do not oppose Ethiopia’s right to develop hydroelectric power. Egypt has repeatedly affirmed support of Ethiopia’s right to harness the Blue Nile, albeit only in accordance with the principles of international law. Under customary international law, states planning dams or diversions on rivers that traverse international borders have a duty to notify those states with whom they share the river of their planned projects and to consult with them regarding the design specifications. Still, Ethiopia has repeatedly failed to negotiate in good faith. In 2007, the Eastern Nile Technical Regional Office of the Nile Basin Initiative—an intergovernmental partnership comprising ten Nile Basin countries including Ethiopia, Sudan, and Egypt—reportedly concluded that the optimum storage capacity for a hydroelectric dam in the location where Addis Ababa would eventually build the Grand Ethiopian Renaissance Dam was 14.47 billion cubic meters. That number is less than one-fifth of what Ethiopia later constructed.

Following Egyptian protests, Ethiopia ultimately agreed to convene an International Panel of Experts. Their 2013 report was damning. It found that the Ethiopian studies conducted to prepare for the dam were “very basic, and not yet at a level of detail, sophistication and reliability that would befit a development of this magnitude.” Ethiopia nevertheless continued to construct a dam neither designed to maximize efficiency nor to address the concerns of downriver states. In June 2014, Egyptian president Abdel Fattah el-Sisi and Ethiopian prime minister Hailemariam Desalegn agreed to a Tripartite National Committee (to include Sudan) to oversee further studies, but this initiative, in turn, failed as Ethiopia refused to accept the expertise of any international consultant. In March 2015, Cairo and Khartoum tried again and won agreement from Addis Ababa on a declaration of principles to accelerate the completion of studies and to agree on guidelines to govern both the filling of the Great Ethiopian Renaissance Dam and its operation. Unfortunately, Ethiopian diplomats filibustered subsequent meetings and broke understandings with both region states, the World Bank and the United States. Thus, when Ethiopia began filling the dam, it did so unilaterally.

While taking unilateral actions that could impact 98 percent of Egyptians might appear a casus belli—a justifiable one—Ethiopian water unilateralism is not new. Consider Ethiopia’s Gibe dams on the Omo River basin: Ethiopia’s unilateral damming, especially in the Omo River basin, including the Gibe cascade,  devastated the UNESCO-listed Lake Turkana in  Kenya. Its actions threatened the existence of the lake and exacerbated both hunger and conflict in the surrounding areas. Ethiopian actions—taken absent consultation with Kenya—may replicate the Aral Sea disaster in East Africa.

Ethiopia has also taken unilateral actions on the Jubba and Shebelle Rivers that irrigate southwestern Somalia. Both rivers are major sources of freshwater in Somalia. Thus, Somalia is hurt two-fold. It is hurt when Ethiopia unilaterally blocks the Shebelle flow, which undercuts Somalia’s economic development, and when the trash subsequently dumped in its dry riverbed then poisons downstream areas when waters resume. Ethiopian hydropower projects on the Jubba River, meanwhile, threaten both Somalia’s water and food security. It is possible that Ethiopian actions could begin to dry up the Jubba River within a decade. Once again, Ethiopian officials argue that they can take unilateral actions in the absence of an international agreement, but this is inconsistent with international norms, which require prior consultation with riparian countries.

The dam dispute between Ethiopia and Egypt most often garners international press, but the cases impacting Kenya and Somalia show that the pattern of Ethiopian defiance of international norms cuts deeper. While Ethiopia’s hydro-hegemony predates Prime Minister Abiy Ahmed, the Nobel Laureate’s increasing domestic failures have led him to double down on Ethiopian defiance and intransigence. This is his way of presenting himself as a nationalist. Also, this has led Abiy to increasingly lash out at the United States by claiming that U.S. mediation has led to unfair restrictions, power limitations, and back-door colonialism. All of this is nonsense, of course, as Ethiopian power-generation and respect for the rights of downstream countries need not be mutually exclusive. While Abiy acts as a domestic despot, trying to recentralize Ethiopia and strip federalism away from its diverse regions, he is also seeking to act as a colonial power and exploit the countries of the Nile River basin, Kenya and Somalia. Abiy may jet-set around the world seeking adulation from those who have limited knowledge about him and Ethiopia, but the people in Ethiopia and in East Africa see Abiy as a man who takes risks to bolster ego, self-delusion, and Ethiopian expansionism. It is time that the United States, the Western world, the Arab League, and the growing number of African democracies see him the same way and treat him accordingly.