Is the EU on Its Way to Strategic Autonomy? 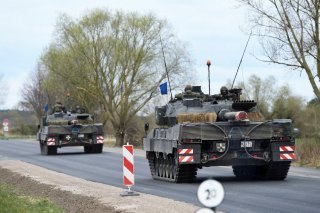 Last month, the European Council approved an ambitious new document, “A Strategic Compass for Security and Defence,” that charts a new path forward for the bloc’s common foreign and defense policies. Since Russia’s invasion of Ukraine, the document’s length has increased from twenty-eight to forty-seven pages and there are numerous references to the conflict throughout. As the document asserts: “The case for a new impetus on EU security and defence is compelling: a more hostile environment and wider geopolitical trends call for the EU to shoulder a greater share of responsibility for its own security.”

If U.S. policymakers are serious about strategic prioritization, then they should be looking to use this opportunity to push European allies farther down this path.

What the Strategic Compass is—and What it is Not

Contrary to Washington’s long-standing anxieties about the possibility of a European security competitor, the Compass does not argue that the EU should displace NATO or the United States as a regional security provider. Instead, it acknowledges that a “strategic partnership with NATO is essential” and that the alliance “remains the foundation of collective defence for its members.” Echoing the statement released by the White House after the first post-AUKUS meeting between President Joe Biden and President Emmanuel Macron, the Compass also calls for EU defense investments and capabilities to be “complementary with NATO.” Far from aspiring to be a competitor, the EU is looking to give itself more options to act, including alongside NATO and the United States.

Accordingly, the list of new defense capabilities described in the document serves two objectives. First, the development of a Rapid Deployment Capacity of 5,000 troops with land, air, and naval elements, as well as increasing operational readiness, stand-by periods, and exercise training for EU battlegroups, is meant to provide the bloc with more hard formidable power tools to use during a crisis. The utility of a rapid response force cannot be understated. In August 2021, for example, many European countries relied on U.S. forces to help extract their citizens from Afghanistan after the Taliban takeover of Kabul. Josep Borrell, the EU’s lead foreign policy representative, wrote in the New York Times that “Europeans … found themselves depending on American decisions. That should serve as a wake-up call.” To that end, a rapid response force will allow the EU to conduct rescue operations in hostile theaters and quickly respond to emergencies without relying on or asking for U.S. assistance.

Second, the Strategic Compass aims to invest in “strategic enablers” that would indirectly help fill the gaps in NATO’s operational and force infrastructure. This has been a persistent problem for decades, with most high-end equipment and capabilities for the alliance provided by the United States. To remedy this deficit, the Compass tasks the bloc with investing in independent airlift, transport, amphibious, satellite, communications, cyber, and intelligence, surveillance, and reconnaissance capabilities. Perhaps even more importantly, the document emphasizes developing more dual-use transport infrastructure within the EU to improve military mobility. During a crisis, this will be essential for the EU to organize and coordinate military operations rapidly and efficiently.

Strong commitments for fully maximizing programs like Permanent Structured Cooperation (PESCO), the European Peace Facility (EPF), and the European Defence Fund (EDF) are also described. PESCO, an initiative launched by the European Commission to finance joint platform development, has fallen short of expectations, with most projects lacking funding and stuck in the conception phase of development. Conversely, the European Council authorized €1 billion of lethal and non-lethal military assistance to Ukraine through the EPF in February and March, marking the first time the EU has shipped lethal aid abroad to a third country. Similarly, the European Defence Agency, which oversees the budget for the EDF, recently announced that its funding for defense industrial base investments increased from €50 in 2020 to €420 in 2021. For each program, the European Council identifies benchmarks and timetables for implementation and review. Given the varying appetites of European domestic audiences for greater military spending, only time will tell whether member states will be able or willing to meet these commitments. Still, these investment vehicles will be essential for synchronizing joint platform development and strengthening the bloc’s defense industrial base.

Where the Strategic Compass Goes Wrong

Taking a cue from Washington, the European Council embraces a strategic distraction by promising to increase its naval presence in the Indo-Pacific through port calls, joint exercises, and freedom of navigation operations. Most EU members should hardly be considered formidable regional actors, let alone global ones. As a November 2021 report from the Center for Strategic and International Studies notes, in addition to their perennial readiness and operational deficiencies, major European militaries “will continue to struggle to conduct several types of missions without significant U.S. assistance.” While capable of conducting low-intensity operations such as evacuation, humanitarian, and peacekeeping missions, “European states still lack sufficient heavy maneuver forces, airlift, naval combatants, missile defense, and support capabilities, such as logistics and fire support,” to engage in high-intensity combat with competitors such as Russia.

Aside from being a misallocation of scare resources, major European powers do not have the same concrete security interests in East Asia as the United States does to make an investment in global presence missions worthwhile. China, which the Strategic Compass labels a “systemic rival,” knows that Europe has no interest in embracing Washington’s neo-containment strategy for a “new Cold War.” Furthermore, if a war erupted over Taiwan or in the South China Sea, Europeans would not send their frigates to join the fight and likely limit their opposition to rhetorical condemnations and limited sanctions.

If the EU wants to be “a stronger and more capable” geopolitical actor, it would be better served maximizing its security contributions to the European theater—a large and geographically diverse region with a periphery extending from North Africa to the Eastern Mediterranean in the south, and the North Sea to the Baltic Sea in the north. Political instability and great power aggression in its near abroad demand that the EU maintain a laser-like focus on building up naval armaments conducive to deterring threats in its immediate vicinity.

The Limits on EU Defense Integration

Several factors will shape the trajectory and scope of EU efforts to pursue strategic autonomy. By acknowledging NATO as the “foundation for the collective defence of its members,” the Compass implicitly acknowledges the EU’s junior status in the transatlantic relationship. If the EU wants this to change, it will have to gradually expand its security responsibilities and capabilities beyond what it has already outlined. Given that many of the EU’s most important actors are members of both organizations, there may come a point, perhaps decades from now, when EU defense integration efforts begin to challenge NATO’s primacy. Whether the EU’s most important members will be willing to sustain this dual security architecture arrangement over the long term is an open question.

For example, how much will Berlin be willing to invest in providing the EU with hard power capabilities while the United States and NATO remain its primary security provider? The answer is contingent on two inter-related developments: whether German political elites alter their long-standing preference for the American security umbrella and if Washington begins to downgrade its role within NATO. Unless the United States moves to reduce its forward defense commitments in Europe, German political elites will want to maintain the status quo arrangement. The bargain offered by Washington is simply too generous to give up and Berlin has resisted French efforts to make the transatlantic partnership more co-equal for Europeans through strategic autonomy. However, if the United States begins to shift the burden for regional security onto its European NATO allies and downgrade its leadership role within the alliance, Berlin could begin to hedge against U.S. retrenchment by investing more in collective EU defense efforts rather than filling the void left in NATO.

The reaction of Poland and the Baltic states will also be important. Traditionally, these peripheral states have condemned the pursuit of strategic autonomy as a threat to transatlantic unity. Understandably, they view Washington as a more reliable and capable partner for deterring Russia than France and Germany. If the EU is going to become a regional security provider, then Brussels will need to give Poland and the Baltic states a stake in the project to gain their support. Whether Brussels and Paris can win them over remains to be seen but, like Germany, these peripheral states could begin to hedge through the EU if Washington downgrades its role within NATO and begins to withdraw U.S. military assets.

Finally, the Compass attempts to remedy a long-standing constraint on rapid and flexible collective decisionmaking. It stipulates that the European Council will “decide on practical modalities for implementing Article 44 of the Treaty on European Union, in accordance with [Common Security and Defence Policy] decision making, to allow a group of willing and able Member States to plan and conduct a mission or operation.” This “coalition of the willing” provision cuts both ways. On the one hand, it can facilitate missions that select members of the bloc have an interest in conducting. A good example would be the March 2020 authorization of EU naval and air assets to enforce the United Nations arms embargo on Libya, known as Operation IRINI. Out of the eight assets deployed, five came from countries with Mediterranean coastlines.