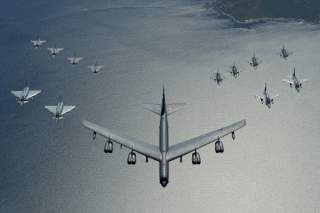 Who wants to be policeman of the world in the twenty-first century? America has tried the role, bless it, and the results have yielded little joy. The greatest military machine mankind has ever seen can’t seem to win a war. The conflicts in Vietnam, Korea, Afghanistan, and Iraq all proved to be great wastes of American treasure and blood. Even the apparently successful U.S.-led interventions, such as in Libya in 2011, have led to disaster. What the historian Andrew J. Bacevich calls America’s “War for the Greater Middle East” has proved to be its unmaking as the world’s undisputed superpower. America’s quest to spread its freedom, abundance and security has ended up reducing its freedom, abundance and security.

The age of American primacy, as we know it at least, is approaching its end. The “unipolar moment,” which followed the Cold War, was always fleeting. The American super-supremacy of the 1990s and early 2000s has faded. A strange, arguably “post-polar” world order, in which nothing is as it seems, has emerged in its place. The United States, under the presidency of Barack Obama, has adopted the strategy of “leading from behind”—much to the chagrin of neoconservatives everywhere. But what Obama really meant was America still trying to lead from the front, as before, but with added reluctance. China the rising giant, but its economic growth international ambitions are mysterious and opaque. Russia is often said to be a diminishing force—its economy too reliant on outdated fossil fuels—yet it is achieving its strategic goals where every other major power is failing. Thanks to a sophisticated information machine, the Kremlin’s soft power is more potent than at any time in the last thirty years.

One apparent constant is the decline of Europe. The European Union, paralyzed by debt, is suffering a major political crisis. Populist, anti-Brussels parties are thriving across the continent. On June 23, the British surprised everyone—including, perhaps most of all, ourselves—by voting to leave the EU. The Union remains, for all its problems, the second biggest economic force in the world, but for hard power it relies almost completely on American goodwill and military might.

How long can—or should—America continue to favor Europe with such a benevolent hegemony? Donald Trump may be a disastrous presidential candidate, but his position on NATO is coherent, even if it is not a message impoverished Europeans want to hear. Like President Obama, he asks why should Uncle Sam continue to protect Europe’s strength—when America pays the “lion’s share” (about 75 percent) of NATO defense spending. “NATO is unfair, economically, to us, to the United States,” says Trump. "Because it really helps them more so than the United States, and we pay a disproportionate share.” That's a good point. It’s not as if Europeans—or the rest of the world—are particularly grateful for America’s generosity. Social Democrats everywhere sneer at Uncle Sam and call him names behind his back. We don’t jump to condemn nations that call the United States the “Great Satan.” And yet, whenever trouble brews, anywhere, we expect the indispensable nation to sort it out.

America could afford to put up with such an inconstant and ungrateful allies when its primacy was beyond doubt. Now, not so much. Rebalancing, or even abandoning, NATO would upset a lot of pundits, special advisers, and security contracts, but it makes more sense than the status quo. America’s relationship with Europe’s leading powers has for too long been held together by a sentimental sense of Western progressivism, and the “special relationship” with Great Britain which has endured, for better or worse, since the end of the Second World War.

Now, however, Britain appears to be on its way out of the European Union, and the EU itself is in for a tumultuous future. Realpolitik should dictate that America, whether it is lead by Trump or indeed Hillary Clinton, continues the Obama’s strategy of demanding more from European powers in the worldwide defense of democracy. America might instead look to Germany, the EU’s major economy, as its first diplomatic port of call in the coming years. (Trump has promised Britain that we would be first in queue if he becomes president—he meant it as a rebuff to Obama’s warning that we would be last if we voted to leave the EU—but most people know not to believe him, and assume that anyway he won’t be president.)

America redefining its relationship with Europe would involve many diplomatic difficulties, but it need not mean a substantial deterioration of relations. Here in Britain, we might grumble about betrayal—especially since we, unlike our European partners, followed the United States into the folly in Iraq—but we should learn to live in the twenty-first century. America’s interests cannot be conditioned to suit British pride—or anybody else’s.

Moreover, perhaps the British and the Europeans might learn to stop taking America’s support for granted. That, in turn, could lead to a renewed respect for the world’s leading power, and return of a different and stronger American primacy.

This is the ninth in a series of essays on the future of American primacy. You can read the previous essay, “The Era of American Primacy Is Far From Over” by Hal Brands, here.