Europe Confronts ISIS at Its Gates 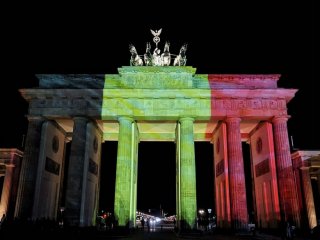 According to the coalition fighting against ISIS, led by the United States, between September 2014 and July 2015 Belgium executed nearly 800 sorties and 163 airstrikes over Iraq. They were set to resume these operations this summer, battling its militants after its claim of responsibility for the twin assaults in Belgium's capital of Brussels that killed more than thirty people and wounded about two hundred others.

The two loud explosions took place at Brussels Airport shortly before seven o’clock in the morning on Tuesday. The first happened outside security checkpoints for ticketed passengers and near the airline check-in counters; the other—the subway station blast—happened in the Brussels district of Maelbeek, near the heart of European Union, and NATO headquarters. “Islamic State fighters opened fire inside Zaventem Airport, before several of them detonated their explosive belts, as a martyrdom bomber detonated his explosive belt in the Maelbeek metro station,” reported the Amaq website, which is affiliated with the terrorist group. “This is an attack against our values, our freedom, and our democracy,” Brussels Mayor Ivan Mayeur said at a press conference after the tragedy. “We won't let anyone attack our values in a cowardly way,” he added.

Belgium has raised its terror threat level from three to four (the maximum), which means that the army can be sent onto the streets in order to meet high security needs. Another 1,600 police officers have been deployed throughout France after the Brussels attacks, according to French Interior Minister Bernard Cazeneuve, speaking after an emergency meeting with President Francois Hollande, who said in a statement that “through the attacks in Brussels, the whole of Europe has been hit.”

NATO also increased its own alert level and condemned the assaults. “This is a cowardly attack, an attack on our values and on our open societies. Terrorism will not defeat democracy and take away our freedoms,” NATO Secretary General Jens Stoltenberg said in a statement.

The very same rhetoric came from the European Union leaders who echoed Stoltenberg’s convictions in their joint statement, where they describe the bombings as an “attack on our open democratic society,” adding that they “will be united and firm in the fight against hatred, violent extremism and terrorism.”

Prime Minister David Cameron, who chaired an emergency Cobra meeting to determine his country’s response to the attacks, emphasized that “they could just as well be attacks in Britain or in France or Germany, or elsewhere in Europe and we need to stand together against these appalling terrorists and make sure they can never win.”

Indeed, according to Europol’s press release dated January 25, 2016, “Europe is currently facing the most significant terrorist threat in over 10 years,” and “the Paris attacks on 13 November 2015 indicate a shift towards a clear international dimension of Islamic State to carry out special forces style attacks in the international environment.”

President Barack Obama’s statement at a news conference in Cuba insisted that “we must be together regardless of nationality or race or faith in fighting against the scourge of terrorism,” saying that “we can and we will defeat those who threaten the safety and security of people all around the world.” But it was Obama with other Western leaders, certainly not any democratic allies in the Middle East, who have waged the great offensive aiming to support the Syrian opposition’s struggle to remove President Bashar al-Assad from power—at the very moment when ISIS finally received the West’s full attention.

As the terrorist group has now become the prime enemy of European governments, I have no doubt that the main reason for the current state of emergency on the continent is Western leaders’ inability to think outside the melioristic box, which accounts for their failure to learn from previous experience in the Middle East. It seems that, as John N. Gray has observed, “they cannot accept that by removing one kind of evil they may succeed only in bringing about another. . . . They need a narrative of continuing advance if they are to preserve their sense of being able to act meaningfully in the world, so they are driven again and again to re-enact their failures.”

The signs are clear that these three suicide bombers could finalize their plot; Europol suggested in a report published earlier this year that after the Paris attacks, there is “every reason to expect that [ISIS]. . . will undertake a terrorist attack somewhere in Europe again. . . intended to cause mass casualties amongst the civilian population,” having “developed an external action command trained for special forces style attacks in the international environment.”

Furthermore, we knew that according to an ISIS video released on January 24, 2016, the group is planning further attacks against “the West,” and they are quite specific when it comes to pointing out their targets.

And while the West is busy bullying the Visegrád Group for its stance toward the refugee problem and necessity to protect European identity, I believe Warsaw, Budapest, Prague, and Bratislava—these great capital cities of Europe—should immediately rethink their relationship with the European Union, as it seems that this time the outcome of the arrangement, evoking Baroness Thatcher’s wisdom, will be “far from happy.”

Adriel Kasonta is an Editorial Board Member at the Central European Journal for International and Security Studies, and Researcher on the Europe Desk at Wikistrat. Kasonta is also a member of the Conservative Party (UK), and former Chairman of the International Affairs Committee at the oldest conservative think tank in the United Kingdom–The Bow Group (2014-2015).