Europe Needs to Calculate for the U.S. Military's Shortcomings 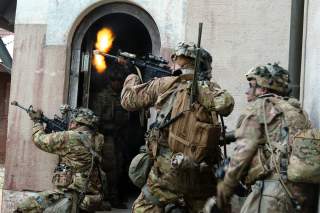 “No, Sir!” replied James Mattis in 2017, when asked if the United States could fight two wars simultaneously. Thereby, he had made it unmistakably clear that America could not fight two major powers at the same time.

While America’s strategic limitations have not withered away, a serious debate about the implications has not occurred. This has to be recognized as an urgent problem. Putin’s support for Trump during the 2016 election campaign, the latter’s repeated questioning of NATO’s Article 5, the new trade war against China and other crises, including Iran, have all generated news but obfuscated the most vital and simmering question of today: assuming that Mattis is right, how will the United States, if at all, address the empty strategic space created by its decidedly limited capacity to confront and, if necessary, fight China and Russia at the same time?

At the moment, Congress views itself as a bulwark against any softening of U.S. policy regarding Russia. The suspicion that some lawmakers have about Trump’s sympathetic relationship with Putin helps, to some extent, compensate for the loss of White House credibility in the eyes of European NATO partners. In fact, while the alliance has seen squabbles amongst its members about its cohesion and strategy throughout, today attaining such cohesion is about alienating the U.S. President from the Kremlin’s leader. Whether or not Congress, or European allies for that matter, will be successful in that endeavor remains to be seen. But such is the central focus of transatlantic attention for now.

However, it may be worthwhile to ask whether this is actually still the most useful way of looking at the world’s main strategic theatre. In fact, given that China has been singled out as the United States’ key strategic rival for years to come, there is an urgent need to envision an increasingly likely and substantively different future of strategic affairs. Not the least because if Trump were to escape impeachment and win re-election, which is not improbable, then domestic in-fighting could fizzle. Significantly, this dominant antagonistic U.S. focus on China will require Europeans to devote serious attention to the strategic meaning thereof regarding Russia, bearing in mind Mattis’s straightforward remark. For their part, European states must astutely anticipate its future implications and start shaping events in their own strategic interest now.

More precisely, Trump will soon point to China as the overwhelming challenge to America, economically, militarily and, more generally, in terms of “who is the top dog in world politics.” An ongoing trade war, increasingly probable military accidents and a president fiercely drumming up domestic animosity towards China could convince significant parts of the American public that Beijing’s—undeniable—ambitions have become the greatest threat to national security. Once re-elected, it is not unlikely that the president will receive bipartisan support for his exclusive prioritization of China (over Russia). In fact, Trump will likely argue that, in order to allow America to comprehensively focus on China, a rapprochement with Russia is strategically needed and, while not mentioning Mattis, unavoidable. As for the Europeans, they should immerse themselves rather quickly into the study of the implications of America’s exclusive strategic focus on China. Crucially, they should fully exploit the strategic potential of the available room to maneuver between now and 2021 in order to be able to preserve European security and interests.

Russia, though, would first need to accept the idea of a rapprochement. As ever hard-nosed diplomats, it is hard to believe that the Russians, after thirty years of perceived humiliation by the West since losing the Cold War, would be smoothly lured into the American offer and have themselves easily divided from their powerful, more ideologically compatible, Chinese partner. Although, the notion of America being in the much longed-for position of having to bargain for Russia’s help, and agreement, in its competition with Beijing could certainly help change the minds of the Russians. In fact, if they came to view this U.S. realpolitik offer as an opportunity to tighten their grip on Europe, and accepted it at last, they would quite logically attach a price to their agreement. Naturally, the Kremlin would stipulate its terms and would clearly hold strong cards in any negotiations about it; such a price will be higher the more intense the competition between the United States and China has become. Rather uncomfortably for the Europeans, such compensation for Russia’s giving up of its alliance with China would come mainly at their expense.

Given the prospect of a free hand over Europe, what exactly would Russia’s price be and how would it aim to claim it? Under Putin, Russia’s perceived geostrategic vulnerability has been powerfully historically charged. He reads 1991 as the imposed loss of the strategic buffer zone, which the Soviet Union claimed as compensation for its contribution to victory in World War II. Keeping in mind the many speeches in which Putin has left no doubt that, to him, the end of the Cold War was the worst geopolitical event in Russia’s recent history. One way of reading his intentions is that the restoration of as much as possible of this Warsaw Pact buffer would be a suitable prize. If so, then Putin will have learned lessons from observing the U.S. and British expeditions in Iraq and Afghanistan. They demonstrated very clearly that although it is possible to win territory with military force, holding on to it in the face of an angry and mobilized population is a formidable, very expensive and enduring undertaking. It costs in blood and treasure abroad and in popular support at home as expenses and casualties escalate, as definitive success seems far off and international opprobrium and sanction mounts.

Putin may have concluded that Russia cannot hold on to European territory that it has taken by force, where the population does not naturally cleave to Russia and will actively oppose occupation. So, because Putin still firmly believes that he is entitled to a sphere of influence, he may conclude that there are other states, or parts of states, where, under the new circumstances, occupation may be locally tolerated, even welcome. He may identify Moldova, more of Ukraine, and Belarus as prime targets for such partly forced toleration. Putin would likely add areas of the Baltic states to his prize list, especially to regain direct access to the military enclave of Kaliningrad. He would do so if he believes he has the tacit support of enough of the Russian minorities in those areas and if the Baltic states are individually much smaller than Afghanistan or Iraq—or if at least sections of those states are smaller—and may therefore be more easily brought under the Kremlin’s rule or acquiescence.

Putin knows that right now Russia has established a slight comparative military advantage over a distracted and sleepy NATO by investing in modern capabilities, such as air and missile defense, long-range precision conventional fires, cyber, and the manipulation of social media at scale. He may feel he can act decisively, keep NATO (especially without major U.S. support) at arm’s-length, and hold European nations’ homelands in real jeopardy. So the Kremlin may already sense the ease with which it could breach Article 5 on a strictly limited basis with the military forces that it has. Perhaps Putin could take advantage of the vastly greater political and military challenge NATO would face in mounting a response and act before the long-term implications of Russia’s declining economy and fragile public opinion diminish his ability to seize a moment in history.

As a caveat, while it may be accurately assumed that strategic thinking is largely based on a rational cost-benefit analysis, neuroscience reminds us that emotions, such as fear or pride, are absolutely integral to decision- and strategy-making. Given that Russia would for the first time, after more than seventy years, face a Europe that was militarily speaking no longer dominated by American forces, the possibly vast emotional effect on potential Russian decisions should not be discounted. As much as an effective balance of power possesses important psychological elements (of reassurance), a balance that is in the process of breaking apart will most definitely unlock alternative psychological consequences. In particular, Russia may succumb to its own hubris. Propelled forward by an over-confident understanding of its initial edge over European militaries, it might even be tempted to exploit the U.S. withdrawal by employing the doctrine of “escalate to de-escalate” by threatening or even using tactical nuclear weapons. Undeterred by NATO’s now obsolete tripwire, Russia’s military could thereby advance deep into the chosen parts of Europe. Put briefly, Russia’s relative overall material weakness is no absolute guarantee for a rational cost-benefit analysis, if it invests great hope in the early use of its current military advantages.

Anticipating a U.S.-Russia rapprochement, how could Europeans seriously affect Putin’s calculations? In the first instance, they could talk to the Americans once more and remind them of the value that friendly coasts provide for sea-based powers, of the significance of the roughly $600 billion of investments on the European continent, and of the value of advocating shared values in what is becoming a contest for the order that defines how the world works. Whether this would alter America’s calculations and perceptions of China and Russia when its primacy is at stake, however, can by no means be safely assumed. After all, the Europeans themselves already largely agree with America’s perception of China. If unwittingly, then they have thereby encouraged the pro-Russia logic underlying a U.S. rapprochement strategy. It is hard to see how the Europeans could realistically oppose and deflect such a strategic move on the part of the U.S. president.