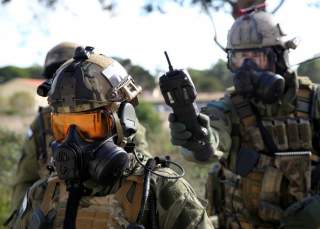 In 2010 the Swedish parliament, having decided it no longer needed the large armed forces that had for centuries defended the country, suspended the mandatory draft. The following year, so did Germany. Other European countries including France, Italy, Latvia and Lithuania likewise scrapped or suspended conscription as they concluded that large-scale defense was no longer necessary. But now the draft is making a comeback in Europe.

Johan Wiktorin, a Swedish former army officer who is now a security columnist and consultant explained the difficulties his country faced in transitioning to an all-volunteer force: “Volunteer soldiers are not in our culture, and it has been difficult for the armed forces to compete on the labor market.” As a result, the Swedish Armed Forces are having trouble recruiting soldiers, even at the reduced manpower requirements for a volunteer military. With the country’s healthy economy generating plenty of job opportunities, only the most dedicated young men and women will voluntarily join the armed forces—and there have turned out to be too few such people.

What’s more, with Russia looming larger than it has in decades, Sweden is moving to address its manpower shortage. This month, a government-appointed rapporteur is expected to recommend a return to the draft. According to the daily Svenska Dagbladet, the rapporteur—Annika Nordgren Christensen, a former Green Party MP who served on the parliament’s defense committee—will recommend that starting next year, all seventeen-year-olds will be registered for the draft, with selection taking place when they are eighteen. Unlike the previous draft, the new one will—if passed by parliament, as is likely—also include women. That will bring Sweden in line with Norway, which has already expanded its draft to women, and several other European countries that are considering doing so.

Other European countries face the same dilemma as Sweden: how to recruit soldiers when extremely few young people have had any interaction with the military. Teenagers decide they want to become doctors—or even bankers—based on their experience with medicine or banking, but the military? Past generations’ draft served not only to train reserves but to open young men’s eyes to the military as a career choice. In short, Europe is once again focusing on territorial defense.

Not surprisingly, other countries are rediscovering the draft too. In France, the draft is now being discussed as a response to terrorism, with Socialist Party presidential contender Arnaud Montebourg proposing a six-month general draft. In Germany, politicians such as the Christian Democrats’ parliamentary leader in Lower Saxony, Björn Thümler, argue that Germany should think about a return to the draft. (The Bundestag vote on March 24, 2011, suspended it rather than abolishing it altogether.) Thümler told the daily Die Welt: “It would be a way of preventing potential crises and would also ground the Bundeswehr in society more widely again.” Professor Patrick Sensburg, a CDU member of the Bundestag, argues that reinstating the draft would help Germany create “home defense battalions” to protect critical infrastructure.

A new civil defense white paper introduced by German interior minister Thomas de Maizière last month also brings up the draft, albeit in a circuitous way. Detailing contingency measures, the white paper mentions that Germany’s postal service has to prepare to efficiently deliver post, for example call-up papers from the Bundeswehr in the event of a return of the draft. But most decisionmakers oppose bringing the draft back, with Defense Minister Ursula von der Leyen arguing last month that it would bring “no added benefit.”

To what extent did military leaders support or oppose the suspension of the draft? I asked Vice Admiral (ret.) Lutz Feldt, a former chief of the German Navy. Military leaders had an intense discussion at the top level about the best way forward, he explained, adding: “We told the politicians that we wanted to keep the draft, but only if it was for 12 months. Less time than that doesn’t make sense.”

While German conscripts were still serving fifteen months in 1990, by 2010 the draft had been reduced to six months. But in reality few people were actually drafted: many opted for the civilian option known as Zivildienst instead, while others found less legal ways out of military service. “You could get an exception if you knew the tricks,” Feldt said. “The mass contact with the military didn’t exist anymore.”

Feldt remains in close contact with active-duty staff. And today, he told me, officers feel it would be hard to reintroduce the draft. For one, the Bundeswehr lacks the large number of training officers needed to drill large classes of conscripts. But at the same time they realize that with its 176,841 soldiers and officers, the Bundeswehr is relatively small. With its six thousand active-duty soldiers, Estonia has 221 citizens per soldier, while there are 459 Germans per each active-duty soldier. The United Kingdom has 144,120 soldiers and officers. Rather than a return to the full-blown draft, many German officers instead support an expansion of the already existing voluntary draft: initial short training followed by twenty-three months of active duty. That offers voluntary conscripts the opportunity to subsequently move to active duty.

European countries flirting with the draft are not treading uncharted territory. Last year Lithuania, which suspended conscription in 2008, reintroduced it, initially for a period of five years. This year parliament made the draft permanent. At the same time parliament voted to establish a second brigade. In 2015 the armed forces drafted three thousand male conscripts for a nine-month conscription period; the same number was drafted this year, and starting next year 3,500 young Lithuanians will be drafted annually.

Rimas Ališauskas, head of defence policy section at Lithuania‘s Ministry of Defense, told me: “The manning shortages were acute across all land forces even before the establishment of the second brigade, and the second brigade has only increased the demand for personnel.” He continued: “And the draft also serves as a way of training the reserve. The conscripts who don’t opt to stay on as professional soldiers automatically join the reserve.”

Using the draft as a recruitment tool for the armed forces’ professional positions seems to be working in Lithuania. Ališauskas told me that some 20 percent of the conscripts to date have said they want to stay on as professional soldiers. While a brigade usually comprises some four thousand soldiers, Lithuania’s second brigade remains understaffed.

At the moment, the Lithuanian Armed Forces have the luxury of choosing their conscripts: according to Statistics Lithuania, the country’s statistics agency, 37,812 Lithuanians (about half of them boys) were born in 1997 and about the same number the year after. But birth rates are in sharp decline—only 30,459 Lithuanians were born in 2012—and hundreds of thousands of citizens have migrated to other EU countries. Since 1990, Lithuania’s population has dropped from 3.7 million to 2.9 million. In the future, predicts Ališauskas, the country may really have to draft youths rather than just selecting the most willing and capable ones as is currently the case.

Back in Sweden, six years after the draft was suspended there’s now a political consensus that it should be reinstated. “There are two arguments driving the draft debate,” Wiktorin said. “The first argument, pushed by the [ruling] Social Democrats, is an ideological one: ‘We’re a small nation and everyone needs to work together.’ The second one, pushed by the Liberals, focuses on efficiency.”

Even if Sweden returns to the draft next year, as seems likely, it won’t be as easy as just calling up enough eighteen-year-olds. Facilities and shooting ranges have been sold (often for a song); instructors have retired. “But even with the cost of buying new facilities and training more instructors, the draft will be cheaper than professional soldiers,” Wiktorin added. “And we’ll get information about all the young people in the country and get to choose the ones we want.”