Europe Is Stuck between the United States and Russia 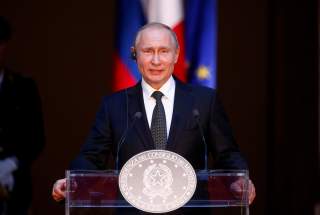 For those monitoring Russia policy, the Democratic Party debates proved something of a welcome relief. After all the ink and airtime devoted to Russia in American media over the last three years, questions related to Russia hardly came up at all. It has indeed been profoundly disturbing for this sometimes “Russia-hand” to watch the total conflation (and yes, denigration) of American foreign policy with domestic politics in regards to this crucial bilateral relationship.

Still, it seems U.S.-Russia relations are hardly out of the woods. Many foreign-policy aficionados did not take kindly to President Donald Trump appearing to share a joke over alleged election meddling with President Vladimir Putin at the G20 in Osaka. All joking aside, the reality is that this most fundamental relationship continues to list badly and is in real danger of sinking in the abyss. Despite having a U.S. president that is allegedly pro-Russian, the United States and Russia have now witnessed the dangerous escalation of military conflicts in both Ukraine and Syria, the deployment of more U.S. forces into Eastern Europe, along with ever larger NATO exercises along Russia’s flanks, not to mention the near complete collapse of essential arms control initiatives, along with a dangerous political crisis over the future of Venezuela.

Perhaps these tendencies should not be surprising, given a generation of American foreign policy elites raised on watching The Americans. And European friends have been able to enjoy the similarly titillating Occupied, a Norwegian series depicting a Russian conquest of that country. Who needs truth or rationality when all can be cleverly explained by Hollywood’s geopolitically inclined “artists” or the Norwegian equivalent? Never mind that Maria Butina was never in the same league as the beguiling Kerri Russell. However, let us return to reality and briefly examine the crucial issue of the Nord Stream natural gas pipeline that will connect Russia and Germany to see where the interminable Russia hysterics now lead.

An article from late June in the Russian language business-oriented newspaper Kommersant reviewed the current bidding, noting that the Congress could be close to passing a law entitled “Protecting Europe’s Energy Security Act of 2019.” According to this article, “In fact, the legislation is aimed against ‘Nord Stream-2’ and ‘Turkish Stream’ [Фактически законопроект направлен против проектов ‘Северный поток-2’ и ‘Турецкий поток’].” With some evident relief, the article notes that the “law is not likely to directly influence the building of the gas pipeline” under the Baltic, and that line is expected in this analysis to be completed in November 2019. Likewise, the “Turkish Stream” pipe is already laid across the Black Sea, so its completion will not be blocked by U.S. legislation, according to this report.

The fate of the Baltic route apparently depends to a high degree on the Swiss firm Allseas. The Kommersant article observes that the Swiss company does not have major projects in the United States. Another analysis in the newspaper Nezavisimaya Gazeta agrees, contending that Allseas is a “family business” and, furthermore, that its “orders with Gazprom are very important to the business [заказы ‘Газпрома’ для нее очень важны].” The second analysis explains that the pipe is now being laid in Finnish waters, and that such underwater work is 60 percent complete.

Citing the expert Igor Yushkov from the Finance University of the Russian government, the point is made that Russia faces some risk because Gazprom does not possess the capabilities to lay the pipe on its own. It is reported that the only candidate Russian vessel, the Professor Cherski [Академик Черский] currently remains at anchor “without moving [без движения]” in the very distant Pacific port of Nachodka. But, in the end, Yushkov projects that “the gas pipeline will nevertheless be completed.” He maintains that “ in Europe, everyone knows extremely well why the USA is so actively opposing North Stream-2 [в Европе все прекрасно понимают, почему США так активно противодействуют СП-2]. He accuses Washington of wanting to demonstrate the undependability of Moscow as a supplier, to raise the price, and to gain market share for American gas producers.

America’s hostility toward the new Russian pipelines is rather bipartisan, but the mood in Berlin in decidedly unsympathetic to Washington’s concerns. After the last few years of tumult, it seems the German foreign policy elite is not so enthusiastic about American leadership. For example, a February 2019 analysis published by the Berlin-based SWP (Institute for International and Security Affairs), Europe’s largest think tank, argues that the American attempt to limit Russian gas imports to Europe is “aimed squarely at the German federal government, which was described by President … Trump as a ‘prisoner of Russia.’” In the very first sentence of the analysis, the authors candidly state: “The increased use of economic instruments of power in U.S.policy towards Russia is negatively affecting European and German interests.”

The German analysis is based primarily on price calculations, but also opposes American restrictions on European autonomy, noting the impact of new U.S. sanctions on Russia for “EU-based companies . . . is serious.” Left unspoken, of course, are the very substantial geopolitical arguments that actually favor German-Russian partnership. Was not the bloodiest battle of the bloodiest campaign of the bloodiest war in world history fought between these titans? After nearly three centuries of ferocious rivalry over Eastern Europe, moreover, it is not time to focus on peace, partnership and prosperity?

Instead of Americans trying every form of stunt to decouple Russia from Europe, they should alternatively strive for enhanced interdependence and an inclusive European security architecture that offers Moscow a seat at the table. It is not all that far-fetched as the recent news regarding Russia’s reinstated voting rights at the Council of Europe suggest. Positive movement on the delicate issue of Ukraine can help along the process of reconciliation, moreover. Russia’s early 2019 agreement to enable German and French experts to monitor the Kerch Strait is certainly a move in the right direction.

Still, more than a few opportunists, on both sides of the Atlantic, continue to try to stoke hostilities with Russia. One shudders to think how many cyber-security firms would be put out of business if Russia’s relationship with the West were to substantially improve. Many Washington think tanks would also have to shed legions of young “hybrid warfare” experts.

One dependable way to get the media talking up the Russian threat once more will be to chew over the July 2014 downing of Malaysian airliner yet again. That sad and preventable tragedy took the lives of 283 people. No journalists, however, have apparently thought to ask why it was that a civilian airliner was allowed to over-fly an active war zone, which had already witnessed the shoot down of numerous aircraft in the months prior to this incident. Of course, that would probably shift blame to both the airline and also the air-controllers who plan routes at the Dutch airport of origin, not to mention European aviation authorities.

As any military analyst knows well, the “fog of war” is intense and civil wars are particularly cruel. Aware of that fundamental reality, Europe, Russia and the United States should join together to salve the wounds of the last five years, putting aside the stampede to place all blame on one side or the other. Volodymyr Zelensky appears to have defied the “experts,” and been elected with a landslide victory on a platform of peace and compromise. If and when such a peace initiative genuinely materializes, that effort should be supported to the utmost. The peoples of Eastern Europe, and Ukraine in particular, need healing and reconciliation, not further escalation, nor irrational and inefficient economic “decoupling.”