Europe Will Not be Strategically Sovereign, Unless it Compromises on the Russia Question 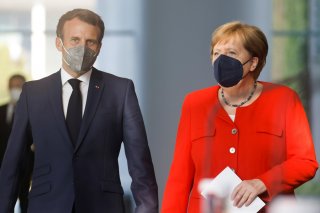 Eastern Europeans are livid at the German and French overture to Russian President Vladimir Putin. “Dmytro Kuleba, foreign minister of non-EU member Ukraine”, the Telegraph reported, “said the German-French push was a “dangerous deviation” from the EU’s sanctions policy against Moscow.” That was not the only rebuke. Poland and the Baltic states are spearheading a vicious rebuttal against what is considered a Franco-German-led EU détente without any consideration for other EU countries. Particularly strong was Lithuania’s reaction, calling the Franco-German initiative “irresponsible” and a case of “historical myopia”. Faced with a growing split, the EU council also took a hard line against Russia, which was especially humiliating (per Politico) for Angela Merkel in her final days.

Germany and France did not obviously expect such a strong pushback. Especially, after the fact that there was almost zero pushback by any of the Eastern or Central European countries, after a very similar summit between President Biden and President Putin. What Merkel and Macron suggested was no different qualitatively than what Biden argued--that while Russia is an adversarial power, interests must be accommodated and Russia must be engaged in a dialogue. This was in a way the first instance where the objections of the frontiers led to a rebuke of the core, which is unprecedented and will have implications for the much-vaunted “strategic sovereignty” of Europe, as well as jeopardize any American reset with Russia.

The reality is that if the EU wants to be strategically self-sufficient, it needs some form of stable accommodation with Russia and to understand Russian interests. That is the nature of geopolitics: the clue is in the name, and geography is destiny. A strategically independent Europe needs, of course, some compromise with an adversarial nuclear power next door, a form of “negative peace”. That would in turn entail some tough decisions about limits of both EU and NATO expansion, as well as common interests with Russia. Unfortunately, the flaw in that plan, is that the EU is not a real military power, and has no way to stop forces within which oppose this accommodation and compromises.

For example, the Eastern European states, particularly Poland, are rightly somewhat cynical of Russian intentions. Their threat perception about Moscow is not the same as the ones shared by Paris and Berlin. They are geographically close to Russia and have historical skepticism of Russian power. They are also dependant on the American nuclear umbrella and subservient to neoliberal institutionalism. The Baltic states, for example, were at the forefront in their support of Euromaidan as well as the Ukrainian war against Russian-backed rebels. They are evangelizing about liberalism in Belarus, and are supportive of Belarussian dissidents; issues that are enough to jeopardize any reset between EU/US and Russia. The EU has no answer to this paradox, as the EU is a normative power. As Kadri Liik recently pointed out, “Biden managed to change the tone of the US relationship with Russia, and this is good. The EU, however, cannot replicate the trick right now. The US had agenda with Russia where progress was possible. The EU, for the moment, does not, because... the EU is a normative power.  Everything it does,  including what it aspires to do with Russia, includes a strong normative dimension, explicitly or implicitly. It cannot be avoided. But norms is the one thing where the West and Russia strongly disagree.”

This results in a curious dilemma for the U.S. America needs to pivot and focus on China, which means that American interest in Europe will relatively diminish, a realization that is now dawning on even most liberal internationalists and is reflected on the bipartisan American effort to counter China. That will also mean that like the EU, the U.S. also needs to come to a compromise and negative peace with Russia, an instinct shared in varying degrees by Presidents Obama, Trump, and now Biden. Strategy is about compromise, choices, relative gains, and ugly trade-offs. Unfortunately, Henry Kissinger’s quip about whom to call in Europe still rings true, evident from this latest move to accommodate Russia. Europe it appears is still stuck on that question. And without that elephant addressed, there is not going to be any European strategic sovereignty, or for that matter, an American buck-passing of Euro security to a united Europe.