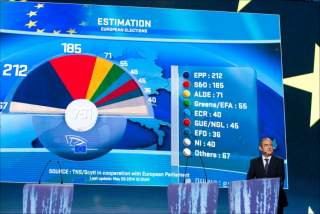 The European Parliament is a powerfully named organization that is a part of the European Union bureaucracy. Its name could trick one into believing that is the European Union’s legislative body, similar to the United States House of Representatives. This is incorrect. It cannot actually initiate legislation. It’s like FIFA, or the IOC, but without actual responsibilities. It also doesn’t feature representatives of the people. There isn’t really a European “people,” and the different peoples of Europe all vote exclusively for candidates presented by their own national parties.

What’s more, very few people actually vote. Turnout in Slovakia was about 13 percent. That’s basically the candidates themselves, a few of their relatives and their closest friends. In the Netherlands, turnout was low enough for the orthodox Christian parties CU and SGP, parties with a devout and loyal base, to receive about 8 percent of the vote, which is higher than the share of Dutchmen who know what a church is. Of course, no one is particularly worried about these low levels of turnout, because we’re not voting on much here.

I pay pretty close attention to these things, but have no real idea as to whether the left or the right currently holds a majority in the European Parliament. I feel that Herman van Rompuy may have something to do with the majority in the Parliament, and the fact that he has the appearance of a low-grade bank clerk would suggest that he is probably a representative of the center-right of some sort. But maybe not: there are a few other presidents of the European Union, such as the former Maoist José Manuel Barroso, who may also be a Christian-Democrat, though his party is the Portuguese Partido Social Democrata.

If no one knows what’s going on in the European Parliament, what do those people who show up to the polls base their votes on? Well, first of all, national politics: all of the countries that voted this past week have their own national conversations, and that’s what drives a lot of people’s choices. It’s a bit as if voters in the United States based their vote in a presidential election on the performance of their mayor, and as if a Democrat victory in a presidential race would put Republican governors under pressure to resign, as they clearly lost their constituents’ confidence. The second and possibly more important “issue” driving the results of European Parliament elections is a fascinating meta-issue: whether the Parliament itself is useful. Some parties, often fairly new, populist ones, do not like the whole idea of the European Union, whereas most of the traditional center-left, centrist and center-right parties do.

The absurd implications of a consensus along a huge chunk of the political spectrum that is not shared by the public were brought home most dramatically in the “debates” held between Jean-Claude Juncker, a former Prime Minister of Luxembourg, a town just outside Belgium, and Martin Schulz, a German national. These two practically unknown politicians are the “leaders” of the Europe-wide alliances of the center-left and the center-right, which means that if their side attains a majority in the Parliament, they could become one of the European Union’s presidents. They also agree on pretty much everything, as they are both fans of the European Union. If you forced a random sample of Europeans to watch their debates, here are a few questions they would likely ask you: Who are these people? Why did they not just convoke a press conference? Were the leaders of the largest parties in the United Kingdom, France and Denmark unavailable? We have already told you we are not radicalized Muslims, why are you doing this to us? The UK Independence Party, the Front National and the Dansk Folkeparti are all deeply euroskeptical, and they would have an actual element of debate to add to this debate.

Anyway, that’s the big issue when ballots are cast: do you like the European Union or not? When D’66, a centrist Dutch party, emerged as the winner of Thursday’s elections (or at least appeared to do so based on exit polls that were the only information the people were deemed worthy of receiving until three days later, when the polls finally closed in other countries), its leader claimed that it was a victory for Europe. That’s because D’66 likes the European Parliament and does not want to get rid of it. You often hear people say that showing up is half the battle; for the European Parliament, being allowed to continue showing up is a sign of great success. Come to think of it: for lots of members of the European Parliament, showing up to collect their per diem is the entire battle.

Now, even though it all barely matters (did anyone even mention the European Parliament during those years of euro crisis we just went through?), let’s have a quick look at what actually came out of this whole process, as we might as well try to glean some info on the continent’s state of mind from the world’s most expensive opinion poll. Here is what the people decided: we do not like the incumbent parties and their blind support for the European technocracy. In Spain, the Partido Popular and the Partido Socialista Obrero Español went from winning about 80 percent of all voters to barely 50 percent. The largest party in the Netherlands received 15 percent of the vote. Tories and Labour combined failed to get half of the British vote. In the core Northern European member countries, these parties were displaced by populist parties of the right like the UK Independence Party. In the southern periphery of Club Med, the shift was toward the extreme left of Izquierda Plural and Podemos in Spain and Syriza in Greece.

How can the European project recover some of the confidence it has lost among the citizens of the European Union? First, stop ignoring referenda or repeating them until they manage to exhaust the voting public. Second, stop inflicting unnecessary pain on the people with your currency union, deflationary policies, and other utopian schemes you may have not revealed yet. Third, if you want to call yourself a parliament, have people vote for more than a tiny subset of its membership and introduce unified continent-wide lists of candidates. That would help voters realize that whether they vote for D’66 or VVD in the Netherlands or the Liberal Democrats in the UK, they’re actually voting for Verhofstadt and his special brand of federalist fervor. Fourth, stop trying to destroy search engines and olive oil dispensers. Fifth, stop creating more presidents for the union. Sixth, have the European Parliament meet in one place. Otherwise, the future of Europe may be that it has none at all.