The European Union Is Bludgeoning Joe Biden on China 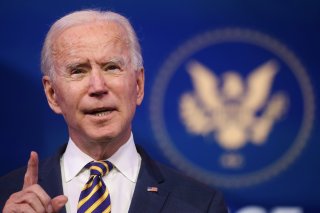 President-elect Joe Biden says that, although he’s hoping for and expects some cooperation from Congressional Republicans once he assumes office, he’s also ready for a “punch in the mouth” from his political opponents.

On Wednesday, though, he faced an at least equally important question about both political pugilism and about his vaunted foreign policy expertise: Has he been ready for a punch in the mouth from America’s allies? Because that’s what he got from the European Union when it announced that it’s reached what it, anyway, considers to be a major investment deal with China.

The agreement matters because Biden’s core claim about America’s China policy lately (in his supposedly post-flagrant coddling phase), has been that President Trump has gotten it all wrong about countering Beijing’s threats to U.S. national security economic interests with an “America First” approach that’s antagonized allies like the Europeans, and that he’d meet the Chinese challenge much more effectively by fostering a united anti-Beijing front with these countries.

The former Vice President—and most of his fellow globalists in the U.S. foreign policy establishment who made the same arguments (e.g., here)—consistently overlooked the gaping holes in this case. Economically speaking both leading European and Asian allies have created and long maintained mutually beneficial trade and investment ties with China. Worse, many of their gains came at America’s expense, since Germany, Japan, and South Korea in particular supplied much of the capital equipment for the export-oriented Chinese manufacturing sector that relied crucially on selling to the United States—not back into their markets. (See here for Asia’s trade with China and the United States and here for Germany’s.)

Since the Trump tariffs on U.S. imports from China were threatening this lucrative arrangement, the allies were bound to be dead set against any American efforts to balance trade flows in particular better.

In terms of national security, these allies have nearly all practiced cynical defense free-riding, skimping on their own defense spending while counting on Washington to ride to their rescue if events went south. A key aim of Mr. Trump’s foreign policy was pushing the allies to act—after decades of globalist enabling—as if their own security mattered at least as much to them as to the United States. But the dogged resistance of most of the Europeans and Asians makes clear their determination to stay on the sidelines militarily, too.

The European Union (EU)’s talks with Beijing on the investment deal represented the first test of the Biden China strategy, and its failure couldn’t be more clear. The negotiations began in early 2014, but progress was modest until China evidently concluded that the end of the Trump era created a golden, costless, risk-less chance to notch a major diplomatic triumph. With a few concessions on protectionist practices that look just as vague and unenforceable as China’s standard pledges of economic good behavior, and promises on human rights abuses and climate change that appear even emptier, the big logjams were broken, and the Europeans wasted no time in seizing the resulting opportunity to curry favor with the Chinese. (See here for a good, short account.)

And the EU’s haste was especially noteworthy because it amounted to an unmistakable rejection of a public Biden team request to consult and coordinate with the incoming administration before it moved forward. Although in response to news of rapid progress on the agreement, Biden’s national security adviser-designate Jake J. Sullivan tweeted on December 21 that “The Biden-Harris administration would welcome early consultations with our European partners on our common concerns about China’s economic practices,” the Europeans steamed ahead anyway.

The Europeans insist that their deal with China simply places their economic ties with the People’s Republic on the same footing as America’s as a result of the “Phase One” trade deal signed by President Trump a year ago. But this position doesn’t pass the laugh test, as there’s no evidence that China has made specific commitments to buy EU products and services, or that the investment deal’s enforcement mechanism is as loophole-free as that secured by Washington. (See this article for a detailed analysis of the Trump agreement.)

There’s no question that U.S. efforts to counter China would be more effective with genuine allied help than without it. But since the allies clearly aren’t on board with this agenda, any further Biden insistence on a multilateral approach would demonstrate that he’s not serious about this goal, either. Fortunately for the United States, for the last four years, it’s had a President who’s realized that the nation’s own devices—and maximizing the national strength and wealth behind them—are by far its best guarantee of satisfactorily advancing and defending its own China-related interests. Unless the allies or Biden change their tacks quickly, expect the next four years to be ones marked by major Chinese gains, and an America that’s considerably less secure and prosperous.