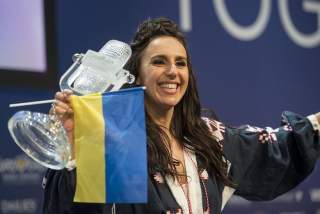 The Eurovision Song Contest isn’t supposed to matter. It’s the vehicle that launched ABBA and Céline Dion to stardom, the realm of ill-conceived, earnest performances that are as divorced from good musical taste as they are from the rest of the real world. Commentators on this year’s inaugural U.S. broadcast (on Logo TV, home to RuPaul’s Drag Race and seemingly little else) variously explained the spectacle as “a rave at the UN,” “the gay Olympics” and “American Idol meets the Hunger Games.”

And yet at the end of Saturday’s final the champion for Ukraine, a Crimean Tatar named Jamala wept before a global audience of two hundred million and reprised her winning song, “1944.” Of her grandmother’s deportation at the hands of Stalin—and perhaps more recent events as well—she starkly sang: “They come to your house / they kill you all / and say, ‘we’re not guilty.’” In a further act of defiance, the song’s refrain is in neither English nor Ukrainian, but in the Tatar minority’s own language.

Other recent winners wrought victory from vague platitudes, catchy hooks and generic rhymes. But Ukraine’s “1944” is somber and hefty by Eurovision standards, having won the trophy though a combination of artistry, grievance and some good old-fashioned geopolitics.

Eurovision has always has an undercurrent of political subtext, with viewers in the forty-six participating countries voting for performers from allied nations, or for the enemies of their enemies; selecting the genuine best song is, at best, an afterthought. And many countries conform to stereotypes: the French are the least likely to submit a song in English, while the Brits tend to be as reluctant in Eurovision as they are in Brussels.

Ukraine’s win was thanks to a change in the voting system, announced back in February. By the old rules, the winner would have been “special guest” Australia, which is notably nowhere near Europe, having first competed a year ago (perhaps it was deemed Eurovision-worthy for giving the world Kylie Minogue). One viewer joked that Europeans should have read their Houellebecq before dejectedly handing their continental honor to a foreign intruder.

As latecomers to a frivolous party, Australians took their loss in stride. But within hours, vociferous reactions emerged from Russia. Members of parliament and representatives of the foreign ministry joked that next year’s Russian submission should be as offensive as possible to the Ukrainian hosts, and dismissed the loss as another shot in “the general demonization of Russia. . . how our athletes are all doping, our planes are violating airspace.” (One solution to this line of criticism, of course, would be to stop athletic doping and military brinkmanship.) Others have insisted that Russia boycott the 2017 contest, while hundreds of thousands of online petitioners, many in the post-Soviet sphere, have requested that Eurovision revise the results.

On the state-owned Rossiya 1 channel’s weekly newsmagazine, Dmitry Kiselyov likened the insidious, anonymous national juries to faceless bureaucrats in Brussels. “Who would have to be chosen for the jury in Serbia, Israel or Armenia, in order for Russia to receive one point from Serbia, zero from Israel and just two from Armenia?” he asked, adding that viewers in those three countries, “as everywhere else, voted in favor of Russia.” He noted that a U.S. broadcaster was carrying the contest for the first time, offering the English idiom, “money talks.” Perhaps the European Broadcasting Union was conspiring against a Russian win, he hinted, ignoring the popular will in a sequined songfest just as the West had disregarded Crimea’s vote to join Russia.

The last time Russia dug in its heels against Eurovision was in 2014, for another singer who won by dint of a combination of talent and identity politics: Austria’s bearded drag queen Conchita Wurst. Putin himself sounded off on Wurst, a character created by a gay man named Tom Neuwirth. Since then, Eurovision to Russia has meant a dissolute festival of post-Christian Western decadence—but nevertheless one that Moscow would do almost anything to win.

Russia’s not the only country where the show went over bafflingly. Despite enforcing a Turkish Eurovision boycott since 2013, when Finland’s performance included a same-sex kiss, Recep Tayyip Erdoğan congratulated Jamala personally by phone, one Turkic national icon to another. And in the United States, a halftime performance by native son Justin Timberlake was omitted for murky legal reasons, in favor of a cringeworthy dance tribute to the refugee crisis that aired during a semifinal round.

For an competition as heated as Eurovision, it makes sense for countries to use it as a tool of soft power, forging a national image or offering a splash of bizarre color on the world stage. But it’s hard to have it both ways, chasing victory at all costs and then decrying the system when it works against you.