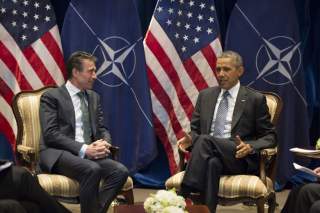 In the run-up to September's NATO summit in Wales, the Obama administration is sending decidedly mixed signals to its European allies, simultaneously demanding that they contribute more to their own security and signaling that they needn't bother.

In a joint press conference in Warsaw with his Polish counterpart last month, President Obama declared that, while America's commitment to Europe was unwavering, "every NATO member has to do its fair share," committing "a proportional amount" of resources to the common security. Defending against future threats is "going to require some joint capabilities that right now we don't have," the president urged, and investing in them is "going to require every NATO member to step up."  He noted that "We have seen a decline steadily in European defense spending generally" and exhorted "that has to change."

The next day, defense secretary Chuck Hagel continued where his boss left off, observing, "I am troubled that many nations appear content for their defense spending to continue declining." "Europe still lives in a dangerous world," Hagel said. "A world where peace must still be underwritten by the credible deterrent of military power."

A couple weeks later, national security advisor Susan Rice chimed in. While "The United States' commitment to the security of our allies is sacrosanct and always backed by the full weight of our military might," she assured, "we expect our partners to shoulder their share of the burden of our collective security." She added, "Collective action doesn't mean the United States puts skin in the game while others stand on the sidelines cheering. Alliances are a two-way street, especially in hard times when alliances matter most." Accordingly, "we expect every ally to pull its full weight through increased investment in defense and upgrading our Alliance for the future. Europe needs to take defense spending seriously and meet NATO's benchmark—at least two percent of GDP—to keep our alliance strong and dynamic."

Alas, none of those statements mentioned consequences if the Germans and others don't step up.

Calls from America for European allies to pull their own weight, pay their fair share, be a security provider rather than a consumer, or at least meet their minimum commitment (once 3 percent of GDP, now 2 percent, and still unmet by the overwhelming number) have been predictably ignored since the 1970s, if not longer. With the end of the Cold War and the Alliance's original raison d'être, the argument has been even more difficult to make. The combination of the global recession, demographic challenges, and public weariness after a decade of fighting in Afghanistan made it impossible, with even stalwart allies like the United Kingdom making drastic cuts in defense spending.

The recent Russian aggression in Ukraine was the latest wake-up call for NATO's oldest allies that they face real security threats. (The newer allies, who came under Moscow's dominance during the Soviet days, ostensibly didn't need the reminder but their spending patterns say otherwise.)  But the administration's actions belied their tough words, making clear that the United States would fill any shortfall from European underinvestment.

In the very same speech where he was exhorting the allies to do their "fair share," Obama was touting the European Reassurance Initiative, an unconditional American investment of "up to $1 billion" to "bolster the security of our NATO allies here in Europe." Presuming Congress approves (no small detail, that), "the United States will pre-position more equipment in Europe. We will be expanding our exercises and training with allies to increase the readiness of our forces." Additionally, the president promised, "We'll increase the number of American personnel—Army and Air Force units—continuously rotating through allied countries in Central and Eastern Europe. And we will be stepping up our partnerships with friends like Ukraine, Moldova and Georgia as they provide for their own defense." All of this was intended to "be a powerful demonstration of America's unshakable commitment to our NATO allies."

Recently, General Philip Breedlove, who commands U.S. and NATO forces in Europe, issued a public plea to stop the drawdown of American troops on the continent and, in fact, "We may need to add additional rotational forces to cover the sustained and persistent presence that we are now envisioning." He added, "For the last 12 to 14 years, we've been looking at Russia as a partner . . . making decisions about force structure, basing investments, etcetera, etcetera, looking to Russia as a partner. Now what we see is a very different situation."

Quite naturally, European politicians facing tough budgetary decisions will see this as an invitation to free ride on the American gravy train. With their publics reassured that United States troops will protect them from an increasingly belligerent Russia, why wouldn't they?

In fairness to the administration, they're speaking to multiple audiences. They're simultaneously trying to signal resolve to Moscow, reassurance to our Eastern and Central European allies and partners while exhorting our richer allies in the West to do more. While they're not mutually exclusive, they're certainly not mutually supporting.

Demands to do something the receiver doesn't want to do—in this case, spend money that could go to social welfare programs or job creation on defense—are useless without an "or else." While senior American officials have been vaguely threatening for years that, if the Europeans didn't pony up for their own defense, the American taxpayer would stop doing it for them, it's long been obvious that the threat is hollow. To be sure, the United States has drawn down most of its huge pre-positioned force from the Cold War days. But there's simply no question that we'll respond rapidly in the event an ally is seriously threatened. So long as the Europeans know that's true, they're unlikely to change their behavior.

James Joyner is an associate professor of strategic studies at the Marine Corps Command and Staff College and a nonresident senior fellow at the Brent Scowcroft Center of International Security at the Atlantic Council. These views are his own. You can follow him on Twitter: @DrJJoyner.