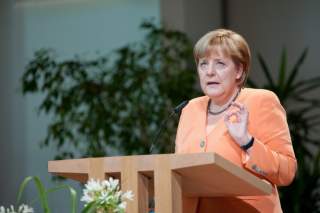 For the first time in twenty years, Europe's borders are closing again. First Austria, then Denmark and now Germany have implemented partial border suspensions of the Schengen principle of free movement. As the Syrian refugee crisis evolves into the European migrant crisis, more closures may be on the way. Europe is disintegrating under the moral pressure of hundreds of thousands of people needing and demanding help.

Horrified by the human suffering and loss of life on Europe's southern and eastern borders, I proffered a realist analysis of the emerging crisis in an August 24 article for The National Interest. In the article, I labeled the European response to the crisis as "sheer madness." Anticipating subsequent events, I concluded that:

Continuing accommodation will yield an exponential growth in migrant numbers (and deaths), a spiraling crisis that will ultimately break the Schengen agreement. The European Union faces a clear choice: open borders without or open borders within. The old liberal dream of both at once cannot survive the harsh reality of our unequal world.

As it happens, on the very day my article appeared in The National Interest, the German government announced that it would accept all refugees from Syria no matter where they first entered the European Union. Under the EU's "Dublin system," refugees are ordinarily expected to claim asylum in the first EU country they reach. Germany "temporarily" suspended this rule.

Germany's unilateral suspension of the Dublin system created a giant sucking sound heard as far away as Syria, Iraq, Pakistan and Afghanistan. German protestations that only Syrians were covered by the blanket offer of accommodation fell on deaf ears. Germany's noble offer to take in 800,000 refugees this year and up to 500,000 in every year to follow was bound to be more loudly trumpeted than its fine-print terms and conditions.

A mere three weeks later, on September 13, Germany announced that it could no longer cope with the influx and attempted to shut the door. "Attempted," because it is a fantasy to believe that a crisis like this can be declared over just when it becomes politically and administratively inconvenient. This may be the end of the beginning, but it is hardly the beginning of the end of the crisis.

After two months of criticizing others for failing to accommodate refugee flows, Germany may soon be tasting its own medicine. In August, Macedonia was vilified by human-rights activists for closing its border with Greece. After thousands of refugees had piled up in makeshift camps, Macedonia finally relented. The farce was repeated on Serbia's border with Macedonia and then on Hungary's border with Serbia.

Hungary's heavy-handed attempts to enforce domestic and EU law were vain in more than one way. Vain, because as long as Germany offered to take all comers who could somehow scramble across Europe to reach its border, Hungary could not possibly hope to contain the flow.

And vain, because Hungary's prime minister, Viktor Orbán, was obviously posturing when he claimed that all refugees who entered the EU through Hungary should stay to seek permanent asylum in Hungary. Hungary's political response to the refugee influx should have been to lay on extra trains and buses bound for Austria and points north.

Austrian chancellor Werner Faymann compared Hungary's harsh impoundment of refugees to the behavior of Nazi Germany, but what will Austria do if tens of thousands of refugees now pile up on its (closed) border with Germany? The government of the Czech Republic is already sending police to its border with Austria to close the backdoor route to Germany via Prague.

In announcing its own border closures, Germany's interior minister Thomas de Maizière said that "Germany is facing up to its responsibilities, but the burden has to be spread in solidarity." All eyes (and ears) now turn to German chancellor Angela Merkel. Will she allow squalid camps of refugees chanting "Germany" to spring up on Germany's southern and eastern borders?

The official German line is that the refugee crisis is a European problem, not the responsibility of any one EU country to solve. But any quota system designed to distribute refugees among EU member states is doomed to fail because no one has consulted the refugees themselves. Will refugees assigned to the Balkans and the Baltics actually go to those countries? If they do go, will they stay? The answers are probably: no and no.

And what about the non-Syrians among the refugees currently overrunning Europe? It is Germany's position that most of them should be returned to their home countries. But how? By force? Germany and the other countries of northern Europe will ultimately accept these asylum seekers or face mass homelessness on their streets. Having traversed two continents to find better lives for themselves and their children, they will not voluntarily go home.

What Germany has created through three weeks of unrestrained idealism is a policy quagmire that may reverberate for generations. Eventually Europe will go the way of Orbán's Hungary and reestablish its external borders—though more likely at the Mediterranean coastline than at Hungary's meaningless border fence. Schengen will survive and those lucky many who made it to Europe in 2015 will remain.

But those who are not granted legal asylum, those who refuse asylum in the countries to which they are assigned, and those who simply slipped in amidst all the commotion will not leave. As a result, Europe will find itself repeating the American experience of undocumented immigrant children needing to be schooled, undocumented immigrant felons who can not be deported and all the other tragedies that result from mass irregular immigration.

Idealism is a wonderful thing, but it must be grounded in realistic models of human behavior. Had Germany offered to airlift refugees from Amman and Beirut to a better future in the heart of Europe, the giant sucking would have pulled people south and east instead of north and west. Just think how much unmitigated good would have come from a German offer to resettle 800,000 Syrian refugees a year by air from Jordan and Lebanon.

Instead, Germany has encouraged yet more dangerous sea crossings, generated mass disorder in poorer EU member states, disrupted the entire continent's rail network, sparked a resurgence of neo-Nazi nationalism and called into question the future of open borders in Europe. Germany's neighbors will not soon forget these three weeks of self-important self-indulgence. Nor, perhaps, will the Germans themselves.