Europe's Migrant Policing Initiative Has Nothing to Do with Migration 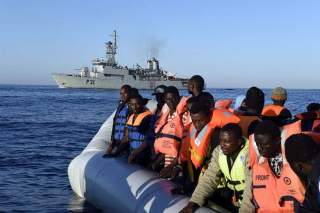 In an act of utter redundancy last month, the UN Security Council passed a resolution approving an EU naval operation that was already underway. The Security Council rubber-stamped Operation Sophia, which was ostensibly devised to stop Mediterranean smugglers. But the operation is unlikely to deter smugglers from continuing their illegal trade, and might actually encourage migration by making it easier for migrants to reach Europe.

Operation Sophia, which was named after a baby born during a migrant rescue mission, aims to disrupt the smugglers’ business model by searching, seizing, diverting and sinking boats used for smuggling, and by arresting and trying smugglers in Italian courts. European navies may board smugglers’ boats and use military force as necessary to capture smugglers. The EU announced the operation last spring, despite warnings by government advisors and a former EU ambassador to Libya that the plan was “moronic and delusional,” that it would result in significant collateral damage to boats that could be confused with smugglers’ crafts, and that it would endanger migrants’ lives.

As it stands, Operation Sophia is unlikely to stop a single smuggler. First, international law prohibits European forces from entering Libyan waters without permission from the Libyan government or the Security Council. This means that European navies must stay at least twelve nautical miles from Libyan shores. A smuggler could easily bring a boat full of migrants to eleven and three-quarters nautical miles from Libya, set its course for international waters, and escape. The migrants could then use a cell phone to call the nearest European naval boat. Smugglers already frequently use the tactic of abandoning their craft, since they do not care much whether migrants actually reach Europe. By the time smugglers jump ship, they have already been paid.

Second, sinking smugglers’ boats will not harm smugglers economically. Smugglers pack hundreds of migrants on dinghies or inflatable lifeboats. Sinking these boats would barely register a loss, and smugglers would simply purchase new ones. Even if Europeans could enter Libyan harbors, smugglers favor fishing boats, which are not designated as smuggling craft until the morning that they are used. Confusion of fishing boats with smuggling boats would also endanger migrants’ lives. Fishermen would be at risk. And smugglers could start tying migrants to deck to ensure that that docked boats would not be destroyed without collateral damage.

Third, political chaos makes Libyan cooperation to stop smugglers nearly impossible. Most smugglers launch from western Libya, which is controlled by militia groups. The internationally recognized government in warring eastern Libya has been reluctant to cooperate with EU attempts to combat smuggling. Indeed, some smugglers provide lucrative income to the very militias vying for power. Even if Libyan cooperation were somehow assured, smugglers could simply move their operations elsewhere. The constant development of new smuggling routes suggests that creative smugglers and migrants will stop at nothing to penetrate Europe.

So why would the EU and Security Council authorize a hopeless operation? The EU may view Operation Sophia as a step toward greater goals. A strategy paper for the operation discussed EU ambitions to send ground troops to Libya to hunt down smugglers. But given endless chaos in Libya, and the fact that the EU and the Security Council both authorized the operation for one year, long-term planning seems foolhardy. More likely, the EU and the Security Council want to seem like they are taking concrete military action in the face of crisis. No one really knows how to stop the migrants, and politicians do not like to appear powerless. Sending a navy to the Mediterranean makes it look like the EU and the UN are doing something. The EU asked for Security Council authorization to legitimize its actions before its domestic constituents—particularly as right-wing parties gain power throughout the continent. If Europeans believe the operation will not work, politicians can point to a higher authority that thinks it will.

Operation Sophia might encourage migrants rather than deterring them. The presence of more European boats in the Mediterranean will increase the probability that migrants will be rescued. Migrants know this, and may be even more likely to take their chances on a death boat. The EU and UN will look like great humanitarians when Operation Sophia saves many of these migrants. But if the EU wants to deter smugglers, it needs another plan.