Europe's Migration Crisis is Anything but over 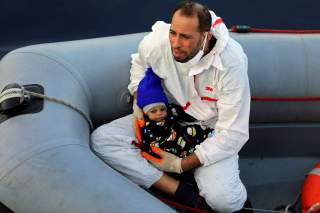 Since the European migration crisis captured the world’s attention in 2015, headlines on the subject have significantly decreased. Many assume Europe is receiving far fewer refugees from the Middle East and North Africa, and that the continent has found a way to settle and integrate those who arrived during the height of the wave. The reality is far more complex.

The EU’s future refugee policy now dominates political agendas. Although overall numbers are down, refugee flows to Europe have not stopped. The continent saw around 171,000 sea arrivals in 2017, compared to over one million in 2015. About 1.2 million refugees that made it to Europe applied for asylum in 2016. This exposed deep fissures in the EU’s current system. It divided the continent on how to handle the refugees who have already arrived, and what to do with the many thousands that will inevitably land on Europe’s shores in the coming years. Europe now needs a strategy that can simultaneously address the legitimate concerns of some EU members but also place refugee well-being at the forefront of decision making.

This is no easy task. In recent months, the EU has been working to reform of Dublin regulation, which stipulates that the country in which the asylum seeker arrives is the country responsible for them. That rule has proven to be difficult for frontline states like Italy and Greece.

The EU has also tried, with little success, to mandate refugee quotas. Central and Eastern European countries such as Poland, Hungary, and the Czech Republic, are concerned about losing social homogeneity and cohesion, and have refused to accept relocated refugees or only taken a very small number. Each of these countries (except Poland) voted against mandatory refugee quotas back in 2015, and according to Dimitris Avramapoulos, the European Commissioner for Migration, are “in breach of their obligations.” The EU is now suing all three for failing to accept their required refugee quotas.

The debate around refugees has also created localized political crises. Germany is a prime example, as Chancellor Angela Merkel pursued a largely “open-door” refugee policy over the last two years. In 2017, Germany processed more asylum claims than all other twenty-seven EU countries combined. The country is now so under-water with asylum applicants that the government proposed a program that would give rejected asylum-seekers three thousand euros as an incentive to accept deportation back to their country of origin if they leave by February 2018. Merkel’s policies sparked heavy antirefugee sentiment throughout the country, leading to the far-right Alternative for Germany (AfD) party securing a seat in the German parliament, the first time a nationalist far-right party has done so since WWII. Refugee policy also resulted in a breakdown of Merkel’s postelection coalition talks last fall.

With these challenges, how does Europe approach refugee policy with compassion for those fleeing conflict, while at the same time addressing push back from around the continent?

Any strategy must start with fighting disinformation propagated by state actors like Russia. Spreading false stories about refugees and stoking antimigrant sentiment is one of Moscow’s primary tools to weaken European cohesion. The EU must counter disinformation so that attitudes toward Europe’s refugee communities are not warped by false stories.

The EU must also work harder to support those who end up staying in Europe long term—Europe needs immigrants to sustain its economy. According to Eurostat, Europe’s population rose in 2016 only because of migration. Eurostat also estimates that without migration, only Ireland, France, Norway and Britain would see rising populations by 2050; Germany and Italy would both see population declines. Many countries are also dealing with a shortage of skilled labor, and the increase in labor force potential “is an opportunity for Europeans to jump-start the continent’s economy,” according to French economist Thomas Piketty. To capitalize on this, the EU could increase programs and better partner with private organizations that help with language and vocational training for refugees. More resources should also be dedicated to turning part time employment into full time, long-term careers.

Still, it would be unwise for the EU to ignore concerns from their citizens about mass migration, or the resistance from refugee-skeptic countries like Poland, Hungary and the Czech Republic. This will only lead to anger by those who feel like they’ve been left behind by the current system. With conflicts in the Middle East showing no signs of abating, far-right parties across Europe will have easy selling points on the threat of migration for the foreseeable future. Listening to fears and addressing concerns openly is the better approach.

Although migration may no longer dominate headlines, it will continue to shape the future of Europe in profound ways. The United States should follow this issue closely. How Europe ultimately shapes its refugee policy will play an important role in the future of the transatlantic relationship for years to come.

Rachel Rizzo is the Research Associate for the Transatlantic Security Program at the Center for a New American Security.

Image: A member of a rescue team carries a migrant baby after being rescued by Libyan coast guards in the Mediterranean Sea off the coast of Libya, January 15, 2018. Picture taken January 15, 2018. REUTERS/Hani Amara TPX IMAGES OF THE DAY