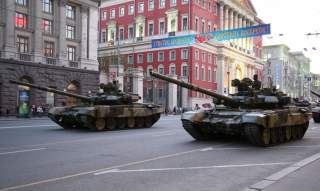 Russia is learning to live in a new harsh environment of U.S.-led economic sanctions and political confrontation with the United States. More than five months after the change of regime in Kiev, which ushered in a new era in Moscow's foreign policy and its international relations, a rough outline of Russia's new security strategy is emerging. It is designed for a long haul and will probably impact the global scene.

The central assumption in that strategy is that Russia is responding to U.S. policies that are meant to box it in and hold it down—and back. The Kremlin absolutely could not ignore the developments in Ukraine, a country of utmost importance to Russia. The armed uprising in Kiev brought to power a coalition of ultranationalists and pro-Western politicians: the worst possible combination Moscow could think of. President Putin saw this as a challenge both to Russia's international position and to its internal order.

Taking up the challenge, however, meant a real and long-term conflict with the United States. Verbal opposition to U.S. global hegemony was not enough. Unlike the 2008 Georgia war, Ukraine was not an episode that could be safely localized and bracketed. Essentially, the current U.S.-Russian struggle is about a new international order.

For the foreseeable future, Ukraine will remain the main battleground of that struggle. Moscow's tactics can change, but its core interests will not. The main goal is to bar Ukraine from NATO, and the U.S. military from Ukraine. Other goals include keeping the Russian cultural identity of Ukraine's south and east, and keeping Crimea Russian. In the very long run, the status of Crimea will be the emblem of the outcome of the competition.

In broader terms, the competition is not so much for Ukraine as for Europe and its direction. Unlike at the start of the Cold War, with its pervasive and overriding fear of communism, the present situation in Ukraine and the wider U.S. conflict with Russia can be divisive. Western Europeans generally still see no threat from Russia; they also depend on Russian energy supplies and on the Russian market for their manufacturing exports.

Russia will seek to salvage as much of its economic relationship with the EU countries as possible, especially to retain some access to European technology and investment. It will also work hard to protect the market for its energy supplies to Europe. In this effort, Moscow will focus on Germany, Italy, France, Spain and a number of smaller countries—from Finland to Austria to Greece—with which Russia has built extensive trading relations.

Ideally, Russia would want to see Europe winning back a measure of strategic independence from the United States. Moscow may hope that the U.S.-led punishment of Russia, coming as it does mainly at the expense of the EU's trade with it, can lead to Transatlantic and intra-EU divisions. Yet, the Russians already feel that for the foreseeable future Europe will follow the United States, even if at a distance. Thus, at least in the short term, Russia will have to count with a more hostile Europe.

Longer-term Russian calculations are linked with the steady emergence of Germany as a twenty-first century great power and Europe's de facto leader. This process, over time, could give the EU the character of a genuine strategic player and make Europe's relations with the United States more equitable. Even though Berlin's and Moscow's interests differ significantly, and a stronger Germany may not necessarily lead to an easy understanding with Russia, Russo-German relations are a rising priority for the Kremlin.

This calculus however, is for the distant future. For the present, Russia is seeking to compensate for the losses in its Western trade and its standing vis-a-vis Europe and the United States through a new outreach to Asia. China's importance to Russia rises, as it is the one major economy impervious to U.S.-initiated sanctions. Concerned at the same time with potentially becoming too dependent on its giant neighbor, Russia will seek to engage others, such as Japan and South Korea, but, like in Europe's case, those countries' relations with Russia will be constrained by their alliances with the United States.

Given the fundamental nature of Russia's conflict with the United States, Moscow is seeking to cement its connections with non-Western countries. The BRICS group, which brings together Brazil, Russia, India, China and South Africa, is a natural platform for that. The recent BRICS summit in Brazil made a first step toward creating common financial institutions. Russia receives some moral support from its partners and is working to improve relations with others in Latin America, Asia, the Middle East and Africa. However, to really strengthen its ties with the non-West, Russia will need to considerably expand economic relations with them: a tall order. India is a key priority here, followed by ASEAN.

Politically, Russia already posits itself as a go-to country for all those unhappy with U.S. global dominance. These countries are watching Russia's confrontation with the United States with keen interest, and are making conclusions for themselves. In particular, they look at what a country like Russia can get away with, and what cost it has to bear for that. Given the very diverse nature of the non-Western world, which Russia has now fully joined, it is not realistic for Moscow to expect too much solidarity from its partners there. Yet, the Russo-Chinese duo at the UN Security Council could become a rallying point for those craving an alternative to Western domination.

The Kremlin understands, of course, that the most serious potential threats to Russian national security come from within the country. In his recent remarks to the national security council, President Putin ranged the Kremlin's priorities in the following order: improving interethnic relations in the vast and very diverse country; strengthening the constitutional order and political stability in Russia; fostering economic and social development, with special attention to the exposed, vulnerable or depressed regions of the Russian Federation. Any serious problem in any of these areas, Putin is convinced, can be used by the United States to undermine Russia's sovereignty and territorial integrity.

This list calls for more government control of the domestic situation, a new economic policy to reindustrialize Russia and reduce its dependence on the West in critical areas, careful reallocation of resources to deal with weaknesses and vulnerabilities, and winning more allies for the government in different groups of society. It also calls for a more nationally conscious elite and patriotic upbringing of the younger generation of Russians. To a degree, the Western pressure aids the Kremlin's efforts.

In terms of military security, the principal threats to Russia, in Putin's view, come from NATO military infrastructure coming closer to Russia (almost a done deal now); from the U.S. ballistic-missile defenses, which are seen as clearly directed at devaluing Russia's nuclear deterrent; and from strategic nonnuclear systems that can attack Russian targets with high precision. This calls for redoubling Russia's own military modernization effort, with an emphasis both on the nuclear forces which should remain a credible deterrent, and on the conventional forces which can be employed in various scenarios on the perimeter of Russian borders and abroad. The United States and NATO are back as likely adversaries.

The competition, skewed and asymmetrical as it may be, is likely to be hard and long. The sanctions will not make Putin back off. He also knows that if he were to step back, pressure on him will only increase. The Russian elite may have to undergo a major transformation, and a personnel turnover, as a result of growing isolation from the West, but the Russian people at large are more likely to grow more patriotic under outside pressure—especially if Putin leans harder on official corruption and bureaucratic arbitrariness. If the Kremlin, however, turns the country into a besieged fortress and introduces mass repression, it will definitely lose.

It is too early to speculate how the contest might end. The stakes are very high. Any serious concession by Putin will lead to him losing power in Russia, which will probably send the country into a major turmoil, and any serious concession by the United States—in terms of accommodating Russia—will mean a palpable reduction of U.S. global influence, with consequences to follow in Asia, the Middle East and elsewhere. Ironically, the challenge to the world's currently predominant power does not come from the present runner-up, but from a former contender, long thought to be virtually defunct. China could not have hoped for such a helping hand.