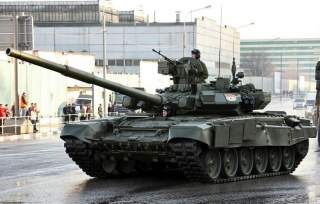 The Minsk II accord is not a peace deal. It is a cease-fire agreement, and a fragile one at that. Beyond suspending large-scale hostilities, pulling back heavy weapons and exchanging prisoners of war, Minsk can hardly be implemented.

Kiev cannot and will not pay for the Donbass’ rehabilitation, and would not talk to the rebel leaders. Economic ties are not being restored, and human contacts are restricted. Reintegrating Donbass into the rest of Ukraine is only acceptable to Kiev if the rebel forces de facto surrender and their administrative structures disappear, allowing Ukraine to resume control over the section of the border that links Donetsk and Lugansk to Russia. Theoretically, this could only be achieved through Kiev’s military victory, or the Kremlin’s political collapse. Neither of these is realistic at this point. The conflict is currently frozen.

Would Russia, for its part, seek a decisive military victory itself, to precipitate Kiev’s political collapse, and mount a spring offensive, within the next few days and weeks? A year ago today, this issue was reportedly debated. The decision then, as we know today, was to limit Moscow’s engagement in supporting the “people’s republics” in Donbass, but avoid a large-scale military intervention in the rest of Ukraine.

Can this decision be revisited, and possibly reversed now? It’s not likely. Not only would an invasion be costly in every conceivable way, but it would be utterly unnecessary. Moscow banks on peace, not war—and for a reason.

With the fighting in Donbass having largely stopped, the focus in Ukraine has shifted back to Kiev. There, the picture is not pretty. The oligarch Igor Kolomoisky wasted no time sending in his militias to take over business assets in the capital, provoking a clash with interior troops loyal to President Petro Poroshenko. Prime Minister Arseniy Yatsenyuk is under fire from his rivals, and former prime minister Yulia Tymoshenko is rising to claim her bit of power in the land. Meanwhile, the Rada, divided not so much along party lines as oligarchical clan interests, is busy discussing the procedures for privatization.

One can argue that the Maidan revolution of 2014 has changed everything except Ukraine’s oligarchical politico-economic system. True, Viktor Yanukovych is gone, but the rest have only become more powerful with his departure. The one-clan-rule regime is finished, but the corrupt oligarchical regime has been restored. To expect that the Ukrainian oligarchs and their political allies or agents will now work for deep economic reform and come together in the name of the country’s national interest means to ignore the entire history of post-Soviet Ukraine. Against this background, the sense of unity in broader society borne out of the unfinished war in the east may not last long.

This could be dangerous in several ways. Ukraine needs major financial support, but its EU and other donors are not feeling overly generous with money, given their various other commitments (such as that to Greece). They are also intensely distrustful of their partners in Kiev, yet unwilling and unable to take charge of such a large country themselves. Miracles sometimes happen, and Sauls may yet turn into Pauls, but gambling on the future of a place like Ukraine is unwise as a policy prescription. A much more active commitment to Ukraine is required; doing nothing can turn out to be much costlier than engaging heavily.

Those in Russia who, despite—or maybe because of—everything that has happened in the last sixteen months, still delude themselves into seeing Ukraine as part and parcel of the Russian world and a candidate for Eurasian economic integration wait for the eventual collapse of the Maidan-installed regime and a new chance for Novorossiya. The problem is that if Ukraine enters a new round of massive instability, it will hardly be a boon to Russia. Rather, it could become a vortex into which Russia and the West, including the United States, will be sucked—with unpredictable and likely dire results.

Hardly anyone in the United States should wish for that. However, Washington needs to be careful. It is normal for military men to remain watchful and always be prepared for the worst, i.e. an enemy attack. It is equally important, however, to make sure that one’s own allies— either out of hubris, like Georgia’s former president Mikheil Saakashvili in 2008, or out of desperation, such as a Ukrainian government fearful of losing control of the country at some point in the future—do not jump the gun, expecting the United States to rush in to defend them. Prime Minister Yatsenyuk has made a habit of saying the Ukrainians are fighting for Western civilization. This time, the miscalculation could have much more serious consequences than what happened in South Ossetia.

In strategic terms, Russia is much closer to Ukraine than is the United States, has much more at stake there and, if push comes to shove, has escalation dominance in the region. The chain of events leading to the 1962 Cuban missile crisis, including the leftist-led revolution against the corrupt U.S.-supported regime of Fulgencio Batista; the new regime’s subsequent affiliation with the communist Soviet Union; the unsuccessful U.S. military intervention on the island where the United States had a military base; and finally, the Soviet move to support the Castro regime by deploying nuclear-tipped missiles in Cuba will not be repeated elsewhere more than half a century later, but it should give us food for thought—and pause. The roles might be reversed, but the risks are comparable.

Above all, what Ukraine needs today is for the West to lean hard on Kiev in support of economic and political reform. Not Mariupol, but a meltdown of Ukraine itself is a clear and present danger that needs to be addressed.