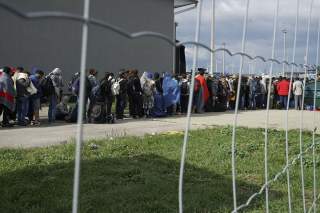 Sincere as humanitarian feelings in Europe no doubt are, the influx of Syrian refugees carries huge threats. The problem is less the refugees themselves than that their arrival exacerbates existing immigrant tensions that already are no stranger to violence. It raises the prospect of still more violence, not just from would-be jihadists but also from other elements in the immigrant community as well as a growing number of resentful European natives, a pattern that will rend Europe's social fabric and detract further from the continent's already limited economic prospects.

Long before the Syrians began arriving, Europe's immigrant Muslim community had grown large and dissatisfied enough to cause considerable social strain. Putting aside the occasional jihadi, feelings of isolation and a distinct lack of economic opportunity had driven people to antisocial behavior. Emblematic are the riots that occurred in the banlieues of Paris in 2005 and all the smaller follow-on riots that have taken place every year since. Back in 2005, French officials tried to pin the discontent on Islamist motives, but it quickly became apparent that the roots were more complex and lay in economic and social grievances, a fact that has only gained reinforcement since. Nor is it just France. Turkish immigrants in Germany, though less violent, have expressed the same resentments, so much so, in fact, that their newspapers have frequently described Chancellor Merkel's efforts at outreach with the word "discrimination." Much of this immigrant leadership has even refused to attend government conferences aimed at calming tension. Similar complaints and the strains to which they lead have emerged among immigrant groups all over Europe, from Scandinavia to Greece.

Resentments are no less severe among Europe's native working population. Though it is popular among the intellectual and media elite to dismiss any native objections as racist, it is unfair to pass over this complex matter so easily. However much racism there is, on both sides, the concerns of these people deserve attention. It is, after all, their villages, not the precincts of the elite, that have radically changed with the growth of immigrant communities. It would deny human nature to imply those involved have no reason to feel alienated and fearful in the face of such change. Europe's high rates of unemployment, especially youth unemployment, have only compounded the problem. It is, after all, hard to be welcoming when in France, some 25 percent of young people are without work, when in Italy almost 45 percent of them are out of work, and almost 50 percent in Spain. On the contrary, this kind of pressure tempts people to blame the newcomers for their plight. As unjust as such feelings may be, they are nonetheless an understandable fact of life, one that has found expression in political and anti-social action.

In the face of these growing strains, Europe's elite has failed. Where immigrant grievances are concerned, it has done little to integrate these people into the economy, much less into the larger culture. On the contrary, existing structures seem designed to keep immigrants isolated and limit their economic opportunities. European schools, for example, have few if any bilingual facilities. The common practice in Europe of designating students as university-bound or not early in their school careers leaves immigrant children with no means to catch up after overcoming early language and cultural disadvantages. Europe has nothing like America's high school equivalency diploma. Officials are only now beginning experiment with affirmative action, and then only on the most limited scale. At the same time, elite complacency has done nothing to address the insecurities of the native population. The absence of labor reform in many of the member states in the EU ensures that high rates of youth unemployment will persist. Instead of receiving reassurance that their national culture will not leave them behind, these people find themselves berated as racist. Against such a lack of official action, indeed almost an active refusal to address anyone's concerns, Europe's elite has managed to intensify feelings of alienation, abandonment and despair on both sides.

It is little wonder, then, that both groups have taken to the streets and that violence has increased. The media has covered immigrants’ actions thoroughly, but the native population has been equally if not more aggressive. Bitter feelings clearly run deep. Long before this latest influx of migrants, surveys in the United Kingdom showed that some three-quarters of the respondents wanted officials to force unemployed immigrants to go home. Surveys on the Continent show similar attitudes. Anti-Muslim websites have proliferated. Feminist journals that typically lean toward the progressive side have expressed serious reservations about growing Muslim influences, and at times have recommended less than liberal means to address them. Attacks on immigrants have also risen. In one shocking incident, Italian neo-Nazis, wearing armbands, ran through the fashionable Pigneto district of Rome, attacking immigrant shopkeepers while shouting "get out foreign bastards." Last year, even before the Syrian influx, several mosques were torched in Sweden, of all places. As early as six years ago, Morten Kjærum, director of the European Union Fundamental Rights Agency, admitted that "crimes with racist motives and discrimination in the EU are more widespread than individual member states admit."

Anti-immigrant votes have risen accordingly. Long before the Syrian influx, one-fifth of Belgium's Flemish votes went to the virulently anti-immigrant Vlaams Belang Party. Denmark has seen its anti-immigrant People's Party gain seats in parliament. A couple of years ago, a Swiss referendum made it easier to expel immigrants. More recently, under the shadow of the Syrian influx, the country gave the anti-immigrant Swiss People's Party the largest number of seats in parliament. The anti-immigrant UK Independence Party did less well than expected in that country's recent general election, but had earlier shocked many with impressive gains in the European Parliament. As other European countries have seen similar turns, it is not surprising that mainstream politicians have begun to trim their sails accordingly. German officials have increasingly emphasized that theirs is not an "immigrant country." Jack Straw, member of the UK Parliament and former foreign secretary, has spoken against the Muslim headscarf. Ireland's Cultural Minister Éamon Ó Cuív, long before the Syrians came, said bluntly that more immigrants would create "a million and one problems," while even earlier, Spain's labor and immigration minister, Celestino Corbacho, openly blamed immigrants for high unemployment.

Into this already-explosive mix are now pouring hundreds of thousands, if not millions, of new Muslim refugees. Sweden reports almost 200,000 new entrants this year, about 2 percent of the population and a quadrupling of recent migration rates. The government admits that its processing system is breaking down. According to the European Union, Germany, its largest country, has seen first-time asylum applications rise 250 percent in just the last year, to an annual rate approaching half a million. Cumulatively, the country has seen the numbers of such applications rise from just over 50,000 in 2011 to almost 700,000. This flow constitutes a 36 percent jump in the country's immigrant population in only four years, with most of the net addition arriving in just the last year. Chancellor Angela Merkel's welcome to the refugees suggests at least a million more will enter the country before too long.

Whatever sincere humanitarian sympathies people may have, it is easy to see how such flows could cause discord even if tensions were not already high. It speaks to this inescapable reality that even as Chancellor Merkel extended her welcome, German officials closed the nation's border to stem the flow. Other member countries, fearing further strains, have defied the European Union's official welcome and resisted flows of refugees in any number of ways. Immigration has risen quickly to the top concern among Europeans. An EU survey conducted every year showed just two years ago that only one European in ten identified immigration as a problem. Unemployment and economic conditions topped the list. By spring 2014, immigration issues had risen in people's minds. One in four saw it as imperative. The spring 2015 survey put immigration down as Europe's top concern by far, overshadowing even questions of unemployment and economic opportunity.

The prospect, then, whatever the humanitarian imperatives, is for more tension and more violence from both sides. Compounding the problem is the fact that the troubles themselves will accelerate the already growing trend for otherwise well-positioned Europeans to emigrate. Even before this latest threat, Germany, the Netherlands, Belgium, Sweden, France and the UK had already seen a net out-migration from their native populations. A large recent survey of German university graduates reveals some of the feelings among these emigrants. Those people linked their decision to leave home not to economics, or even the enlargement of the immigrant community, but rather to what they termed "social decline" generally.

Europe can ill afford such patterns. Its economy is far from robust, and social problems cannot help but retard its progress still more. Because the people who would emigrate to avoid social discord are the same people that would otherwise moderate the tensions between immigrants and a resentful native population, their departure will exacerbate the friction, invite more violence and lead to a further rending of the continent's social fabric, more economic growth impediments and so still more emigration. Because Europe also suffers from aging demographic trends that cannot help but reduce the relative size of its native working population, the emigration of some of its most skilled, energetic people will add yet another weight to the continent's economic burdens, especially since immigrants tend to lack the skills carried away by the emigrants. A vicious cycle seems poised to emerge in which trouble sets in motion reactions that make it worse. Europe effectively faces difficulties that in time will make the ongoing fiscal-financial crisis in Greece and elsewhere in its periphery look manageable by comparison.