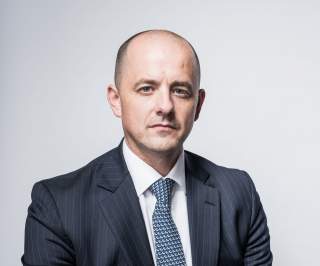 I am running for president because I believe that settling for the lesser of two evils is still evil. Just a few months ago, I was still one of millions of voters who refused to accept the depressing choice between Donald Trump and Hillary Clinton, neither of whom is fit to serve as commander-and-chief. Like all those others, I was waiting for a true leader to stand up and give Americans a better choice. No one did.

As the deadlines for ballot access approached, I said that I would stand up, even if I had no national reputation, no personal fortune, and no party behind me. Now voters in 43 states can cast their votes on my behalf. My name is on the ballot in eleven states and I am eligible as a write-in in the others. Now, in what little time remains before Election Day, I have to let voters know who I am and what I stand for.

The answer to those questions begins with my family, which came to America in search of greater freedom and economic opportunity

My family came to America in search of greater freedom and economic opportunity. On my father’s side, the McMullins left Ireland in the 1600s to settle in what would become Massachusetts. Later they would cross the Great Plains and the Rocky Mountains to seek a better life and the freedom to worship. The story of my family’s search for liberty is the prism through which I see America’s role in the world.

Of course, my family’s story is hardly unique. The same values of liberty and equality that brought my ancestors to America inspire billions—and not just those who immigrate here, but all those around the world who look toward to the United States as an example. Although far from perfect, we are a unique force for good in the world. That is why so many other countries welcome our protection rather than fearing our power.

I know many Americans may question why they should care about events in far-flung corners of the globe. After all, the wars of today are messy and less clear-cut than many conflicts of the past. While I understand this sentiment, I believe America cannot afford to give in to the siren song of isolation. After all, our world today is effectively smaller than it has ever been. Just as the Ebola virus in West Africa made its way to our shores, so too have Islamic radicalism and cyberattacks from states like Russia and China. The reality is that whether or not we ignore the rest of the world, what happens beyond our shores ultimately shapes us here at home.

At the same time, we must exercise leadership in a prudent way. One of the most important mistakes to avoid is the premature use of force. That is why I opposed the invasion of Iraq in 2003. As an intelligence officer who saw it firsthand, I believe the war was a tragic and expensive mistake. I say this even though I remain proud of my service in Iraq as an officer with the CIA. The valor, courage, and integrity displayed by American forces in Iraq were extraordinary. We overthrew a brutal tyrant and then fought a long war to defeat Al Qaeda in Iraq. These were noble objectives but not sufficient justification for the cost of fighting.

The great challenge we face today is how to reconcile the imperative of global leadership with the necessity of reining in its costs. Whereas the war in Iraq illustrates the dangers of doing too much, the myriad failures of the Obama administration demonstrate the costs of retreating into passivity and compromising our principles. If we had struck the Islamic State much earlier, before it spread across Syria and Iraq and before it beheaded American citizens, we could’ve crushed it at a much lower cost. Instead, we now have 5 thousand troops in Iraq while ISIS is launching attacks across Europe and inspiring massacres in the United States.

Given the importance of strength, it is especially regrettable that the Obama administration has begun to implement about $900 billion in defense cuts, leaving our military too old, too small, and not sufficiently ready to meet the demands of a chaotic world. As a first step toward restoring American leadership, I would reverse those cuts so that our troops have the training and equipment they deserve. To lead, America must restore its reputation as a trusted ally and a feared enemy.

The purpose of rebuilding our military is not to fight wars, but to prevent them. George Washington made this point very effectively in his first State of the Union address in 1790. As he said, “To be prepared for war is one of the most effectual means of preserving peace.” Over the past fifteen years, our troops and their families have borne a tremendous burden, for which the entire country is grateful. I am the only candidate who has experienced war firsthand. I have seen the horror and destruction up close, which is why I hate it so much.

As President, there are eight principles I would follow in order to reconcile the demands of leadership with the limits of our power and resources:

1. The president’s personal conduct should exemplify our democratic ideals. The president must demonstrate the honesty and integrity we expect of our leaders while rejecting all forms of bigotry and prejudice.

2. Violating fundamental human rights weakens our country and subverts our leadership. Torture is un-American and so is taking revenge on our enemies’ wives and children.

3. The cost of preparing for war is much less than the cost of fighting one. Our next president must rebuild and modernize the U.S. military; the men and women who risk their lives on our behalf deserve the most advanced technologies and rigorous training available.

4. Strong alliances and partnerships generate security and stability. They deter conflict and reduce the need for the United States to assume the costs and risks of acting alone.

5. Deal with problems before they become full blown crises. An ounce of prevention is worth a pound of cure.

6. Invest in intelligence and diplomacy. These are the early warning systems that help us to understand which problems have the potential to become a crisis.

7. Through peaceful means, promote democracy and human rights. Countries that respect their own citizens are far more likely to become our partners rather than our adversaries.

8. No other country is willing or able to lead decisively on a global scale. We are still the indispensable nation.

These principles embody my solemn pledge to all Americans—but especially our men and women in uniform—that while I will do everything in my power to prevent war, I will also never pretend that inaction is a guarantee of security and peace.

I’m under no illusions at the scale of the challenges before us. My campaign launched on August 8th, giving us just three months until Election Day. I began this campaign with zero name recognition, no fundraising list, and no national party upon which I could call for support. In the weeks since then, my running mate Mindy Finn and I have connected with voters across the country. According to the latest polling, I am now in a dead heat with or beating Donald Trump for the lead in Utah. The enthusiasm there is spilling into the neighboring states of Idaho, Wyoming, and Colorado.

Can I win? If the race narrows, winning just a few states like Utah could prove enough to prevent both Donald Trump and Hillary Clinton from reaching a majority of 270 votes in the Electoral College. From there, the election would go to the House of Representatives. In the House, the delegation from each of the 50 states would get one vote, which it may cast for one of the three top finishers in the Electoral College. In this scenario, both parties would have an incentive to avoid their worst possible outcome—a victory for either Donald Trump or Hillary Clinton. A coalition of pragmatists may decide that supporting a principled independent candidate is wiser than going down to defeat.

Regardless of whether I win, I am running a campaign that is designed to change the political landscape. We have energized a new generation of conservatives who are now standing up for their principles while rejecting racism, sexism, and all other forms of bigotry. We are reaching out across the political spectrum to Americans who refuse to tolerate leaders who act as if they are above the law and above the truth. We are reminding Americans of the importance of enduring alliances and friendships that help us to spread prosperity and freedom.

Our movement has suddenly achieved national prominence, but this is only the beginning. Please join us as we forge a new generation of American leadership.