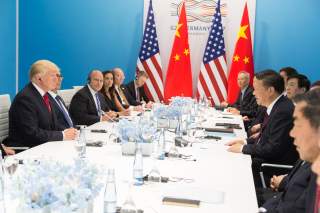 Donald Trump is not a normal president, if there is such a thing. But speaking in Warsaw, he sounds more Reaganite than revisionist. Even in the era of Trump, elite habits make grand strategy hard to change.

As observers recognize, on grand strategic questions Trump’s first months in office were strikingly conventional, in substance if not in style. As a firebrand candidate, he threatened to shred alliances, tolerate nuclear proliferation, end wars “to topple foreign regimes that we know nothing about,” force a radical shift of burdens to other states, give Russia a free hand in its “near abroad,” and talk over burgers with Kim Jong-un. His slogan “America First” suggested a retreat into fortress insularity, withdrawing America from the world. With his abandonment of the “liberal world order,” allegedly he would experiment in retrenchment-based realist or violently insular grand strategy. The hegemon would no longer pay the bill.

Yet as president, Trump increased Obama’s European Reassurance Initiative by 40 percent. He reverted to the “One China” policy, embraced the Gulf monarchies with America’s traditional role as armorer and protector, sent four thousand troops to bolster Afghanistan, maintained sanctions on Russia, vowed to punish North Korea for pursuing a nuclear ICBM, and expanded America’s operations in Syria to target Assad’s forces. His budgetary policies are guided by the Heritage Foundation, not exactly a bastion of Moscow-appeasing isolationism. His chief ministers, to whom he delegates discretion, reaffirm primacy and reassurance at every turn. America still pursues primacy, military preponderance, alliances and counterproliferation, even at the risk of war, in order to forestall the emergence of dangerous challengers and prevent a return to multipolar disorder. America remains the principal security provider in the power centers of the Gulf, East Asia and Europe. On economics, Trump’s iconoclasm looks genuine. Still, for all his erratic style, compared to what observers feared or hoped, the speed of his shift towards orthodoxy on other fronts is impressive.

Trump’s volte-face is not the random shifting of a maverick. If grand strategy is the orchestration of power and commitments over the long haul, Washington remains stubbornly committed to the same decades-old design. It persists, even in adverse conditions. Neither the 9/11 attacks, nor the Iraq war, nor the global financial crisis, nor growing popular fatigue with the up-front costs of primacy, are enough to dislodge its commitment to preeminence. Why?

Explanations that attribute American behavior to the distribution of power fail to explain it. Power is a necessary but insufficient condition. With the shift of wealth from West to East, there is little sign of change. Others are right to emphasize ideas, but they treat grand-strategic choice as a conscious cost-benefit process of evaluation, where states select a strategy from a menu of alternatives. But it is precisely the sterility of debate, among decisionmakers, that accounts for Washington’s behavior. Even in conditions of resource scarcity, disappointing war or growing domestic problems, alternatives hardly get a hearing. Even in institutions charged to review policy, from the National Security Council to the Office of Net Assessment, discussion is managerial: asking not whether but how to remain number one.

Continuity in America’s most fundamental security commitments is rooted in the force of elite habit. Former Obama adviser Ben Rhodes’s notorious profile in the New York Times Magazine points the way: that there is a “Blob” of officials, politicians and experts who “whine incessantly about the collapse of the American security order in Europe and the Middle East.” Rhodes is right. There is indeed a cohesive class that exerts outsized influence. It exerts itself through the “revolving door” between government and think tanks, foundations, universities and corporate boards. Its lamentations about the security order is part of its discourse dominance, with its privileged access to the commentariat. It supplies office holders in government, dominating the pool of experienced talent that makes up officialdom. Trump’s staffing problem points to the wider difficulty: to find experienced and capable officials, he must dip into the reservoir of people who are mostly schooled in the tradition of primacy. To seek officials elsewhere would be to risk hiring the inexperienced. The establishment has close ties to allies, who reproduce the ideology of American primacy and demand Washington’s patronage. The net result is to lock in primacy as the only legitimate and prudent grand strategy, naturalizing it as “leadership.” Alternative strategies based on deep retrenchment—offshore balancing, power sharing or outright withdrawal—are dismissed within government as self-evidently eccentric and foolish. There is vigorous debate about tactics below the grand-strategic level, but within the constraining parameters of tradition. Elites themselves admit the tacit boundaries this places on debate.

America’s grand strategy began in fluid conditions after 1945, when the sudden shift in the balance of power in World War II prompted a vigorous debate within government about what to do with its power. But this is not how the strategy persisted. An establishment formed out of organized advocacy for American internationalist commitments during and after World War II to guide the new superpower. Its preference, for Washington’s benevolent oversight of the international system, become an embedded assumption. Prior choices endured as a matter of “common sense,” even after the original conditions that inspired those choices changed. When the Cold War ended, America had been a superpower for decades. Its pursuit of unrivaled leadership had become second nature.

How might change occur? It requires extraordinary pressure, and a determined regime, a combination strong enough to break tradition and sideline the Blob. Not even Trump, who promised to “drain the swamp” in Washington, has been a determined-enough agent of change. The last truly determined effort was the Nixon-Kissinger ascendancy of 1969–74. Material pressures—Vietnam, the OPEC oil embargo, inflation, an imbalance of payments and racial conflict at home—were eroding America’s supremacy and political will. Nixon was determined to shift Washington towards accepting stable multipolarity, particularly through his opening to Mao’s China and his treatment of the Soviet Union as a permanent partner in a post-hegemonic world order, downplaying nuclear counterproliferation as a priority, and pursuing hard-line realpolitik. To achieve this, Nixon and Kissinger made policy secretly and obstructed oversight, to concentrate power among a small coterie of presidential advisers. This attracted strong opposition and soon unraveled.

Grand-strategic change is therefore rare. People revise habits only when contradictory information is received dramatically and in large batches, and when determined agents realize they cannot assimilate those shocks into their world view. Because of America’s sheer scale and the assumption that it possesses vast latent power, U.S. strategy is especially resilient to shocks. America acquired relative strength unparalleled in history, prophecies of decline proved premature, and this created a logic hard to falsify. It predisposes policymakers to interpret disasters—like the 9/11 attacks—as caused by an insufficiency of American dominance, and as evidence of the need for more. If America is to adopt a more restrained grand strategy, it would need an unusual coming together of severe pressure and a determined reformer. To address the failures of primacy—a $20 trillion debt, escalating rivalry with China and the growing disunion of the republic—new blueprints are not enough. Even if new George Kennans emerged today bearing doctrine, they would struggle to be heard.

Patrick Porter is professor of strategic studies at the University of Exeter. This article draws upon a forthcoming article in International Security.