Ex-Military Brass Line Up Against War in Iran 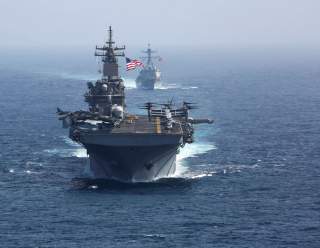 An open letter to the president reads: “A war with Iran, either by choice or miscalculation, would produce dramatic repercussions in an already destabilized Middle East and drag the United States into another armed conflict at immense financial, human, and geopolitical cost.”

These are not the words of Donald Trump’s chorus of opponents on the Hill, or left-columnists in the “opposition” press, but instead members of America’s defense establishment, cautioning against a further build-up against Iran. A twoscore group of retired admirals, generals and ambassadors say, “As President and Commander-in-Chief, you have considerable power at your disposal to immediately reduce the dangerous levels of regional tension.”

The group’s organizer, Rear Adm. Michael E. Smith, U.S. Navy (ret.), told me Tehran could be reasoned with without military confrontation—but only if freelancing hardliners in the administration, most prominently National Security Advisor John Bolton, are put in their place.

If not, the risks for U.S. interests in the region remain considerable. The status quo sees hardliners ascendant on both sides, they contend. Overheated maneuvers out of Washington “have likely reaffirmed the beliefs of Tehran’s hardline elements that compromise with the United States is impossible,” Smith and his colleagues warn.

The president appears to partially agree, reportedly telling his Pentagon chief, Patrick M. Shanahan, that he wants no war with Iran. In Japan over the holiday weekend, President Trump contradicted Ambassador Bolton on not only Iran, but North Korea, where the president has rather relentlessly pursued diplomacy, braving opprobrium from all sides.

Contradictions are not new for this ambitious, but complicated administration. “I don’t want to fight,” the president told Fox News earlier this month. “But you do have situations like Iran, you can’t let them have nuclear weapons — you just can’t let that happen.” The president has repeatedly emphasized that he wants to go back to the negotiating table with Iran and that he only seeks a superior nonproliferation agreement with the Mullahs than the one brokered by his predecessor and political rival, former President Barack Obama. But the list of demands from his lieutenants is more compendious.

Secretary of State Mike Pompeo’s State Department maintains the United States seeks a substantial “change in behavior” from the regime, incorporating deeper criticisms of Obama’s JCPOA—that the nuclear deal let Tehran off the hook for its regional behavior, namely expansive funding of Lebanese Hezbollah and the buttressing of Syrian strongman Bashar al-Assad.

Though he’s occasionally aped hawkish talking points to this effect, the president has more often displayed indifference to regional small ball, shocking many establishmentarians and thrilling core supporters—Iran “can do what they want, frankly” in Syria, President Trump said in January.

Regime change proponents, such as the National Council for the Resistance of Iran (NCRI), associated with the MEK, insist Syria is key to any Iran strategy. NCRI representatives and other hardliners point reporters to regime statements linking success in Syria to the stability of the regime. “Syria is Iran’s 35th province,” said Mehdi Taeb, head of the intelligence wing of the Iranian Revolutionary Guard Corp, recently designated a terrorist organization. “If we lose Syria we won’t be able to hold Tehran.”

And that’s just what others in the president’s orbit want, including his personal attorney, Rudolph Giuliani, who is associated with the MEK. Giuliani told me last year, while emphasizing that he didn’t speak for the administration, that a “change in behavior” policy essentially meant a de facto regime change policy, since the required scale of change to the theocracy would be extraordinary.

Smith and the retired military men argue much of this isn’t working. Perhaps go tougher on Iran than the accommodating Obama, sure: but be careful. Write Smith and company, “While economic sanctions against Iran have had the beneficial effect of reducing financial support for Hezbollah in Lebanon, these, as well as military threats against Iran have thus far proved ineffective in changing the regime’s behavior.”

The question remains: What does President Trump think?