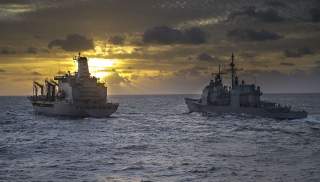 The CSBA study also proposed the construction of a purpose-built class of VLS rearming ship, which would fill a serious hole in the Navy’s logistics force that was left by the early retirement and disposal of its entire destroyer tender fleet in the 1990s, a decision that stands as yet another stark monument to the Navy’s post–Cold War strategic delusion that it would never again face a peer adversary actively contesting American command of the sea.

CNO Richardson’s expression of the Navy’s intention to liberate its surface forces from the shackles of shore-based VLS replenishment have certainly come at an opportune time, and recent moves by Admiral Harry Harris, Commander of U.S. Pacific Command, seem to corroborate that the Navy is indeed working to address this vulnerability and to strengthen combat logistics across the board. In a May 18 unfunded requirements letter reported last week by Breaking Defense, Admiral Harris made three seemingly innocuous and inexpensive requests that largely escaped notice in press coverage but constitute some of the most crucial investments for assuring U.S. and allied viability in potential conflicts in the Western Pacific: $9 million for “airfield damage repair and port damage repair initiatives,” $5 million for “no-notice agile logistics exercises,” and $8 million for “MILCON [military construction] for Dynamic Basing at Palau and Yap.” With the current presence of such large, centralized U.S. and allied bases along the First Island Chain, ensuring the recoverability of shore facilities—so a single attack cannot put them out of action for a strategically significant period of time—is vital to maintaining long-term survivability inside the PLA’s envelope of ballistic missiles and other Anti-Access/Area Denial weaponry. In turn, conducting snap exercises simulating war conditions for mobile logistics units eases dependency on vulnerable fixed installations and affords Western Pacific striking forces far greater flexibility. Lastly, investing in Palau and Yap, two islands that for the past fifteen years have been under Compacts of Free Association with the United States, offers American naval and air forces invaluable strategic depth by laying the groundwork for ad-hoc basing capacity—Holmes’s proposed “improvised weapons depots”—on U.S.-controlled territory along the Second Island Chain, just six hundred miles west of the Philippines.

The Palau Question: Access to Vital Anchorages Threatened by Congress

Palau is home to a large natural anchorage (untenable in bad weather but suitable as a resupply area) in the Kossol Passage that was used by both American and Japanese task forces during the Pacific War.  Yap’s main harbor is much smaller and has a narrow entrance but its calm anchorage can presently accommodate individual ships of destroyer size, where they would be able to reload and conduct repairs in relative safety from the environment and the enemy. Fighters and maritime patrol aircraft based at the 1,800-meter airstrips on both islands would also be able to provide anti-air and antisubmarine coverage for ships replenishing in the vast lagoons of the nearby Ngulu and Ulithi Atolls, which were evaluated as being able to safely moor 300 and 700 ships respectively during the World War II.

With these harbors and airfields less than 1,300 miles, or approximately three days’ steaming time from the likely contested areas along the central part of the First Island Chain, and 1,200 miles from the South China Sea, this area of the Southwest Pacific would be an ideal place for a fleet to rest, refit and reload VLS cells at anchor in relative safety, away from the prying eyes of the People’s Liberation Army. However, Breaking Defense reported last week that the House version of the National Defense Authorization Act has defunded U.S. payments to the Republic of Palau—$17 million per year owed over the coming seven years as part of the Compact of Free Association that gives the United States exclusive military access to the islands. It is to be hoped that more strategically-minded legislators, such as Senators John McCain and Jack Reed, as well as Representatives Rob Wittman, Paul Cook, John Garamendi, Tulsi Gabbard, Martha McSally and Seth Moulton, will be able to convince their colleagues to resolve the Palau question favorably. Those who are perhaps more skeptically inclined toward such outwardly “soft” exercises of American influence abroad should consider their position on the matter in light of the imperative for anchorages in the U.S. Navy’s wartime operational logistics, Palau’s strategic location as a suitable resupply anchorage and airfield close to a potential combat zone, and the unknown variable as to how Palau will reevaluate its relationships with other nearby great powers should Congress choose to all but unilaterally abrogate Palau’s Compact of Free Association with the United States through the deprivation of U.S. payments that represent nearly 6 percent of Palau’s Gross Domestic Product.

“The Substance of Flexibility” and Avoiding the Mistakes of the Past

Rear Admiral Henry E. Eccles, known to some as the “Clausewitz of Logistics,” once said that “the essence of flexibility is in the mind of the commander; the substance of flexibility is in logistics.” Eccles would know this better than most. Before becoming head of the Advance Base Section that planned the myriad of anchorages, airfields, and supply posts that enabled the U.S. Pacific Fleet’s storming advance to the doorstep of Japan in 1943–45, Eccles witnessed firsthand the crippling effects of logistics gone wrong, serving as a forward-deployed destroyer commander during the last campaign the Navy waged to hold back a peer aggressor on the offensive in the Western Pacific. With their fixed bases destroyed and their tenders of inadequate capability and out of position, the ships and submarines of the U.S. Asiatic Fleet found themselves run down, short of torpedoes and ammunition, and severely handicapped fighting a vastly overwhelming foe off the Philippines and the Dutch East Indies in the grim first three months of the Pacific War. Some seventy-five years later, the agony of the Asiatic Fleet continues to hold vital lessons that contemporary planners should keep in mind.

It is of the utmost importance that the U.S. Navy of 2017 not repeat the mistakes of the U.S. Navy of the 1930s by failing to adequately resource and prepare for the strategic logistical challenges of a high-intensity war fought by American ships and planes forward-deployed on the far side of the world. Relearning how to reload vertical launch systems away from established ports and preparing to adaptively base in remote anchorages are essential first steps in this effort, and should be supported—not hindered—by American policy and diplomacy.

Hunter Stires is a student at Columbia University and a researcher at the Center for the National Interest. He is the author of 1941 Asiatic Fleet Offers Strategic Lessons, published in the U.S. Naval Institute Proceedings in August 2016.  He occasionally tweets under the handle @HunterStires.