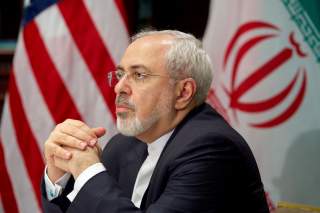 Jacob Heilbrunn, editor of the National Interest, spoke with Mohammad Javad Zarif, Iran’s foreign minister in an interview in New York on Monday, July 17, 2017. The following is a lightly edited transcript.

If it comes to a major violation, or what in the terms of the nuclear deal is called significant nonperformance, then Iran has other options available, including withdrawing from the deal.

Jacob Heilbrunn: Do you want to specify any further what the options might be, or leave it at that?

Mohammad Javad Zarif: I mean, if that’s the option that is open to me—

Jacob Heilbrunn: Do you believe, in looking at Trump the man—is he someone you can do business with, or do you think that he is dangerously intemperate in his dealings with Iran, rhetorically, so far?

Mohammad Javad Zarif: Well, the rhetoric is not conducive to greater understanding, not just with Iran but with other countries as well. We need to be more careful about the signaling, because we’ve seen that wrong signaling in the past few weeks in our region, particularly after the Riyadh summit, has caused a rather serious backlash in the region—not between U.S. allies and Iran, but among U.S. allies. So I believe it would be important to keep that in consideration, to understand the complexities of the situation.

Certainly Iran started an understanding, not just with the United States, but with the P5+1, endorsed by the Security Council, and at this stage we are content with simply implementing that agreement. As we’ve said in the past, we wanted that agreement to be the foundation and not the ceiling. But in order for that to serve as a solid foundation, we want to make sure that the obligations by all sides have been fully and faithfully implemented. And if we get that, then we have an opening to further progress.

Jacob Heilbrunn: The New York Times ran a big story the other day, saying that Iran is the winner, the United States the loser in Iraq. Do you agree?

Mohammad Javad Zarif: We don’t see the situation in our region as a winning or losing battle. It’s a situation where the initial U.S. invasion of Iraq has led everybody to lose. Because we believe that the situation in today’s world is so interconnected that we cannot have winners and losers; we either win together or lose together. Obviously, if an administration or a government or a country defines its interests in terms of exclusion of others, then it is defining the problem in a way that is not amenable to a solution.

I believe our region requires solutions. And those solutions should emanate from a different approach to issues. I believe the article that you’re referring to has not had its facts fully checked. It presents a distorted image—

Mohammad Javad Zarif: —no, it’s not fake news. I don’t like the term “fake news,” but I’m referring to certain passages in that statement, such as a passage that neglects the fact that it was Iraq that used chemical weapons against Iran, and not vice versa. But the article makes that connotation, unfortunately, and it indicates the angle from which the author was approaching this issue.

The same is true with regard to Iran’s controlling Iraq. Nobody can control another country. Even for a superpower to claim to control another country would be a very serious and misleading exaggeration. Iran has rushed to the aid of the Iraqis, not just the Shias, but everybody. For us, the Shias, the Sunnis, the Kurds—all of them are an important segment of Iraqi society with whom we need to have relations. We went to the support of the Kurds: when they had been invaded by ISIS, we were the first to go to Erbil to secure it and to rescue it, basically, from a Daesh occupation.

So that’s the approach that we have. If we have greater influence in Iraq than some of our neighbors or some external countries, it’s because we made the right choices.

Jacob Heilbrunn: Nevertheless, there is still a lot of jockeying going on in the Middle East, and Israel recently bridled at the agreement that the Trump administration had provisionally reached with Russia in Syria. And there’s, of course, the Saudi attempt to blockade Qatar. How do you see the future of Iranian influence in Syria?

Mohammad Javad Zarif: Well, as I’ve said, we have had a consistent policy of fighting extremism and terrorism, whether it was in Afghanistan during the reign of the Taliban, or, even during the time that the United States was in occupation of Iraq, against terrorist elements who were instigating terror inside Iraq. Against terrorist elements and extremist elements today in Iraq. The same applies to Syria. It’s a consistent policy.

You cannot say that about others. You have countries in the region who have consistently supported extremists. The people who recognized the Taliban regime in Afghanistan are the same as the ones who are imposing pressure on Qatar, the same as the ones who are having difficulty with Iran, both in Syria and Iraq and in the region generally. Some countries consistently supported the wrong groups—these are the same countries from whose nationals, almost 94 percent of those engaged in acts of terror, came—so we are talking about a consistent record on their side and a consistent record on the Iranian side.

Jacob Heilbrunn: Final question: when we met the last time, U.S.-Iranian relations seemed to be heading in a somewhat better direction. Do you think if we met again a year from now, is your sense that relations will be better or worse?

Mohammad Javad Zarif: Well, it all depends on the approach that the United States will try, the current administration will try to adopt vis-à-vis Iran. It has to look at Iran as the only country in the region where people stand in line for ten hours to vote. It has to put aside those self-serving assumptions that some members of this administration have repeatedly stated. It has to set aside the assumption that it can create turmoil in the region and draw financial benefits from it.

I believe the financial benefits are short-term, whereas a miscalculated division in the region, as in the one that is happening in the Persian Gulf between apparent U.S. allies, are going to be much more long-lasting, and the repercussions for regional security and for global security will be immense.