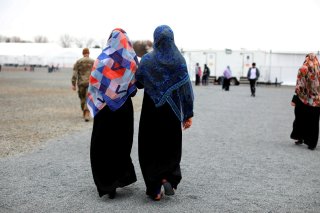 Some Afghan women drastically reinvented their lives after the United States invaded Afghanistan in 2001. They became journalists, thought leaders, business owners, and professors. This summer, many of them had to flee when the Taliban returned to power. Their journey to the United States has placed them in exile and put their dreams in a state of suspended purgatory.

For other women, living in Afghanistan was hardscrabble, and they see the political turmoil of the summer as a bittersweet opportunity for a better life in America. How Afghan women view their status as refugees in America is primarily defined by how they saw themselves as Afghans back home.

This summer marked the end of twenty years of the United States’ war in Afghanistan. But living in exile as refugees and immigrants has once again become the defining experience of many Afghans’ lives. Desperate Afghans clinging to the side of a moving military plane and ​​the chaotic scenes at the Kabul airport are unforgettable moments for the many Afghans who have fled. Women who were celebrated in the West as the true beneficiaries of the invasion are now condemned to live in fear after the fall of Kabul. Hundreds of degrees, certificates, pictures, and any other documents that could label them as independent, free-thinking human beings were destroyed, burnt, or buried in the first weeks of the Taliban takeover.

August 2021 witnessed an exodus of Afghan women seeking refuge in Afghanistan’s neighboring countries and as well as far-flung countries around the world, heartbreaking social media posts of women describing their experiences in Farsi and English, and stories of fear and despair in the headlines of international newspapers. For some women, it was the first time they left their country of birth. Others were leaving their country again, having already reclaimed their home after a first exile.

For those who previously experienced the harshness of refugee life in Iran, terrible memories flooded back into their minds. The horrendous sound of insults like “Afghani-e-Kesafat (“Dirty Afghan”) whispered into their ears as they awaited a rescue flight at the Kabul airport. Afghan social media, which was once full of hopeful messages and success stories, now descended into desperate pleas. Despair, as if a code for their collective experience, is the feeling that Afghan women share regardless of their position and status in the country.

Now in exile, some Afghan women struggle to accept that the progress they contributed to came crashing down so quickly. They start their days by reading stories about new atrocities, new waves of women fleeing the country, and new signs of despair. Yet, some live with the hollow hope that they will one day return to a liberated motherland. Some others post smiling selfies after landing in a safe haven abroad. And many look toward a new life in the United States while carrying the memories of the past and the painful image of their homeland.

Anisa Shaheed, a prominent journalist with TOLO news, a widely watched and independent television network in Afghanistan, arrived in Suwanee, Georgia a week after the fall of Kabul. A headstrong believer in the freedom of the press, Anisa helped develop Afghanistan’s young democracy during her twelve years of reporting in the field. She covered stories of political violence, war atrocities, political division, human rights violations, and elections. “My job was dangerous both as a journalist and a woman in the field. But it was my choice to be in the field rather than in the corner of a news studio,” said Anisa. “I would rather leave if I cannot be a free journalist.” “The next day, after Kabul fell to the Taliban, I went to work,” she continued. “It was not finished for me.”

When the Taliban took over Kabul in the 1990s, Anisa’s family returned to their home province of Panjsheer. Throughout her childhood, Anisa dreamed of the day that schools would re-open and she would be free to return. Anisa’s family moved back to Kabul, where she later attended the School of Journalism at Kabul University. “My father wanted me to become a teacher because it was not safe for a woman to be a journalist in Kabul,” recalled Anisa.

After graduating, Anisa joined TOLO news and documented the realities of Afghans’ lives in the era of the war on terror. “I have seen pieces of human bodies, the blood of innocent Afghans, men’s shoulders sulking in despair, and distraught faces of mothers in front of the emergency hospital,” said Anisa. “That is how your life is when you are a journalist in a war-torn country.”

Despite the difficult feelings she was dealing with nearly every week, Anisa still dreamed that someday she would travel across Afghanistan and write stories about Afghanistan’s development, the new generation’s aspirations, and peace.

“My job was burdensome,” said Anisa. “But I witnessed peoples’ belief in the media and sharing the truth. I have never been tired of what I was doing as a journalist. I observed other journalists being killed one after another. That could not stop me. But, when I realized I could not perform my job as a journalist anymore, I decided to leave the country.”

Anisa lived in a refugee camp in Virginia before she moved to Georgia where she is now hosted by an Afghan friend. “I appreciate the freedom here in the United States, but I only wish I could enjoy it in Kabul,” Anisa said. “The United States is beautiful, but I cannot ignore the fact that I lost my home and the job which would define my life. It is painful to see foreign news provide reports of the events in Afghanistan, but I am just sitting here not able to do the same.”

Female foreign journalists, like Yalda Hakim from the BBC, are freely traveling to Afghanistan and reporting on Afghans’ lives under the Taliban’s rule. Well-trained Afghan female journalists, however, are in exile and confronted with an uncertain fate. Some have to start from scratch as they mourn the loss of Kabul. Anisa now takes English courses at Suwanee Community College, and when she finishes her school work, she writes reports based on conversations with her family members who are still in Afghanistan.

Born and raised in Faizabad, Badakshan, Atia Mehraban is a young civil activist who realized that she could be bolder, louder, and freer to voice her opinions with a diverse audience by moving to Kabul, once a haven for activists and changemakers. “Faizabad is and will remain my home city. But I needed better freedom for my activism,” said Atia. “I wanted my voice to reach more diverse audiences.”

“I joined the Afghanistan Independent Human Rights Commission (AIHRC) to help Afghans enjoy their civil rights,” said Atia. As a Tajik woman, Atia witnessed severe discrimination on the basis of gender and ethnicity in the country, particularly in the government. “That discrimination has never let us build a nation,” Atia added.

“I had never thought that Kabul would fall even when I was hearing major cities were falling,” said Atia. “Neither did I imagine I would leave my country someday.” The day after the fall of Kabul, Atia and her four younger sisters decided to go to a coffee shop, where they usually gathered with their friends, to show the Taliban that women will uphold a twenty-first-century lifestyle without fear. “The coffee shop was empty. We went to Pol-e-Sorkh, which was one the most crowded areas of Kabul city just a day ago,” she continued. “Two days later, I went to the same coffee shop, a place run by a woman. It was now a place people were selling their second-hand items.” People were selling what they have to support their passage out of the country.

“I wish I would never go there and would never find the place where I spent my happiest times in such a despicable state. Two days later, I left Afghanistan forever.”

Atia now lives in a hotel in Virginia. Sometimes she hosts conversations about the ongoing events in Afghanistan, such as violation of women’s rights, humanitarian crisis, and the Taliban’s atrocities against Afghans in Twitter space among Afghans. “I am still engaged with activism. I work on some projects with my friends to help Afghans inside the country,” she said.  “It does not feel the same. But I am happy I can do it freely and fearlessly here in the United States.”

In her free time, Atia meets friends she met in Kabul and some of her former classmates. She does not know how her future in this new society will look, but she appreciates the freedom she is guaranteed for her activism.

Fahima Hakimi worked as an administrator for the United States Institute of Peace in Herat, Afghanistan, and arrived in Virginia on August 26, 2021, where she reunited with her older sister for the first time in four years. “I was excited to see my sister, and as I was stepping out of the plane, I could imagine her happily waiting for me at the airport gate,” Fahima said.