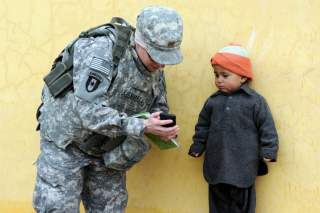 On June 4, India’s Narendra Modi traveled to the Afghan city of Herat to join Ashraf Ghani in inaugurating the Salma Dam, renamed the India-Afghanistan Friendship Dam for the occasion. The dam, a multi-decade project funded by India, provides two things that are urgently needed by millions of Afghans every day: water and electricity.

Social media, for once without the usual cynicism, celebrated the event as a genuine step forward for the still impoverished, still struggling Afghanistan. To us in the United States, the Salma Dam can serve as a forty-five-megawatt, seventy-five-thousand-irrigated-hectare object lesson for how far we have drifted in the wrong direction, in our understanding of development aid and, yes, of friendship. We used to build dams, too—in Afghanistan, for that matter. Now we’re trying to build democracies and educate others about human rights, women’s equality, freedom of the press . . . We’ve become the exporter of intangibles—no, not even that. We’ve become the exhorter of intangibles. Do this. Don’t do that. Do it this way.

Consider the new favorite of U.S. development aid: the workshop. Not an actual workshop teaching something real, like carpentry or farming, these are California-ish feel-good sessions in which women, mostly, and generally the same ones over and over again—the ones who speak good English and have the savvy to get themselves on the invitee list (which is then recycled endlessly because that’s so much easier than looking for new candidates)—are informed by their “trainers” that they are equal, important and born to be leaders, whereupon they practice writing their “visions for the future” on a whiteboard and giving fictitious radio interviews, two skills that are clearly essential for oppressed women in traditional societies in post-conflict situations. The graduates go on to a “train the trainer” course, and if they play their cards right, to the advanced class and the refresher workshop and the specialized class on how to run for office. It can become something like a profession, with free meals, a stipend, days spent in nice hotels and for the especially lucky, conferences in Dubai or Europe or even the United States. USAID runs a $416 million program called Promote, intended to bolster the self-esteem of Afghan women and “empower” them to be leaders.

Afghanistan’s first lady, a generally tactful, polite and very diplomatic person, is not a fan. She warned with unusual directness that

“I do hope we are not going to fall again into the game of contracting and sub-contracting and the routine of workshops and training sessions generating a lot of certificates on paper and little else.”

The U.S. government’s own Inspector General for Afghan Reconstruction (SIGAR), upon reviewing the program, was even more direct, expressing the concern that “the Afghan women engaged in the program may be left without any tangible benefit upon completion”—which also translates into the American taxpayer having squandered those hundreds of millions of dollars.

No attention has been paid to these warnings, and indeed it would be difficult to change course: an entire apparatus replete with departments, bureaus, officials, career paths and, of course, massive and major vested interests has grown up around this currently fashionable approach.

The “game of contracting and sub-contracting” mentioned by the first lady was also what brought ruin to our more conventional development aid in the first place. Under this ill-advised process, a very large sum of money is allotted for a particular project—let’s say, health clinics in rural areas. The money is given to a major contractor, who in turn has spent vast amounts of effort and money building relationships with the U.S. government agencies dispensing these goodies, and has hired a staff of grant writers who know the respective agencies and the lingo they prefer, often because they themselves were employed there in the past. Upon winning the bid the lead contractor, known as the “prime,” takes a hefty slice and then immediately farms the project out to one or more subcontractors, who take their share and hand it off in turn. Along the way an expensive Kabul office is rented, SUVs purchased, security guards hired and a domino process of further subcontracting is launched, at the conclusion of which a few Afghan or Pakistani workers hired by a local ramshackle business are sent out with spades, hammers and the negligible remains of a once huge budget to slap something together. It doesn’t matter, because due to security regulations, the USAID officer in charge is not allowed to visit the site, will never come anywhere near the project and can safely be told—this happens all the time—that the clinic has been completed, when in truth the only thing in place is a slab of cracked concrete out somewhere in the desert, possibly slanted into the dirt to approximate the mandated handicap ramp. The intrepid SIGAR, which actually goes out into the field, found that many clinics were ten kilometers or more from their designated location, that many had no running water or electricity, and had cracked walls, mold and other basic construction issues.

The problem of absent quality control has plagued U.S. infrastructure projects in Afghanistan from the start. The Kabul-to-Kandahar road, due to the multiplicity of subcontracting agencies with no one actually accountable, initially omitted the many bridges and overpasses along the way, which meant that cars and trucks had to veer off the paved road and chart their own course across unpaved terrain several times during the journey—as I can personally attest from my own road journey in 2003, shortly after the road’s inauguration. Indifferent oversight also meant that the road began degrading after just two years. In sum, $4 billion so far has gone into the massive U.S.-led road-building project in Afghanistan. Shoddy workmanship, compounded by heavy trucking traffic and the occasional roadside bomb, have made most of these roads into high-fatality, accident-riddled death traps, with pieces of unsecured pavement sliding away and crater-sized holes appearing suddenly to swallow up the unsuspecting taxi. The U.S. government has since come to the revolutionary insight that building roads without a maintenance plan and without solid quality control is pointless, but that doesn’t mean we’re going to stop, or change the system: there are still contracts that were previously awarded and they are going forward, indeed, with increased budgets. Due to declining security, road building now costs $5 million a kilometer, for work that will barely outlast its ribbon cutting.

SIGAR, the government office tasked with overseeing Afghan reconstruction projects, God bless it, has been bleating its little heart out for years in a completely futile, utterly ignored effort to make someone—anyone—listen. They have warned of waste, of multiple millions of dollars simply unaccounted for, of the fact that the responsible USAID officials are not only failing to provide oversight, but can’t even reliably tell you where the projects that they have never visited, and are attempting to keep track of through geospatial monitoring and photographs, are hypothetically located. They have numbers, they have names, they have concrete evidence, they’ve actually been on the ground, but no one listens. They have found several of the largest mega-contractors guilty of mismanagement, even outright fraud, but after a slap on the wrist, those same companies are granted the next mega-contract.

Roads having fallen out of favor, the watchword of the day is the “workshop”—unsurprisingly. How much easier to bring twenty women into the ballroom of the Serena Hotel and have them practice speaking assertively into a microphone for three days. How much more convenient to assemble some random women, appoint them as “voices” against violence, and have them pledge to go home and tell their sons not to join the Taliban. The metrics? No problem. These women know which side their naan is buttered on, and your concluding feedback questionnaire will be effusive. This has changed my life and I will now go forth and liberate all the other women of Afghanistan. While also ending the insurgency by speaking sternly with my son. Thank you, America.

Rather than go on playing this expensive, useless game, why not just do nothing at all? Or why not partner with a country that knows this kind of setting, understands this sort of population and its needs, and can operate here—India, for example? A country like that understands “empowerment” can require different things in different contexts.

When you are highly advanced and living in peacetime, and your switch turns on the lights, you can define “empowerment” as meaning that women should speak up more loudly in the next board meeting. But when you are trying to dig out from under forty years of war, and when you were one of the poorest and least developed countries in the world even before that, “empowerment” might mean just that: a dam that brings you actual kilowatts of actual power.

And I hypothesize this: when they irrigate their fields with the resulting water, or take their child to a clinic and there are lights on and water is coming out of the tap, the Afghan beneficiaries in their thousands will think: democratic India, right next door to us, is really something! Maybe we should go that route, too . . . .