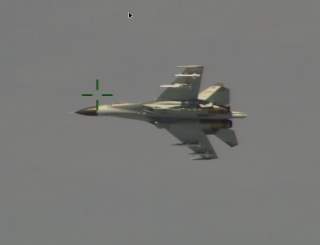 The latest series of mid-air confrontation between Chinese fighter jets and American naval reconnaissance planes over the South China Sea has raised worries that the cat-and-mouse game being played between the U.S. and Chinese militaries could end up in a catastrophic collision and spark a crisis in bilateral relations. In one such incident (which occurred on August 19), a Chinese jet fighter deliberately cut in front of a U.S. Navy P-8 Poseidon, which was flying in international airspace 135 miles east of China’s Hainan Island. In one of the most dangerous maneuvers performed by the Chinese pilot, the Chinese jet came within thirty feet of the U.S. plane.

To the Pentagon, these incidents are particularly unsettling because in April 2001, a Chinese jet performing similarly dangerous maneuvers lost control and collided with a U.S. reconnaissance plane near Hainan Island. The Chinese pilot lost his life and the severely damaged U.S. plane made an emergency landing on Hainan. The resulting standoff triggered one of the worst crises in U.S.-Chinese relations in the post–Cold War era.

The Pentagon has publicly blamed rogue pilots of the Chinese air force for these midair confrontations. While it is hard to ascertain whether the People’s Liberation Army Air Force (PLAAF) has authorized such dangerous tactics, one can speculate, with reasonable confidence, that the theory of rogue pilots leaves many questions unanswered.

In the aftermath of previous incidents in which the PLA’s actions were responsible for causing trouble in U.S.-Chinese relations, such as the testing of an antisatellite weapon in 2007, the rollout of a stealth jet fighter during the visit of Defense Secretary Robert Gates in 2011, and the 2001 collision over Hainan, the theory of “rouge” military commanders allowed us to conveniently explain away the underlying competitive tensions between China and the United States. The trouble with this theory is that when such ostensibly “rouge” behavior constitutes a pattern, we need to look harder for an alternative explanation.

In the particular case of China’s response to routine American reconnaissance flights along Chinese coasts (roughly 500 a year), the truth is hiding in plain sight. Chinese civilian leaders and military commanders alike regard these flights as illegitimate and hostile. For the United States, such flights are not only legal under existing international law, but also legitimate and essential in ensuring that it keeps track of China’s latest advances in military technology and capabilities. The reconnaissance flights along Hainan, in particular, are considered critical missions because China has built a base there for its newest strategic nuclear-missile submarines (the Type 094).

Needless to say, the U.S. and Chinese perspectives on the legitimacy of such flights are in complete conflict. What is remarkable is that despite such clashing perspectives, China has not responded with overly aggressive countermeasures, except for the tragic collision in 2001, until now. A plausible and more nuanced explanation is that the PLAAF is faithfully executing the orders of the civilian leadership, but the incentive structure inside the Chinese military rewards tactical aggressiveness, rather than restraint.

Top Chinese civilian leadership—in this case, President Xi Jinping, who is the commander-in-chief of the PLA—must have directed the Chinese military to find a way to respond to American reconnaissance flights. In all likelihood, such directives are issued in general terms. The problem lies with the interpretation of the intent of the top leadership and the determination of the tactics to be used in executing the orders. Unfortunately, the mindset in the Chinese bureaucracy, including the PLA, favors an aggressive interpretation of the intent of the top leadership. Typically, lower-level officials tend to err on the side of excess, rather than caution, because excess in execution is sure to raise their profile and gain the attention of their superiors. By demonstrating their loyalty and capability, the more aggressive lower-officials outshine their more cautious colleagues. Even more unfortunately, this incentive mechanism operates vertically throughout the Chinese bureaucratic system and results in progressive amplification of excess.

In domestic affairs, this mindset is responsible for catastrophic policy mistakes and human suffering (the worst historical example is the Great Leap Forward famine; the more recent example was the crackdown on Falungong, a spiritual group). In foreign affairs, the same mindset has created numerous diplomatic crises.

So in a strict sense, the hair-raising interceptions by Chinese fighter jets are unlikely to be rogue operations. The authorization to conduct such operations to disrupt, if not deter, American reconnaissance flights along Chinese coasts is certain to have come from the top. However, the tactics involved in these operations are determined by lower-level commanders. Given the adverse incentive structure in the Chinese bureaucracy, we can safely speculate that these commanders are inclined toward more aggressive tactics. We can be certain that the PLAAF pilots, known for their faithful execution of orders, are not the rogues the Pentagon would like us to believe.

The logic behind such analysis is actually testable. If this theory is correct, we are going to see the continuation of such interceptions as routine manifestations of the U.S.-Chinese strategic competition. The tactics may change, but they will always reflect the overall intent of the top leadership.

Minxin Pei is a professor of government at Claremont McKenna College and a non-resident senior fellow of the German Marshall Fund of the United States.