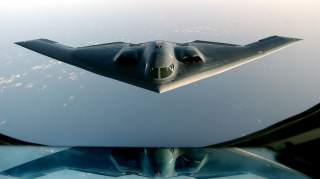 We are a few days away from the latest deadline in the Iran-U.S. nuclear talks. Much of the case on whether we need a deal depends on this question: what does the Middle East look like if Tehran and Washington don’t come to an accord? Is war between the United States and Iran inevitable? If U.S. hawks succeed in scuttling a nuclear deal, then those same hawks will shift, in short order, to insisting on war as the only remedy.

Iran has certainly strengthened its hand over the past two years. The ISIS offensive into Iraq has demonstrated that the Baghdad government cannot manage its own internal security without the assistance of both Washington and Tehran. There is no plausible future in which Iraq can act as a counter-balance to Iran, or even prevent Iranian infiltration into the country. Indeed, Iraq has required military assistance from both the United States and Iran merely to stop the ISIS offensive. In Syria, Iran has established itself as critical to the survival of the Assad regime, even as the government’s ability to manage its own territory has declined.

Elsewhere, the Gulf States have gone on a buying binge, massively expanding their air and naval capabilities. Saudi Arabia purchases more arms in a year than Tehran’s entire defense budget.  This buildup has come, in large part, because of the vacuum left by Saddam Hussein, and by the withdrawal of the United States from Iraq. On the one hand, this suggests that the Gulf monarchies have committed to developing capabilities that can deter Iran. On the other, it means that they remain desperately concerned about the growth of Iranian power.

Together, these factors mean that a war against Iran would not lack for regional cheerleaders.

If the deal fails, hawks in the United States, Israel, and Saudi Arabia will call for more aggressive action against Iran.  Part of this could involve sanctions, but given how tight the sanctions regime has become, how difficult it will be to hold that regime together, and how critical the existence of ongoing talks have been to the sanction’s maintenance, it’s hardly implausible to suggest that Iran will soon escape its “box.”

There is little question that a committed U.S. attack could devastate the Iranian nuclear program (although probably not destroy it), and cause significant damage to the rest of the Iranian economy. The attack (worked out in some detail in a 2012 report by the Center for Strategic and International Studies) would involve long range bombers, drones, electronic warfare, land-based fighter bombers, carrier aircraft, and submarine launched cruise missiles.

The Iranian air defense network, reasonably sophisticated for a 1970s-era system, cannot plausibly deter or defeat a U.S. attack. Such an attack would likely open with a wide assault against Iranian air defenses, including radars, SAM sites, and airfields. In the name of force protection, the U.S. Air Force and the U.S. Navy would take the opportunity to cause permanent damage to the Iranian military.

Depending on the scope of the attack, the U.S. military might also strike Iranian naval targets. The Iranian navy and the maritime component of the Revolutionary Guard pose a potential threat to U.S. naval vessels, although how plausible this threat would be in the case of an actual attack (when the U.S. Navy is taking active force protection measures) is up for debate. U.S. air and naval forces could also strike shore based cruise and ballistic missile emplacements, with limited returns.

The biggest choice the United States would have if it decided to attack Iran would be whether to include a wide range of economic and “regime” targets along with sites specifically associated with the nuclear program. A well-constructed U.S. strategy would allow some space for Iranian counterattack and escalation. This would allow Tehran to save a measure of face, while hopefully deterring full commitment of its resources, which could have dreadful effects for the region as a whole. A poorly constructed U.S. strategy would focus on “regime change” in the hopes that the airpower alone could topple the Tehran government.  While such a strategy might win the hearts of the least realistic analysts in Washington, the historical record has not been kind to air power's capacity to facilitate the overthrow of governments.

Iranian response on the ground

There is no question that Iran will respond to a U.S. attack, probably in ways that America’s Middle East cheerleaders (primarily in the Gulf States) won’t expect or appreciate.

Iran has a vast array of short range ballistic missiles and land attack cruise missiles.  While analysis of these missiles has focused on their potential threat to American naval vessels, they could pose a much more serious problems for ground installations around the Gulf, including both military and economic targets. Attacks on oil installations could have a wide effect on global oil prices, although the global economy is certainly better suited to weathering price shocks now than five or ten years ago. Of course, the Iranians surely appreciate that missiles, once fired, cannot be launched again, and that any such attacks run the risk of incurring escalation from the United States.  Iran can also attempt to close the Straits of Hormuz through mining, small boat, and missile attacks, although any serious effort in this regard would expose Iranian military forces to near total attrition.

Iran’s political options are more intriguing than its strictly kinetic tools. When the United States removed the Baathist regime in Iraq, it effectively conceded Iranian influence on the country. Tehran will undoubtedly step up its efforts to destabilize both Iran and Afghanistan. Iran is unlikely to begin supporting ISIS, but it can certainly curtail the cooperation we’ve seen over the past months. It remains well within Iranian capabilities to increase support for Iraqi Shiite militias, as well as for the Assad regime.

The broader political environment will also shift against the United States. U.S. relations with Russia have gone sufficiently south, and the U.S. attack against Iran itself would be sufficiently destabilizing, that we can almost surely expect Russia to militarily support Iran in the form of aircraft and air defense systems. These systems would, in the medium and long term, make Iranian defenses considerably more lethal, and its nuclear program far more robust. Moreover, if Russia opens up the Iranian defense market, we can expect China to follow. The sanctions regime cannot survive a U.S. attack on Iran.

Almost no one believes that airstrikes can either permanently destroy the nuclear capacity of the Islamic Republic, or bring the Tehran regime down. Arguments in favor of a strike sometimes touch on the possibility of undermining the government, but these amount to flourishes, beats that an author has to hit on his or her way to making the core argument. And the core argument is this: the United States should regard itself on more or less permanent war footing with the Islamic Republic, and should expect to regularly use air and sea power in order to curtail Tehran’s ambitions.

If the United States launches a major strike on Iran, it can expect to launch another strike in a few years, and another strike a few years later. Each time, Iran will improve the security of its nuclear facilities, and each time, it will build sympathy within the international community. Washington will earn a reputation for bellicosity that will make Beijing and Moscow look like rank amateurs.

Attacking Iran is a terrible idea, but the sheer terribleness of it won’t prevent it from happening.  Even the effort to put together a deal has helped drive momentum for doing something, anything, about the Iranian program. If the deal fails, voices in Israel, the United States, and the Gulf will demand more forceful action. The United States has the capability to inflict grievous damage on the Islamic Republic, but cannot solve the problem of Iran by bombing alone.