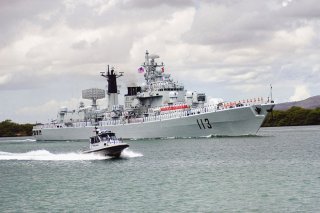 Over the last decade, the People’s Liberation Army Navy (PLAN) has increased the frequency, duration, distance from the mainland, and complexity of its operations.

Not only does China now maintain a permanent counter-piracy escort flotilla in the Indian Ocean, it also routinely conducts naval exercises and operations beyond the First Island Chain, which stretches from the Kurile Islands near Russia through Japan, the Ryukyu Archipelago, Taiwan, and the Philippines to Borneo Island. These changes illustrate growing PLAN capabilities and raise the prospect of changes in Chinese maritime strategy and an expanded PLAN geographic role.

PLAN deployments to and exercises in the “near seas” (the Bohai Gulf, the Yellow Sea, the East China Sea, the Taiwan Strait, and the South China Sea) since 2004 are evolutionary steps toward implementing China’s current near sea active defense strategy. However, regular deployments deeper into the Western Pacific have also helped the PLAN build the ability to operate in the far seas and begin to operationalize an emerging new maritime strategy that will incorporate “far seas defense” and extend PLAN combat capabilities further from China. This concept is consistent with PLAN stated goals and training requirements, but is not yet codified in China’s current maritime strategy.

This article presents highlights from “China Moves Out: Stepping Stones Toward a New Maritime Strategy,” a new National Defense University monograph that uses Chinese and Japanese press reporting to trace the evolution of Chinese navy deployments to the Western Pacific since 2004. These sources are sufficiently detailed to analyze how the PLAN normalized its operations in unfamiliar waters and to understand how this template can be applied to understand future PLAN efforts to incorporate “Far Seas Defense” into China’s existing maritime strategy. Analysis of China’s Western Pacific deployments contributes to broader discussions on China’s maritime strategy and can illuminate the PLAN’s strategic and operational ambitions.

The study suggests that the PLAN uses a building block approach to naval operations in unfamiliar waters. The Navy first methodically masters fundamental skill sets and then integrates new concepts or capabilities to conduct more complex operations. This maturation of PLAN operational capabilities has enabled the PLAN to expand its geographic and operational horizons.

The study also provides a strategic framework to illustrate how PLAN interests are increasingly linked to the far seas. This framework provides insights into ways the navy will be used to protect current Chinese interests and to defend against perceived threats in both the near and far seas. It concludes that integration of the concept of Far Seas Defense into its China’s maritime strategy is a near-term objective.

To assess PLAN operations, the report examines the evolution of PLAN near seas operations and exercises in the Western Pacific since 2004. The analysis breaks PLAN operations into two to three year increments for analytic purposes, tracing steps towards normalization of Western Pacific deployments. This approach yields useful insights into how lessons learned from near seas operations will be combined with far seas deployment proficiencies to modify China’s current maritime strategy.

Although the PLAN did not deploy outside the first island chain between 2004 and 2006, the PLAN enhanced training in disciplines that enabled it to take steps toward conducting operations further from the Chinese coast. Three factors influenced the development of PLAN capabilities and tactics to execute near seas active defense during this period. First, geopolitical events surrounding issues with Taiwan, Japan, and Hong Kong intensified PLAN requirements to become more familiar with waters that could be used during potential future contingencies.

Second, President Hu reemphasized President Jiang’s “informatization” concepts, which influenced the PLAN tactical approach. Third, President Hu’s 2004 announcement of new PLA historic missions required the PLAN to enhance its ability to operate at greater distances from the coast to protect Chinese national interests, including the safety of PRC citizens, maritime commerce, and overseas investments. These three factors required the PLAN to enhance its maritime skills as prerequisites for future operations in the Western Pacific and beyond.

From 2007-2009, the PLAN continued to train and exercise in areas supporting future contingency operations, particularly expanding operations into the Philippine Sea beyond the First Island Chain as part of the evolution of near sea active defense. These Western Pacific operations enhanced the PLAN’s ability to operate in unfamiliar waters and helped to develop the logistics and command and control systems necessary for operations further from the coast. The PLAN also diversified the types and classes of ships it deployed to the Western Pacific.

The PLAN commenced its first counter piracy deployment to the Gulf of Aden during this period. While counter piracy deployments contribute little to the navy’s ability to defend China against advanced naval forces, the lessons the PLAN learned from these deployments contributed to basic proficiencies the PLAN needed to master as a prerequisite to defending China’s interests in the far seas.

The PLAN increased the frequency, complexity, and its confidence in executing “Blue Water” operations in the Western Pacific during the three-year period from 2010 through the end of 2012. Not only did the PLAN further diversify the straits used to access the Western Pacific, it also mixed up the classes of ships that participated in blue water training.

During 2013-2014, the PLAN integrated land-based fixed wing aircraft into Philippine Sea exercises and executed the first Western Pacific exercise that involved all three fleets operating simultaneously. In addition to its Philippine Sea deployments, the PLAN also conducted its first surface ship deployment to the Indian Ocean outside of Gulf of Aden counter-piracy operations.

The Indian Ocean is not part of China’s “near seas” concept, which could suggest the deployment represents PLAN nascent efforts to apply lessons learned from its routinized operations in the near seas to develop a Far Seas defense capability. The PLAN also appears to have refined how it responds to geostrategic concerns about its maritime operations in the near and far seas during this period.

Normalization of PLAN operations in the Western Pacific, along with years of counter-piracy deployments to the Gulf of Aden, have given the PLAN the requisite experience, confidence, and proficiency to defend China through the operationalization of far seas defense capabilities.

Just as the PLAN incrementally expanded the complexity and scope of its operations in the Western Pacific over the last decade, the PLAN is likely to gradually increase the frequency of far seas combat readiness patrol deployments.

Such an approach would suggest that over the next five to seven years, we are likely to see an increase in mixed platform PLAN surface action groups deploying to the far seas and rehearsing a myriad of combat warfare disciplines, such as anti-submarine, anti-air, and anti-surface warfare exercises. These combat readiness patrols may include deployments along various strategic Sea Lanes of Communication (SLOCs) in the Pacific, chokepoints in the Indian Ocean, and perhaps even to the northern Pacific to support China’s Arctic commercial interests.

Patrolling along distant sea SLOCs or near strategic chokepoints achieves two objectives. It helps to protect Chinese economic interests that transit strategic straits and has a deterrent effect by periodically placing Chinese combatants along potential routes that could be used by the U.S. Navy to intervene in a conflict involving China.

The study’s strategic framework and examination of the PLAN’s evolutionary approach toward operating in unfamiliar waters are useful for understanding how China uses its Navy to protect its interests. The longer report also identifies several indicators that if observed, would suggest PLAN is incorporating far seas defense into its maritime strategy. Another contribution is the comprehensive cataloging and systematic analysis of all PLAN Western Pacific deployments since 2004 and a forecast of where the PLAN will operate in the future.

The study also confirms two methodological points. First, the analytical framework of time period analysis facilitates the systematic assessment of PLAN evolutionary developments, and is useful for contemporary analysis of PLAN capabilities. Second, Chinese and Japanese press reporting can be incredibly valuable for analyzing Chinese military transparency. These points should be useful for today’s China hands and maritime analysts tackling other security puzzles.