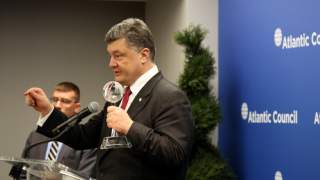 It has become somewhat of a cliché to say that Ukraine is Europe’s most corrupt country. While the the IMF agreed on February 12 to extend to Kyiv a new $17.5 billion rescue package over four years in exchange for continued structural reforms, the real question is if staving off the country from an imminent default at the hands of international creditors (read, Russia) would be enough. Why? Because one of the unanswered questions for Kyiv’s leaders is whether they have the mettle to deal with the country’s public enemy #2: corruption.

The correlation between state instability and high levels of corruption has long been established and is one of the major features behind state failure—and Ukraine’s weak state has so far been unable to stop kleptocratic elites from syphoning off public money. Nevertheless, in spite of many setbacks in Ukraine’s fight against graft, Kyiv has recently embarked on an ambitious program of lustration directed at members of the former regime.

In a nutshell, lustration refers to the purging of civil servants and government officials from all levels of public administration on account of their association with the previous regime. Stemming from the Latin term lustrare—purification by sacrifice—lustration is an extreme procedure that needs most of all to strike a balance between its aims and its effects. But will Ukraine's be fair? Or will it turn into yet another example of a noble principle employed by the state not to do justice, but to enact revenge? More importantly, could extensive lustration hamper Ukraine’s economic growth?

The law, which passed amid fierce Parliamentary fighting in September 2014, is one of the most far-reaching ever to emerge out of Eastern Europe. In its current form, it subjects a whopping one million people who worked under the ousted Yanukovych government, as well as members of the Communist nomenklatura and KGB agents, to screening processes for their involvement in the former regime. The law also applies to individuals who “carried out events aimed at sabotaging the foundations of Ukraine’s national security, defense or territorial integrity by their actions or lack thereof, made public calls for violations of the territorial integrity and sovereignty of Ukraine, or fanned ethnic feud.” Those found guilty will receive a five- to ten-year prohibition from holding public office.

Conveniently, the law does not apply to elected officials, such as former Yanukovych minister and current Ukrainian president Petro Poroshenko or Ukraine’s richest man, Rinat Akhmetov, a former MP. Ukraine’s Justice Minister has been a vocal critic of this loophole, claiming that subjecting all officials to lustration mechanisms is “an essential precondition for transformations in the country.” The rift deepened on February 10, when the prosecutor general Vitaliy Yarema resigned after opposing parts of the law.

The desire to “cleanse the government” of the remnants of the past seems to be an obvious choice for a Ukraine ridden with rampant corruption, nepotism and tax avoidance, but the government should tread carefully in the application of the law. Human Rights Watch has been quick to criticize the law, claiming that the review and dismissal of judges lacks adequate public consultation and could be subject to political bias and will essentially undermine the independence of the judiciary, “which can only deepen mistrust in an already fractured society.”

Perhaps the most stringent condition in the new law refers to “property lustration,” which effectively means that transgressors and their family members “have to prove the legality of the means they used to buy property.” This latter provision could be a dangerous double-edged sword. Some 80 percent of Ukraine’s GDP is in the hands of fifty individuals, some of whom are suspected to have acted in support of the separatists or worked with the former government before defecting to the current government. Could property lustration act as a catalyst, open up Ukraine’s economy and improve its overall business climate?

Were property lustration applied thoroughly, individuals such as Rinat Akhmetov, Vadim Novinsky, Yuriy Ivanyushchenko, Vasily Khmelnitsky, Dmytro Firtash, Serhiy Liovochkin, Andriy and Serhiy Klyuyev and Viktor Pshonka, who obtained assets or were the recipients of “fake privatizations” during the Yanukovych era, should be investigated.

Unfortunately, the early signs are not encouraging. As a report by the ECFR showed, after the Maidan, the oligarchs sought to adapt or even increase their clout over the government. Ihor Kolomoisky, co-founder of Ukraine’s biggest bank, has been targeting the interests of former Yanukovych crony Serhiy Kurchenko, while Vitaliy Khomutynnik, another member of the “Yanukovych Family,” is now comfortably installed in the Parliament as deputy of the “Economic Development” faction.

So far, there have been two waves of lustration that have charged 374 individuals; a third wave is set to begin in March. According to the Ukrainian Justice Ministry, almost half of the lustrated officials have already appealed against their dismissal from office, and, in November 2014, a Kharkiv court annulled the lustration against Volodymyr Sukhodubov, an ex-deputy prosecutor in the Kharkiv oblast. The belief among former officials, reinforced by a court decision, that one is being subject to an unjust form of political revenge could spell disaster for the country’s stability.

Indeed, Ukraine has previously been the subject of much contention with regards to the unfair targeting of certain officials in Yanukovych’s former government for misappropriation of funds, many of whom later found themselves on the EU and U.S. sanctions list, without being informed by authorities in Ukraine about their cases. One of the victims of this chaotic procedure and who was accused of corruption—Oleksandr Klymenko, Ukraine’s former Income and Tax Minister—recently won a case in Kiev’s Pechersky court in which the judge ruled that false information published about Klymenko and his alleged involvement in corrupt practices while in office should be retracted. Previously, in an interview with CNN, Klymenko defended his innocence concerning the allegations against him, claiming that, while his administration had certain shortcomings, including in the taxation of individuals, he felt his current situation was a “political purge” against him due to his involvement in the Yanukovych regime.

While the provision of initiatives to wipe out corruption within Ukraine’s bureaucratic ranks should certainly be encouraged both by the population and the IMF as a precursor to economic growth, careful measures must be taken to ensure these new policies do not amount to political purges and human-rights violations. Ukraine should also not rely fully on its lustration law to banish corruption from the country once and for all.

The government should tread carefully on such matters, since the law in its current form has the potential to further damage the finances and the unity of the country. While cleaning the economy of corruption and venal office-holders should be an imperative, eliminating individuals from Ukraine’s economic life could actually backfire if it were to hamper its chances for recovery. Lustration is simply a stopgap measure, not a one-size-fits-all approach and should be complemented by reforms aimed at fostering good governance and rule of law.

Wealthy elites should be brought in the public eye under strict taxation and oversight regimes. In this respect, the Ukrainian Finance Minister’s announcement of the creation of a “new electronic system for corporate tax filing to try to eliminate about $1 billion a year in tax fraud” in order to make Ukraine’s current bureaucratic tax system more transparent and less susceptible to bribes should be welcomed as a first step to boosting the economy.

To be clear, previous applications have not produced any “hard evidence that lustration laws contributed to democracy, that they improved governance, or that they curbed corruption.” As the Venice Commission argued, “Party affiliation, political and ideological reasons should not be used as grounds for lustration measures, as stigmatization and discrimination of political opponents do not represent acceptable means of political struggle in a state governed by the rule of law.” A new and just Ukraine should not be built on senseless sacrifice.