The Extraordinary Comeback of Ken Cuccinelli 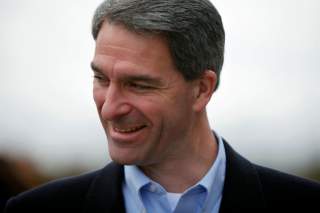 “This is disgusting,” Ken Cuccinelli told C-SPAN nearly three summers ago, in the heat of the 2016 Republican convention.

Cuccinelli, the former, controversial attorney general of Virginia and failed 2013 gubernatorial candidate, served as a chief lieutenant for Sen. Ted Cruz’s 2016 presidential bid—an effort that culminated in subterfuge at the 2016 convention. The Texas senator famously urged Republican voters to “vote your conscience,” in effect upgrading the Republican nominee, Donald Trump.

Adding insult to injury, Cruz’s subordinates, namely Cuccinelli, staged a quixotic bid to upstage Trump’s coronation—a Hail Mary, procedural attempt to deny him the nomination. When the effort fell short, Cuccinelli at one point threw down his lanyard and delegate credentials in protest at perceived RNC strong-arming. “If you won’t obey your own rules, there’s no reason to think you’ll obey any others,” Cuccinelli told MSNBC. “Here we’ve got RNC trampling their own grassroots delegates.”

“What Cuccinelli was trying to do was trying to throw the convention and try to get Cruz nominated,” recalls David Warrington, who served as counsel for the Trump Campaign on the Credentials, Platform, and Rules Committees at the Republican National Convention. Warrington has previously worked on Ron Paul’s 2012 bid, who staged a similar convention coup attempt, and was retained by Trump as something of a defensive measure. It worked.

That was then. On Tuesday, Cuccinelli was hired as a senior Trump administration official on immigration. For now, his role is bespoke—Cuccinelli will not take the floated “immigration czar” role nor will he be appointed Secretary of Homeland Secretary, which is still helmed by an interim official. But for Cuccinelli, it’s a remarkable political comeback, at the largesse of a president he once vociferously opposed.

In 2013, Cuccinelli lost what was generally viewed as an eminently winnable governor’s race after jumping the line and stiff-arming his principal Republican rival, the more moderate Bill Bolling, who was the lieutenant governor at the time. “Ken was an excellent student and he’s a good person,” political commentator and University of Virginia professor Larry J. Sabato told me. “But he’s also way to the Right, which explains why he lost the Virginia governorship in 2013.”

So far to the Right that he joined the chorus of conservatives who once argued that Donald Trump was not one of their own. It’s important to not lump Cuccinelli in with “NeverTrump.” Like the senator he once served, he eventually came around. “Well, I will support the Republican nominee. . . . I have nothing against Donald Trump and will support him if he wins,” Cuccinelli said at the convention. And so he did.

But for Cuccinelli to now helm President Trump’s signature issue of immigration, which the administration has treated as existential national-security matter, is still nothing short of extraordinary. Pete Snyder, who ran for Virginia lieutenant governor in 2013 in the same race as Cuccinelli and is a front-runner for the gubernatorial nomination in 2021, told me Cuccinelli’s retention is proof positive that President Trump, in his own way, respected the ingenuity of Cuccinelli’s convention machinations. Says Snyder: “I love it. . . . It’s a very clear signal that President Trump values brains and fearlessness more than loyalty. That’s it.”

Cuccinelli has been characterized in the media as an immigration hawk. But, generally speaking, he wasn’t the immigration hawks’ first pick for a big, new administration role—that was Kris W. Kobach, the former Kansas secretary of state and also a defeated gubernatorial nominee. Kobach’s compendious list of demands to the join the administration were embarrassingly leaked to the New York Times on Monday night.

On Tuesday, the choice fell to Cuccinelli.