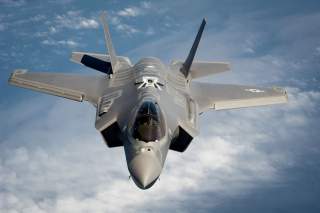 Upgraded future versions of the Lockheed Martin F-35 Joint Strike Fighter could replace the stealthy jet’s Pratt & Whitney F135 turbofan with a new adaptive cycle engine. The current F135 engine is at the limits of its capabilities and can’t push the jet out to the outer edges of its airframes capabilities—especially at low speeds.

Basically, the F-35 airframe gets too hot at lower flight levels because of the limitations of the F135—which has to run at high temperatures to generate maximum power. The F135 generates 28,000 lbs of thrust normally, but produces over 43,000 lbs of thrust with the afterburner engaged. “Today the F-35 has flight restrictions at low altitude because of thermal management,” an industry source told The National Interest.

Richard Aboulafia, an aviation analyst with the Virginia-based Teal Group, told The National Interest that it is obvious that the F-35 would need a bigger engine. “It's clear that the F-35 would need more power for faster speeds and greater payloads,” he said. “It's far from clear that the F135 can be grown the way the [Pratt & Whitney] F100 and [General Electric] F110 were on the F-15/F-16.  Therefore, a future F-35 variant with a new engine is a strong possibility.”

The U.S. Air Force is funding the development of next-generation engines under the Adaptive Engine Technology Development (AETD) and Adaptive Engine Transition Program (AETP). These new motors—which are called variable cycle or adaptive cycle engines—will be able to optimize their performance for various combinations of speeds and altitudes for maximum efficiency.

In other words, that means at high speeds, it will act like a turbojet with high jet velocity thrust for good supersonic performance while at lower speeds it would act more like an airliner’s engines. Both the Pratt & Whitney and General Electric designs accomplish that by adding a so-called “third stream,” which can be opened and closed depending on how fast or how high the aircraft is flying.

While the F-35 would be a retrofit, the real goal of the adaptive engine program is to power next-generation fighters and bomber. Both the Air Force and U.S. Navy have begun nascent efforts that would ultimately lead to new sixth-generation fighters.

The Air Force is focusing its F-X sixth-generation fighter efforts on replacing the Lockheed Martin F-22 Raptor and Boeing F-15C Eagle for the air superiority role.  Meanwhile, the Navy is looking for a replacement for the Boeing F/A-18E/F Super Hornet in the 2030s under a program dubbed F/A-XX.

There are fundamental differences between the two services’ approach to the sixth-generation fighter program. The Air Force is focused on an aircraft that would be focused on offensive operations inside the highest threat environments, according to senior Air Force officials. Broadband all-aspect stealth that is effective against low frequency radar would be paramount.

The Navy seems to be taking a different approach. Although the service officials say they don’t discount the importance of stealth, the F/A-XX might rely less on low observable and speed, and more on suppressing enemy air defenses. The Navy is also much more focused on using electronic attack and cyber capabilities to enhance the F/A-XX’s survivability.

Ultimately, it is looking likely that the Navy and Air Force will develop different airframes that share some technology like engines. “We are looking at this technology application to the NGAD [Next Generation Air Dominance] next-gen airplane,” McCormick said. “It won’t be the same engine. The engine we design for an F-35 is not the engine that wants to go into the next-gen airplane. We want to inform that engine design with this suite of technologies and look to a common core philosophy.”

What that means is that General Electric intends to keep the basic engine architecture the same across multiple variants that could fit onto different aircraft types. “We keep it as close to this core design as you can, but optimize it for the design of the aircraft,” McCormick said. “That means the engine may have to be scaled – 10 percent smaller or five percent bigger.”

Thus, one version could fit on the F/A-XX, while another could power the F-X, while another might be retrofitted onto the Air Force’s shadowy Long Range Strike Bomber. “The basic learnings of the architecture – for example, aerodynamic design, bearing structures – that could all translate to next-gen propulsion system for NGAD, for example,” McCormick said. “But it will be sized for that airplane.”

Dave Majumdar has been covering defense since 2004. He currently writes for the U.S. Naval Institute, Aviation Week and The Daily Beast, among others. Majumdar previously covered national security issues at Flight International, Defense News and C4ISR Journal. Majumdar studied Strategic Studies at the University of Calgary and is a student of naval history. Chris Kjelgaard is founder and editor of Airlines and Destinations.