Face Off: How America Can REALLY Stop China's Navy 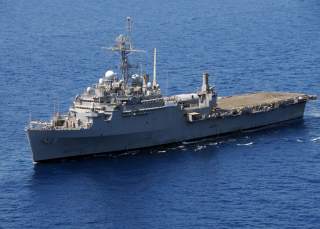 It’s dangerous to live by the unexamined assumption. Exhibit A: the oft-heard claim that U.S. sea and air forces sporting precision-guided arms will make short work of military facilities on South China Sea islets. “So what?” says one Pentagon official of Beijing’s island-building project. “If China wants to build vulnerable airstrips on these rocks, let them—they just constitute a bunch of easy targets that would be taken out within minutes of a real contingency.”

RAND, too, softpedals the islands’ longevity in combat. In a generally estimable report on the correlation of forces between America and China, RAND researchers maintain that South China Sea outposts could host only “a handful of SAMs and fighter aircraft.” It’s doubtful, they say, that People’s Liberation Army (PLA) forces forward-deployed to “reclaimed” reefs or atolls would comprise “a significant factor in high-intensity military operations beyond the first hours of a conflict.” Nothing to see here, move along.

The syllogism behind such wartime prognoses seems to go like this: Island fortresses can’t stand against assault unless they’re entirely self-sufficient. China’s manmade islands aren’t self-sufficient in terms of defenses or logistics. So why fret about them?

To start with, a fundamental point: assuming away a foe’s ingenuity, martial skill, and thirst for victory ranks among the most egregious sins a strategist or tactician can commit. As military sage Carl von Clausewitz counsels, the enemy isn’t some lifeless, inert mass on which we work our will. Instead war involves a “collision of two living forces,” both intent on getting their way. “So long as I have not overthrown my opponent,” he adds, “I am bound to fear that he may overthrow me.”

“Thus,” concludes Clausewitz, “I am not in control: he dictates to me as much as I dictate to him.” Or, in simpler terms, respect the adversary. No serious competitor is a potted plant.

On to operational specifics. At first blush it makes sense that U.S. forces could pummel airfields, piers, and shore infrastructure from the sea and sky. We’ve seen missiles lofted by aircraft, surface vessels, or submarines hitting targets on CNN for the past quarter-century. And there’s no gainsaying the fact that these are tiny sites. Sparse real estate will compel their occupants to group warplanes, ships, and infrastructure closely—packaging targets neatly for destruction.

Right? Well, yes, if PLA commanders leave their island bastions isolated and exposed, subjecting them to American attack. But why would they? China is not Saddam Hussein’s Iraq, nor the Taliban, nor al Qaeda. It is a near-peer competitor vis-à-vis the United States. The PLA bears a panoply of high-tech armaments, is amassing more with gusto, and will be fighting on home ground. Unlike the second-tier adversaries the U.S. armed forces have faced since the Cold War, PLA gunners can shoot back with real prospects of success.

PLA commanders are apt to envelop the islands with overlapping, interlocking fields of fire emanating from nearby islands, ships and aircraft, and metropolitan China. Sea-power historian Alfred Thayer Mahan illuminates the intricacies of seizing and defending islands. Yes, he makes position, strength, and resources the litmus tests for coastal or island bases. Strength means defensibility, resources the base’s capacity to replenish stores and armaments without undue enemy interference.

Taken in isolation, no manmade Southeast Asian island fares well by Mahanian standards. Each is weak, and unable to resupply itself. But Mahan also notes that whoever commands the seas adjoining an island will ultimately control the island. If forces friendly to its defenders dominate the sea—and the sky, in this air-power age—they can guard it, augmenting its defenses, while ferrying stores to its tenants to help them ride out enemy action.

An island’s innate strength and resources recede in importance under these circumstances. Islands and naval forces, then, are interdependent—a point Mahan hammers home while recounting the Anglo-French maritime war of 1778. He likens naval war in the Caribbean Sea to a “war of posts”—the islands over which Britain and France were wrangling being the posts. Navies were the arbiters of maritime command in the age of sail. Mahan reproaches the French Navy in particular for shunning a decisive engagement against its British enemy.

Instead French commanders focused on wresting islands from Great Britain. Making real estate the main goal was their mistake in Mahan’s eyes. Defeat the forces that control the commons, and the islands will wilt on the vine—letting the victor collect the spoils. Fail to go after the enemy fleet, and the islanders may hold out.

If China commands South China Sea waters and airspace—or can deny the U.S. Navy the use of the regional commons—it can turn Mahan’s island-defense logic to its advantage. This is a real prospect. Think about the DF-26 anti-ship ballistic missile (ASBM) paraded through Beijing last month. Lower-end estimates peg that bird’s range at 1,800 miles, upper-end estimates at 2,500 miles. Use the lesser figure for the sake of discussion. Pick up a compass, set it to 1,800 miles according to your map’s scale, and swing a circle around China’s Hainan Island.

You’ve just traced out the DF-26 range arc. You’ll notice that it spans the entire South China Sea—well beyond in many places. The contested Spratlys and Paracels nestle deep within. If the new missile, its fire control, and associated sensors pan out for PLA rocketeers on the technical side—always a fitting disclaimer when appraising new military technologies—then ships cruising within that arc are cruising within reach of shore-based PLA firepower.

Do the same using a 900-mile radius, and you’ve sketched the range arc for the older-generation DF-21D ASBM. The DF-21D envelope too encompasses much of the contested zone. That one-two punch makes for an intensely menacing tactical setting—even leaving aside the missile-armed tactical aircraft, patrol boats, and subs prowling sea and sky to drive up the costs of American access to Southeast Asia.

Mahan condemned “fortress fleets” like imperial Russia’s, which during the Russo-Japanese War (1904-1905) huddled within reach of protective gunfire from coastal fastnesses like Port Arthur. He deemed relying on land-based firepower a “radically erroneous” warmaking method. Shore gunnery generally outranged and outmatched shipboard gunnery, making it perilous for ships to fight forts. But even land-based guns had short range in those days—meaning they could sweep only small sea areas of hostile fleets. Skippers who sheltered within range of shore fire support, consequently, were timid and defensive-minded. Seldom were they venturesome—or victorious.

Hence Mahan’s ire. Multiply the range of the fort’s guns from under 10 to 900 or 1,800 miles, though, and you change his calculus entirely. One doubts he would object to a navy like China’s that could roam the China seas—and far beyond—while remaining the beneficiary of fire support from Fortress China. PLA Navy skippers can be awfully offensive-minded within that vast maneuver space. Long-range fire support, then, represents a difference-maker for the PLA Navy. It likewise promises to be a difference-maker for air or naval forces forward-deployed to the artificial islands. Insignificant in themselves, these static bastions could become useful outer sentinels once integrated into a defense-in-depth merging ships, planes, and missiles.

That puts a different gloss on matters, doesn’t it? It suggests that U.S. forces will pay a price—potentially a heavy one—for pelting South China Sea airstrips and support infrastructure from the sea. The U.S. platforms doing the pelting may have to venture into harm’s way to accomplish their goals. The penalty island defenders levy against U.S. forces could come in direct costs, measured in ships and aircraft lost in the attempt. Such are the hazards of confronting peer adversaries.

U.S. forces, moreover, will certainly pay a penalty manifest in opportunity costs. U.S. Navy ships and submarines disgorge missiles from vertical launchers that can’t be reloaded at sea. They will expend rounds against the islands that can’t be replaced short of returning to base to rearm. That takes time, a commodity in short supply in wartime, while exposing them to further attack as they exit and reenter the battle zone. All of this depletes U.S. forces’ battle potential: a task force with half-empty or empty magazines accomplishes less and less.

Circumstances thus may compel naval commanders to delay follow-on combat operations, curtail them because ammunition is short, or forego them entirely. Inflicting combat losses, disrupting enemy logistics, throwing a kink into an enemy campaign: pretty valuable contributions for a bunch of rocks, aren’t they?

Think about a land-warfare (and, as a bonus, pop-culture) analogy from a bygone Southeast Asian conflict: the Vietnam War. Fifty years ago next month, U.S. Army lieutenant colonel Hal Moore’s airmobile unit vaulted into the Central Highlands of South Vietnam by helicopter—and found itself alone and badly outnumbered and outgunned. It was stranded like, well, like an island in a hostile sea. To use the RAND team’s words, few observers would have thought a detachment from the 7th Cavalry would represent a significant factor in high-intensity military operations beyond the first hours of a conflict.

And yet Moore & Co. weren’t just relevant. They prevailed in the Battle of Ia Drang despite an overpowering numerical mismatch. On-call artillery from rear areas coupled with air strikes from U.S. Navy and Air Force warplanes overhead evened the balance against the North Vietnamese Army. Distant fire support empowered the American contingent to fight and win. Ripping a local tactical engagement out of its larger context, then, can mislead observers about the likelihood of victory or defeat. Flyspecks in the South China Sea may look helpless on the map—but they could prove far from helpless if the PLA can support them from afar.