Face Off: The Coming War between Armenia and Azerbaijan 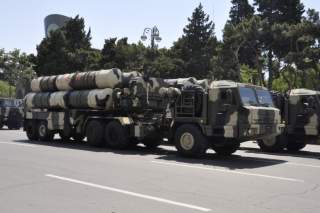 Another day, another deadly battle between Azerbaijan and Armenia in the southern Caucasus mountains. This time at least three people were killed. There is a lot of attention-grabbing, armed conflict in the world these days. Diplomacy is barely keeping the lid on a conventional war in Ukraine; from Nigeria to the Fertile Crescent war is about as common as peace. But to make accurate predictions about tomorrow’s conflicts, we need to look away from the preoccupations of the moment and turn our attention to the places that trouble is festering unnoticed.

To that end, let me introduce readers to my choice for 2015’s sleeper hotspot: Nagorno-Karabakh. This obscure enclave in the Southern Caucasus is heating up, and the possibility of military conflict between Armenia and Azerbaijan is increasing. Nagorno-Karabakh is a mountainous region of western Azerbaijan. In the early 1990s, ethnic tensions between Christian Armenians and Muslim Azeris in the area resulted in a war that in many ways resembled the simultaneous and better-known wars in former Yugoslavia.

Hundreds of thousands were displaced, but the Armenians were eventually victorious. Nagorno-Karabakh has been de-facto independent since the end of the war between the then-newly independent nations of Armenia and Azerbaijan. The mostly Armenian population of the disputed region now lives under the control of the Nagorno-Karabakh Republic, a micronation that is supported by Armenia and is effectively part of that country. Despite a Russian-brokered ceasefire, the war never officially ended, and Azerbaijan still vigorously disputes the status of Nagorno-Karabakh, to put it mildly.

(Recommended: The Ultimate Nightmare: Are the U.S. and China Destined for War?)

What is it that makes Nagorno-Karabakh particularly dangerous?

First, there is virtually no room for compromise between the two sides: Azerbaijan refuses to settle for anything less than full control of the entire area, while Armenia will not countenance anything more than a purely symbolic restoration of Azeri sovereignty. It is difficult to imagine Azerbaijan surrendering its claim to almost one-fifth of Azerbaijan’s official territory for any reason.

Azeri President Ilham Aliyev continues to assert Azerbaijan’s claim with increasing forcefulness. Armenia is also unlikely to relinquish any land, because Nagorno-Karabakh effectively increases the size of Armenian territory by one-third, which is very valuable for a small, thin and landlocked nation with little strategic depth and historic enemies on almost all sides. The Karabakh conflict is a zero-sum game.

Secondly, the dispute is only growing more militarized and dangerous. Both Armenia and Azerbaijan have professionalized and rearmed their forces significantly since the first war.  The Azerbaijani Army and the Armenian Nagorno-Karabakh Defense Army face each other along over a hundred kilometers of a fortified, land-mined and impassable border. Elaborate trenches, bunkers, revetments and artillery positions abound on both sides of the disputed line of demarcation and the forward positions of the two sides are often less than one hundred meters apart.

Since the ceasefire, hundreds have died in frequent raids and exchanges of fire across the lines that always contain the possibility for escalation. Raids and skirmishes are increasing in frequency and intensity. Since the summer of 2014, these limited but dangerous clashes have taken place almost daily, although they only attract international attention when someone is killed. Azeri forces shot down an Armenian Mi-24 helicopter in November and there was fighting on the ground as the Armenians attempted to recover bodies from no-mans land. Most recently, on January 31 of this year, the Nagorno-Karabakh Defense Army “launched a preemptive attack” on several Azeri positions and killed a number of Azeri soldiers.

Both countries have strong incentives for taking military action in the next few years. Azerbaijan’s leaders know the military power balance is shifting in their favor. Since the mid-2000s, Azerbaijan’s military has spent tens of billions of dollars on a large arms buildup. The Azeri Land Forces took delivery of $1 billion worth of armored vehicles and artillery from Russia in 2013 and 2014 alone, and that pace of acquisitions shows no signs of slowing, even with the current decline in oil prices.

Azerbaijan’s arms purchases are clearly designed to increase the ability of the Azeri Land Forces to wage a campaign to reclaim Karabakh. They are focused on acquiring modern mobile artillery and rocket systems that would be necessary to pound Armenian infantry out of rugged, fortified terrain and escape counter-battery fire from Armenian artillery. Azerbaijan recently acquired two batteries of fearsome Tos-1A Buratino thermobaric heavy rocket artillery systems from Russia. If deployed en masse, these systems would be ideal for opening a general offensive by blasting a gap in Armenia’s frontline trenches on the largely flat Agadam plain that forms the geographic center of the disputed border.

Israel has been one of Azerbaijan’s strongest defense partners for several years now, and as a result of this quiet relationship, the Azeri Air Force now fields an impressive array of Israeli drones. Azerbaijan’s Israeli drone fleet is invaluable for hunting Armenian artillery.

With no hydrocarbon resources, Armenia cannot afford to match this level of military spending, so the leaders of Armenia and the Karabakh pseudo-state may foresee a grim military balance in the future and choose to face a conflict on more favorable terms sooner rather than later. Though it has not met the Azeri buildup drone for drone and tank for tank, the Armenian military is also spending as if it predicts a war.

Most notably, Armenia and Russia have meticulously maintained an air of ambiguity about whether or not Armenia has actually obtained state-of-the-art 9K720 Iskander short-range conventional ballistic missiles from Russia. Iskanders could provide a way for Armenia, which has a very small air force, to hit the superior Azeri Air Force on the ground in Azerbaijan. Since 2012, Armenia has also invested heavily in Russian-supplied upgrades for its large numbers of existing armor and artillery and in domestically-produced drone systems. In general, the alliance with Russia is Armenia’s biggest strategic crutch.

Armenia may be at a slight disadvantage in equipment but more than makes up for that by holding strategic and very defensible terrain. Armenian forces already control all of Karabakh’s main roads, population centers and the sources of water and electricity. To reach them, Azeri forces would have to cross steep, rugged mountains that are heavily fortified by well-equipped local Armenian forces. To the north, the Armenian zone of Karabakh is accessible only via the treacherous Omar Pass over the Murovdag mountain range. Azeri forces entering Karabakh from the east would have to pass through a hole in the mountains that is only about 1.5 miles wide at the town of Askeran in order to reach Karabakh’s main city of Stepankert. Getting past these geographic barriers will not be easy. Karabakh’s water and electricity originate from the hydroelectric dam at the Sarsang Reservoir, and the main road to Armenia proper passes through the Lachin corridor, both of which are even farther and more inaccessible for any hypothetical Azeri operation in Karabakh.

The military balance and geographic factors thus dictate that Baku is in the driver’s seat with regard to changes in the status quo. Armenia already controls the territory it wants, and its military options are constrained to the defensive. Meanwhile, Azerbaijan’s president Ilham Aliyev is putting out a steady stream of aggressive rhetoric, insulting Armenia and promising that his country will recapture Nagorno-Karabakh. Even without a definite choice to start a war, both sides could escalate one of the frequent border skirmishes, either by choice or because the feel compelled. This could easily be the start of a general conflict, because both Armenia and Azerbaijan have incentives to go to war and they are already on a hair trigger. The frontline in Karabakh is only becoming more dangerous. Readers should watch it carefully.

Jack Mulcaire is a contributor to The National Interest and WarontheRocks.com. He holds a degree in international relations from Occidental College and is an analyst at Harvey & Company.