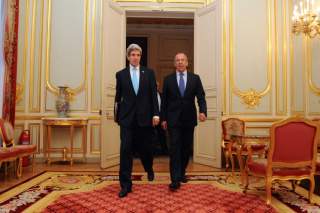 The attack letter on the Boistö bilateral U.S.-Russian Track II initiative setting out a path toward a stable cease-fire in Ukraine is sad, yet, in ways, useful. Sad, because it graphically displays how hard it will be to achieve consensus, even among outsiders who want to be helpful in easing Ukraine out of the current morass. But it is also useful, because it highlights what the real choices are among a series of unhappy alternatives. Participants on both sides are highly respected, experienced individuals and, thus, their clash of views merits more than passing attention.

Set aside the critics’ strange dismissal of the Boistö plan, because Ukrainians were not part of the meeting. Since when have any among the eighty-nine letter signers not participated in some initiative—singular, bilateral or broader—designed to develop ideas for solving a problem where the third party or parties concerned were absent? The Boistö participants, most from universities and think tanks, were simply trying to sketch a path that might be helpful, should the Ukrainian sides and their foreign allies wish to walk it. As the report says, a high-level U.S.-Russian dialogue is needed as “part of a larger discussion that must include Ukrainian as well as European representatives.”

The real issue is whether the path suggested is helpful. The signers say “no” for four reasons:

First, they contend, the initiative treats the two sides “as equals and fails to recognize Russia as the aggressor.” Russia’s role in the Donbas war surely amounts to aggression, but how helpful will making that the premise of an agreement requiring Russian cooperation be to achieving an agreement? To drive home their point, the authors of the letter condemn the initiative’s call for “withdrawal of regular Russian and Ukrainian army units to an agreed distance from conflict zones,” and insist that “Russia must remove all of its forces from Ukraine and stop attacking and invading its neighbor.” Here, however, it would be useful to distinguish between steps key to a cease-fire and what will ultimately be required to end the war in eastern Ukraine. What President Poroshenko and President Putin agreed to as part of the Minsk cease-fire is essentially what the Boistö initiative urges; what the initiative’s critics demand must, indeed, be the ultimate goal.

Second, the initiative’s critics say Russians and Americans have no business recommending a number of “humanitarian” and “cultural” measures that are for the Ukrainians to decide. But who among the letter’s signers seriously doubts that, for any cease-fire to stick, it will require “the return of and humanitarian assistance for refugees,” repair of the war’s damage, mutual guarantees for labor migrants, improved transport and energy-related infrastructure and the like? Indeed, the recommendation for “amnesty for combatants not involved in war crimes” is already a part of President Poroshenko’s fifteen-point peace plan and the Minsk cease-fire agreement.

One point in the Boistö plan should be weighed carefully. The plan calls for the “preservation of Russian-Ukrainian economic relations, including defense-industry cooperation.” The issue is controversial, but cuts to the heart of any durable accommodation between Russia and Ukraine. Tensions between Russia and Ukraine began over Moscow’s fears, whether well founded or not, that Ukraine’s Deep and Comprehensive Free Trade Area agreement with the EU would impair Russo-Ukrainian economic ties. The deal is now done. While signs are that all three parties—Ukraine, Russia and the EU—are willing to consider steps easing Russian concerns, finding formulas that protect legitimate, transparent Russian economic dealings, particularly with eastern Ukraine, will require some doing. Simply allowing Russia more time “to adjust” to the Association Agreement’s effect on Ukrainian trade, the EU’s likely offer, won’t suffice. Defense industrial cooperation is a separate matter, and given its importance to both economies, preserving it should be welcomed—not opposed—by the United States and its European allies.

The Boistö plan’s handling of the Crimean issue constitutes the critics’ third objection. Urging, as the plan does, a “discussion of the settlement of legal issues pertaining to the status of Crimea” is indeed a nonstarter. The annexation will not and should not be given legal standing. But if the letter’s signers mean to suggest that restoring Crimea to the status quo ante must be a precondition for any resolution of the Ukraine crisis, they are recommending that the crisis remain unresolved. Ukrainian leaders themselves recognize that the future of Crimea can only be resolved over the long run, and for now, the task is to find a productive way of dealing with a reality whose legitimacy is unaccepted. The United States and other nations do have a major stake in de-legitimizing this breach of international law, and in ensuring that it is not repeated by Russia or others. Doing that, however, requires focusing the larger international community, including Russia, on the norm’s reaffirmation in as many ways and forums as possible.

Fourth, the Boistö initiative’s critics strongly object to what they claim (rather inaccurately) is the initiative’s support for “permanent guarantees of Ukraine’s ‘non-bloc status.’” The Boistö plan, in fact, calls for “mutual respect for the non-bloc status of Ukraine as stipulated by Ukrainian legislation.”

And now, the heart of the matter. Staking one’s position on principle—on Ukraine’s right to pursue membership in NATO—is a cop out. One would have to be in a deep slumber or suffering a profound delusion to miss the central role Ukraine’s future relationship with NATO will play in how the Ukraine crisis turns out. Ukraine will not be at peace until the prospect of Ukraine in NATO fades from view. Russia, of course, can guarantee that doesn’t happen, if the cease-fire collapses and it escalates its role in a renewed war. But whatever the ongoing turbulence in Ukraine, if Russian troublemaking is to subside, some assurance—formal or not—that NATO will not soon reach the Russo-Ukrainian border seems essential. Since NATO clearly will not give Russia legal guarantees to that effect, preserving the proscription the Ukrainians have themselves legislated makes sense.

That leads to the large ugly reality that few in the United States or Europe have yet begun to face (and a reality, one assumes, that most of those who signed the Freedom House letter would bridle at). There will not anytime soon be a political settlement that banishes separatist forces in the Donbas, blocks Russia from meddling in Ukraine’s unsettled politics, draws the people of Luhansk and Donetsk back into a normal, national political process and allows Ukraine to go about addressing its multiple deep economic and political problems unhindered by profound national divisions. Bluntly put, Ukraine seems fated to produce Europe’s latest and by far most portentous and dangerous “protracted conflict.” Sadly, this may be the best outcome—and maddeningly so, because none of this need have happened had East and West not both been so shortsighted when they had the opportunity to create an alternative future. Best, when measured against the chaos and violence that is the likely alternative.

This may be the Putin leadership’s preferred outcome—shortsighted and ill considered as that is likely to turn out to be. But for the United States and its European allies, it will pose hard challenges that they have so far been unwilling to confront.

First, they will need to decide how they intend to deal with a country deeply enmeshed in a systemic political and economic crisis and, in all likelihood, further burdened by a malignant “frozen conflict” in two key eastern provinces. To this point, the initial steps taken by the Poroshenko government are encouraging, but scarcely proof that the paralysis of the past can be broken. And to this point, the measures undertaken by the United States, the EU and the IMF to assist are band-aids, and scarcely on the scale of what will be needed to rescue the country. Those whose only policy prescription is to impose further sanctions on Russia and provide more and better military aid to the Ukrainian military are living in a bubble.

Second, the United States and its European allies must sooner or later decide how far they are prepared to let the Russian-Western relationship deteriorate, how ready they are to risk a confrontation that gets out of hand and what range of larger, longer-term interests they are willing to sacrifice to current policy. At some point, if they are wise, they will need to decide how their efforts to surmount the crisis in Ukraine are to be integrated into a larger picture—into a vision of where they want the Russian-Western relationship to be five or ten years from now and what steps they should take to get back on that track.