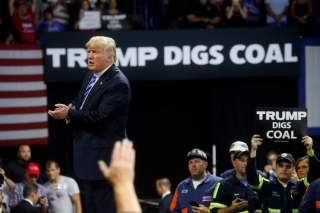 By most key economic indicators, the U.S. economy is remarkably healthy. Consumer confidence is high, unemployment is low, and it seems as if every week the stock market is setting a new record. Despite these successes, however, there is a growing disease that, if left unchecked, will slowly eat away at the economy’s robust health like a cancer. This disease is central planning and it is aggressively attacking the energy sector.

Both Republicans and Democrats have imposed energy subsidies, mandates and regulations that often appear tempting to “solve” a wide range of politically concocted problems. Whether it is energy security, scarcity, or an environmental concern, politicians continually find excuses to intervene in the market.

It’s not surprising that central planning in the energy industry has a lousy track record for the same reasons socialism failed—government lacks the information and motivation to substitute effectively for competitive private forces. Just think about the disastrous direct and unforeseen economic and environmental costs of one of the worst failures of planning in U.S. energy policy history: Soviet-style production quotas for ethanol.

Energy central planning grants government control over the means of production consistent with its arbitrary view of how the future ought to be planned. As recently noted by George Will, such industrial policy has become a form of compassionate socialism, where government tells consumers what to buy in a supposed effort to help them. And, despite wildly differing views on what “compassionate” means and much to the chagrin of innovators, consumers, and taxpayers, central planning bias has unfortunately gained steam in the last two administrations.

The Obama administration embarked on a green industrial pathway via subsidies and the expansion of energy planning under the Clean Power Plan. Now, to mitigate a nonexistent grid emergency, the industrial policy pendulum risks swinging more severely in the opposite direction, in the form of the Trump administration’s massive bailout proposal for certain unprofitable coal and nuclear plants. As Will notes, the president’s order that the energy secretary must protect “yesterday’s coal industry against the market menace” of cheap natural gas embodies compassionate socialism in practice.

Moreover, the rhetoric of the Energy Department welcomes such a narrative. For example, Energy Secretary Rick Perry recently quipped that because “government’s been picking winners and losers since government was created” the appropriate policy response is to “pick good.” This epitomizes the political gaming and corporate patronage culture that an administration promising to “drain the swamp” should vigorously reform. A responsible course of action is to unwind existing subsidies and overhaul the regulatory state, which the Trump administration has done more effectively in the environmental realm. Both the coal and nuclear industries are subject to excessive, ineffective regulations that artificially inflate the cost of these resources and stifle innovation.

Yet Secretary Perry describes economics as secondary to grid resilience. He views the grid through the poorly rationalized lens of defense policy. In contrast, experts have maintained that economic principles should guide policy decisions about grid resilience and focus on the provision of delivered service, rather than retaining specific fuel types. At the same time, conservative groups opposed to Obama’s green industrial policy are calling out the Trump administration’s alternative industrial policy as bailouts masquerading as national security investments.

The United States already boasts a robust set of institutions to evaluate grid reliability and resilience, and none have revealed any semblance of an emergency. As noted by Vice Admiral Dennis McGinn, pursuing energy nationalization to address an imagined grid emergency is a headline more apt for autocratic countries like Venezuela.

If electricity policy left a gaping national-security risk, it might justify a targeted intervention. For example, improving on-site generation at military bases would protect them far more effectively against any supply risks on the centralized civilian grid. However, grid operators have stressed that a massive industrial policy overhaul is completely unwarranted for supply security.

What’s more, bailing out unprofitable coal and nuclear plants is not so compassionate after all. It will cost tens of billions annually in direct subsidy costs and is an affront to the success of the competitive markets that liberated electric consumers from regulated monopolies and government ownership. Beyond the direct costs of the bailout, there are system-wide, long-term consequences that will result from shielding certain plants and energy sources from competition. Once these power plants are subject to the realities of the actual marketplace, they will fail. Another significant economic drawback of the bailout is that innovative companies would face an additional barrier to entry because the federal government is protecting their uneconomic competitors.

Even worse, such a government intervention sets a nightmare precedent for executive abuse by any administration for decades to come. Legitimizing industrial policy establishes a template for any president to dictate grid investments that run counter to economic conditions. Subsequent administrations will have differing views on what the future ought to be, resulting in an unstable investment climate. This may mortally wound investor confidence and put us back on the dark path to socializing investment risk.

Permitting the executive to pursue civilian fuel preferences under the guise of security policy may help certain coal plants today. But there’s no doubt this will harm conventional resources under an administration prioritizing climate security. Such authority could also easily result in turbocharged green industrial policy that would render the Clean Power Plan laughable by comparison. Handing over the keys to the energy market castle to mere executive decree is a deeply regrettable political legacy, even if it temporarily appeases small constituencies.

Moreover, regardless of how “compassionate” their fuel preferences appear, no administration should have this power. Curtailing unwarranted executive authority would insulate competitive markets from political agendas. If the Trump administration insists on pursuing its abusive power play, Congress should consider revising the underlying statutes—the Federal Power Act and Defense Production Act—to limit the scope of emergency powers granted to the executive.

Legislative options include shifting authority to declare grid emergencies to institutions with the technical expertise and independence to verify such claims. The Energy Department appears politically compromised, whereas the independent Federal Energy Regulatory Commission has demonstrated fact-based discretion on grid evaluations. Furthermore, the executive should not have the authority to order consumers to purchase power from its preferred fuel sources.

All told, two lessons have emerged for energy leaders. The cultural priority is to delegitimize the notion of industrial policy. As for governance, the executive has become too powerful. Congress should reassert itself with rhetoric and reforms that ensure energy policy respects the rule of law and leaves investment decisions to competitive forces.

Just as Congress expressed concern about the Trump administration mischaracterizing ordinary trade as a national security threat, Congress should flag the inaccurate portrayal of market-driven power plant retirements as a security issue. Respecting U.S. institutions—civilian and military—while enhancing the role of competition will chart a course to a safer, cleaner and more prosperous energy future.

Devin Hartman is the Electricity Policy Manager and Senior Fellow at the R Street Institute.

Nicolas Loris, an economist, is the Herbert and Joyce Morgan fellow at the Heritage Foundation’s Roe Institute for Economic Policy Studies.