The Fall of France Revisited: Why America Supported the Vichy Regime 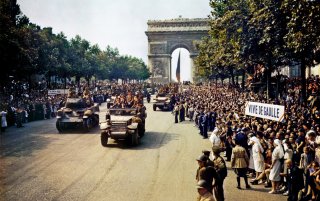 “You can always count on the Americans to do the right thing,” Winston Churchill famously observed, “after they have tried everything else.” As the historian Michael Neiberg makes clear in his new book, When France Fell: The Vichy Crisis and the Fate of the Anglo-American Alliance, nowhere was Churchill’s aphorism truer than in U.S. policy towards Vichy France.

A professor at the U.S. Army War College, Neiberg has authored an important and fascinating book that examines U.S. policy towards Vichy—a policy which not only put the United States at odds with its wartime ally, Great Britain, but also was destined to fail.

The fall of France in June 1940 was an earthquake. In six weeks, the French Army, previously considered the predominant military power in Western Europe, fell to the Nazi onslaught. In today’s World War II historiography, Pearl Harbor looms large as the event that catapulted the United States into its second world war in a generation. But as Neiberg documents, it was the collapse of France that changed American attitudes—formerly isolationist—towards another great power conflict.

The French Army loomed large in the imaginations of British and American policymakers alike. Churchill and Franklin D. Roosevelt were both admirers of French military prowess—and not only because of the exploits of Napoleon’s Grande Armée. French bravery in the Great War was legendary. The “Miracle at the Marne” and Verdun were more than just battles; they became quintessential demonstrations of valor. But the tremendous sacrifices of the French Army in the First World War forever changed France.

The France of the interwar years was one of disarray. There were forty-two governments between the two world wars. France, its great wartime leader Georges Clemenceau lamented, had “rejected greatness and returned to confusion.”

“The fall of France,” Neiberg writes, “had deep and lasting impacts on American society and the way the United States government understood what it had to do to ensure its own security.” He elaborates: “all American and British defense planning had begun from the assumption that the powerful French army, protected by the imposing Maginot Line, would tie the Germans down as the French had done on the western front from 1914 to 1917, giving a new Allied coalition time to organize, mobilize, and join the fight.”

But in a span of six weeks, it all evaporated. U.S. secretary of war Henry L. Stimson called the collapse of the French Army “the most shocking single event of the war.” American diplomat Robert Murphy, who would loom large in the events that followed, observed that “never before or since,” had one event “so stunned the entire world.”

But as Neiberg observes, “with the sudden fall of France in May and June 1940, the entire architecture of American grand strategy collapses. Most American strategists saw for the first time just how much of American security they had in effect outsourced to a foreign country.”

It was with the collapse of France, as the famous 1969 documentary The Sorrow and the Pity noted, that “the drama of collaboration and resistance began.” But in this drama, the United States would alternatively co-star with, and even direct, Nazi collaborators.

William Langer, a Harvard historian hired by the Roosevelt State Department to write an apologetic history of its policies toward France, would term the accommodation of Vichy a “gamble.” But in working with Vichy France, the United States didn’t just play a bad hand poorly, it chose a bad hand from the beginning, refusing at key points to reach for, or even consider, other alternatives. As Neiberg observes, “the United States, led by [Robert] Murphy and Secretary of State Cordell Hull, held stubbornly to the policy of recognition and aid even as the failures of that policy became painfully obvious.”

While numerous books have been written on the fall of France, U.S. policy toward Vichy has been curiously overlooked in recent years. Neiberg remedies this. The historian challenges accounts like Langer’s that explain away the Roosevelt administration’s decision to recognize, and attempt to work with, Vichy apparatchiks. And he does so in a highly readable fashion, authoring a book that is filled with interesting, larger-than-life characters.

FDR’s decision to work with Vichy frustrated the British, who backed Charles De Gaulle, a recently promoted under secretary of state who fled to England and declared himself the leader of Free French forces.

Notoriously strong-willed and inflexible, De Gaulle often annoyed the British officials who supported him. The Americans, however, were inextricably opposed to supporting De Gaulle, choosing instead to place their faith in Vichy rulers.

Roosevelt and the State Department, particularly Secretary of State Hull and diplomat Robert Murphy, favored supporting Vichy, believing that they could somehow exert influence with the Nazi collaborators. The United States was in a precarious position after the fall of France and hoped that maintaining good relations with leading Vichy officials could shape their decisionmaking.

But as Neiberg and other historians, notably Robert Paxton, have documented, Vichy was never as independent-minded as the United States hoped. Indeed, the fascist character of the regime became increasingly undeniable—to all, that is, except Roosevelt and Hull, who continued to delude themselves that Vichy could be a partner instead of the rogues’ gallery collection of Nazi stooges that it clearly was.

U.S. policy towards France was “worse than a crime, it was a mistake,” to paraphrase the eighteenth-century French diplomat and wit Talleyrand. Neiberg’s well-written account highlights the folly, while also offering lessons for today. Had the Roosevelt administration shown greater flexibility and less stubbornness, it could have discarded a policy that was as unpopular as it was unwise, and as immoral as it was short-sighted.