The Fall of Mosul Foreshadowed the U.S. Outcome in Afghanistan 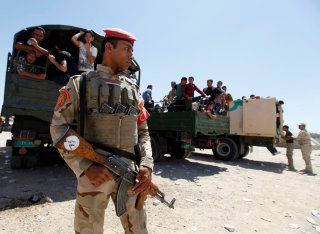 Many have scratched their heads asking why the oft-praised Afghan National Army, which the U.S.-led coalition trained and spent billions of dollars on, swiftly capitulated to the Taliban, abandoning their American-supplied sophisticated weaponry that should have been enough for a military victory. While discussions have focused on technical aspects of the capitulation like the inaptitude of the Afghan Army, the real reason for defeat goes considerably deeper.

The biggest mistake the United States made in Afghanistan was implementing the nation-building/democratization process with the mindset that it would unfold as it did with their Western counterparts. Expecting a country that has virtually no history of concepts like competitive elections to adopt democracy overnight was and is a mission impossible. The tribal, religious, cultural, and linguistic differences between the Afghan peoples are so great, and their allegiances are first and foremost to tribal or ethnic heads, not to the artificial government in Kabul. Coercing Afghans into coexistence under such a government would never work.

Demographically speaking, Afghanistan is made up of Pashto-speaking Pashtuns (42 percent), who have a strong tribal identity with more than 350 tribes and clans; Persian-speaking Tajiks (27 percent); Turkic ethnic Uzbeks (10 percent); and many other minorities, who all have had their own sovereign governance for a majority of their history.

The impossibility of implementing democracy in an ethnically, linguistically, and culturally divided Afghanistan is strikingly apparent in the country’s long history of civil wars in which groups have consistently prevented each other from seizing control. After the Soviets were defeated, this impossibility was particularly apparent.

In April 1992, Gulbuddin Hekmatyar, a member of the Pashtun Kharoti tribe who received the largest Central Intelligence Agency (CIA) funding during the Soviet invasion and was also backed by Pakistan’s Inter-Services Intelligence (ISI), was poised to take Kabul. This situation triggered the formation of the anti-Hekmatyar bloc in which Ahmad Shah Massoud, an ethnic Tajik who inflicted tremendous losses on Russians, and Rashid Dostum, an ethnic Uzbek who established a personal autonomous rule in northern Afghanistan called Dostumistan, joined forces. The Pashtun Hekmatyar’s failure to thwart the Massoud-Dostum forces prompted the ISI to create a more effective and predominantly Pashtun pro-Pakistan entity—the Taliban. In 1996, the Taliban seized Kabul and took control of two-thirds of the country until it was toppled by the 2001 U.S.-led invasion.

The United States’ success on the battlefield was quickly overshadowed by its failure to read the political, social, and demographic realities of Afghanistan. This failure was most visible in the 2009 presidential election, which was riddled with fraud and corruption. Hamid Karzai, the leader of the Popalzai-Durrani Pashtun tribe of Kandahar, and Abdullah Abdullah, who has close ties with the Uzbek and Tajik peoples in the north, faced off in the race. With only half of the country registered to vote and millions of votes cast, it was “suspicious” that Karzai inched above the required 50 percent threshold. Parliament subsequently rejected Karzai’s cabinet due to nepotism, bribery, and the influence of the warlords. Fawzia Koofi, a member of parliament from the Badakhshan region on the Tajik border, blamed Karzai for his cabinet picks saying, “I think, unfortunately, that the [selection] criteria were either ethnicity or bribery or money”.

The same pattern repeated in the 2014 and 2019 elections; the turnout for the latter was less than 20 percent. Both times Abdullah’s rival was Ashraf Ghani, who recently fled Afghanistan after the Taliban takeover. Abdullah rejected both election results on claims of fraud, and in 2019 he created a parallel government in the Uzbek-Tajik-dominated north and declared himself president, which the United States rejected. By 2019, U.S. nation-building efforts had already shown signs of failure as Afghanistan split between the Tajik-Uzbek north and the predominantly Pashtun south.

The impassable ethnic divisions, tribalism, rampant corruption, and warlord-ism have collectively prevented the development of a national consciousness among the disparate Afghan peoples, which in turn made the Afghan “National” Forces, wherein each soldier would be willing to fight for their country, a futile experiment. The post-2001 nation-building efforts in Afghanistan were continually on life support provided by the U.S. military presence and billions of American-taxpayer dollars. Salaries, not love of country, motivated most members of the Afghan Armed Forces. Corruption became so rampant in the Afghan military that half of its forces are believed to have been “ghost soldiers,” nonexistent personnel whom corrupt officials artificially created to draw salaries.

Afghan lawmaker Ghulam Hussain Nasiri, who has been researching the “ghost soldier” problem since 2015, said, “When we say we have 100 soldiers on the battlefield, in reality, it is just thirty or forty. And this creates the potential for huge catastrophes when the enemy [Taliban] attacks.”

“No one knows the exact numbers of the Afghan National Defense Forces,” an Afghan official told CBS News on condition of anonymity. He said the best internal estimates put the actual number at around 120,000, less than one-third of the number needed to secure the country.

Evidently, President Joe Biden’s claim in July that Afghanistan had “trained and equipped nearly 300,000 current serving members of the military” was far from accurate. That number was mutually agreed upon by a succession of American and Afghan administrations because they believed that the country required that number of forces; therefore, the United States funded salaries, training, and other expenses for that number. In the end, despite the billions of dollars poured into Afghanistan and thousands of man-hours spent, no national consciousness bloomed, and the Afghan military simply handed the country to their Pashtun Taliban brethren. The U.S. decision to pull out of Afghanistan and negotiate with the Taliban only expedited the capitulation.

What happened in Kabul last week should not surprise anyone as similar stories have already unfolded in the Middle East, most notably in Iraq. Similar to Afghanistan, Iraq was artificially created by the British after World War I by fusing three distinct sectarian and ethnic groups: the Shia Arabs (60 percent), Sunni Arabs (20 percent), and Kurds (17 percent), who all enjoyed autonomy under Ottoman rule and lived in relative peace. The new British construct required iron-fisted rule as no group would voluntarily give up its sovereignty to the central government in Baghdad, which was Sunni.

Baghdad’s relations with Kurds and Shias were particularly strained after Saddam Hussein, a secular Sunni, and his Ba’ath Party came to power in the late 1970s. With the mindset of “my enemy’s enemy is my friend,” the CIA responded to Hussein’s growing intimacy with the Soviets by covertly funding the rebellious Kurds in the north, just as it did with the Afghan Mujahideen in the 1980s. The American-funded instigation led to Hussein’s heavy-handed retaliation, which cost the lives of thousands of Kurds. Hussein also suppressed the majority Shia Arabs by excluding them from most public services.

Like in Afghanistan, Iraq’s nationhood never materialized. The Kurds remained loyal to their tribes, the Shias remained loyal to their imams, and the Secular Sunnis ruled them both. In fact, Hussein swiftly lost the Gulf War of 1991 against the coalition forces partially because he also had to fight his own Kurdish and Shia populations, who staged a widespread rebellion.

Iraq was a country barely held together by stitches that were torn open when Hussein was toppled in 2003. The tide turned in favor of the Shia Arabs and Kurds. With Hussein gone, the Kurds in the north declared their full autonomy. The majority Shia Arabs under the leadership of Nouri al-Maliki began attempting to eradicate Hussein’s people in what is called the De-Ba’athification process. The Shia’s purging of Hussein’s former generals and Ba’ath Party affiliates led to the Sunni insurgency, which eventually gave rise to the Islamic State. Equipped with knowledge and experience, Hussein’s former generals began to steamroll over central Iraq and large swathes of Syria, which has been embroiled in a bloody civil war since 2011.

It was in this context that the Islamic State, with its mere six thousand to seven thousand militants, captured Mosul, the second-largest city in Iraq after Baghdad, without resistance as the thirty-thousand-strong Iraqi Army—now predominantly Shia—abandoned its weapons and ran. Mosul, Iraq’s largest Sunni population-hub, is well outside of Iraq’s Shia heartland. The Sunni makeup of the city disincentivized the predominantly Shia army to mount resistance. The military members would rather have defended the Shia populations of southern Iraq and Baghdad than the Sunni-majority city of Mosul, which didn’t mean much to them. It was not until 2017, when the U.S.-led coalition (Combined Joint Task Force) provided substantial air cover for more than one hundred thousand Iraqi and Kurdish soldiers, that Mosul was recaptured from the Islamic State.