The Fallacy of Joe Biden’s ‘Bank of Multilateral Goodwill’ 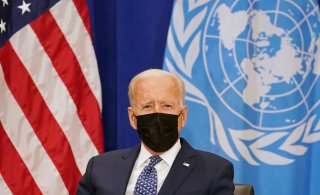 In a ballyhooed speech at the United Nations last month, President Joe Biden called for “endless diplomacy” through multilateral institutions to address common problems. But what does this mean? Must it exclude the application of American pressure through these institutions toward distinctly American ends? The Trump administration’s more thoughtful foreign policy critics admitted that the forty-fifth U.S. president built up unexpected leverage on a range of international targets. The question was always what to do with that leverage. In some important cases, the Biden administration has now answered that question: do nothing, reference liberal values, and dismantle said leverage without receiving anything in return.

Take the United Nations Human Rights Council (UNHRC). Here we have a case of a multilateral organization supposedly dedicated to the promotion of basic rights worldwide. And yet numerous anti-American dictatorships with appalling human rights records sit on this council, sitting in judgment of the world’s leading democracies while receiving little criticism themselves. The council is dysfunctional and unbalanced. Israel, in particular, receives a wildly disproportionate share of UNHRC criticism, completely unrelated to any sense of fairness or reality. The Trump administration, therefore, withdrew the United States from the UNHRC. Biden’s secretary of state, Antony Blinken, correctly says that the UNHRC is problematic and needs reforming. But the administration for which he works seems to have no plan to ask for such reforms. Instead, Biden announced soon after his inauguration that the United States would rejoin the UNHRC as an observer. Unilaterally, you might say—and without asking for any constructive changes on that council in return. Not only is U.S. support restored, free of charge. The Biden administration, in its wisdom, now asks foreign dictatorships to comment on structural racism inside the United States, using the UN as a helpful platform.

An even more egregious example of unrequited concession, arguably, is that of Biden’s approach toward the World Health Organization (WHO). In the immediate aftermath of the Covid-19 outbreak, the Chinese government lied, obfuscated, and attempted to cover up evidence of its own culpability for the worldwide spread of this deadly pandemic. WHO director-general Tedros Adhanom, acting more like a career politician than a doctor, went along with Beijing, praising China for its response. Trump made clear his unhappiness with the WHO and announced an intent to withdraw from that organization. The moment was ripe to insist on serious reforms in a flawed multilateral institution that had demonstrably failed to deal with a worldwide pandemic. Again, thoughtful Democrats, not to mention Republicans, suggested such reforms. And yet Biden’s response, within hours of his January inauguration, was to indicate that the United States would return to unquestioning membership within the WHO in exchange for… nothing.

This pattern of dismantling American leverage, and instead emphasizing gestures of accommodation through multilateral arrangements, appears to be one basic theme in Biden’s foreign policy. The president announced that the United States would rejoin the Paris climate agreement, without asking for any needed reforms or concessions in that agreement. His administration seems bent on dismantling American pressure against Iran, in order to reconstitute the deeply flawed nuclear agreement from 2015. And to be sure, it will be multilateral. In the case of China, to its credit, Biden officials so far maintain numerous components of a U.S. pressure campaign inherited from the previous administration. But even here, there is good reason for concern that the president’s greatest hope is to reassure Beijing rather than push back against it. His recent speech at the United Nations made no mention of Chinese aggression on multiple fronts. It appears that endless diplomacy has come to mean endless calls for multilateral solutions, disconnected from realities on the ground.

What explains this administration’s seeming fixation with accommodating gestures via multilateral institutions? A cynic might suggest that the president knows they are popular with liberals and progressives—the beating heart of his political coalition—and cost him little in domestic terms. So, he offers these gestures to his supporters, like flowers on a date. But this still begs the question: why do liberals place such tremendous emphasis on multilateral concessions in American foreign policy? After all, the pattern predates Biden.

It would be wrong to suggest that the liberal belief in the power of multilateral institutions is insincere. On the contrary, liberal internationalists believe in it with all the fervor of a religious fundamentalist. Liberals are trained, from college, to believe that common global problems—and here, they have a very long list—can only be solved through common global institutions. They believe that there exists a kind of overarching, unseen “Bank of Multilateral Goodwill,” and that if you make deposits into this bank, for example by saying the right (i.e., progressive) thing—or even better, by making substantial concessions internationally through multilateral mechanisms—you will eventually receive your money back and then some. A virtuous cycle of upward progress will take hold, nudging even the most hardened autocrats toward a grudging acceptance of modern progressive norms. The fact that this belief is simply taken for granted among respectable postgraduate aspirants to high office in U.S. foreign policy is precisely the point. It is more a religion than something empirically falsifiable. When it fails, liberals typically conclude that the only reason for its failure was that multilateral solutions were never pursued energetically enough.

There is only one practical problem with this invisible Bank of Multilateral Goodwill: it does not exist.

When the United States makes preemptive concessions toward anti-American dictatorships overseas, those concessions are not reciprocated. Instead, they are pocketed for gain, and said regime then moves on to the next aggression. The fact that preemptive concessions are made multilaterally, in the preferred liberal fashion, does not alter this dynamic. You can be sure that inviting tin-pot dictatorships to comment in a multilateral forum on supposed American structural racism will neither improve U.S. race relations, nor induce thoughtful reflection among the world’s leading autocrats hostile to the United States. Rather, they will use Western self-flagellation as a weapon, seeing in it one more pressure point to advance their own interest. In fact, they are already doing so. This is what liberal naivete has invited. Similarly, you can be guaranteed that the World Health Organization will not truly reform itself and demand Chinese accountability over the Covid-19 pandemic in the absence of serious American pressure. Rather, we will continue to get perfunctory studies and investigations; Chinese stonewalling; and a deliberately weak response from Tedros, who after all was and remains Beijing’s preferred candidate for director-general of the WHO.

None of this is to say that the United States should walk away from every last multilateral organization or agreement. In fact, doing so would simply create a vacuum for China to fill. There is a strong argument for a hard-nosed set of U.S. pressure campaigns against Beijing on numerous fronts, including through multilateral institutions, working together with U.S. allies. But that’s not exactly what Biden is doing. Rather, the president seems too often bent on genuflecting before left-liberal foreign policy platitudes, and this has real-world consequences, watering down American leverage.

In those cases where the Biden administration offers up genuine U.S. diplomatic and financial sacrifices toward and through multilateral organizations, without demanding anything in return, this does not make the world a safer place. It does not promote human rights. It does not further American interests. It does the opposite. It undermines simultaneous efforts to constrain foreign dictatorships—above all, the People’s Republic of China—from aggressively bad behavior all over the world. The fact that these sacrifices are made on the altar of multilateralism, in a kind of fervent liberal rain dance, is really no excuse.

Contrary to progressive opinion, affixing the term “multilateral” or “global” to a given organization does not render it sacrosanct. Some of these institutions and agencies contain pitiful dysfunctionality, corruption, and incompetence. The United States should approach multilateral treaties, institutions, and agreements on the basis of whether they serve American interests along with American values. One would think this is commonsensical for American foreign policy. When a given organization or agreement promotes those interests and those values, well and good. Institutions that fail this test should be reformed and corrected using a combination of carrots and sticks, incentives and disincentives, in a manner that is well-coordinated as opposed to erratic. And in cases of multilateral institutions that are truly irredeemable, the United States should walk away.

Judging from Biden’s first year as president, pious deposits into the invisible Bank of Multilateral Goodwill haven’t worked. The administration is great at providing carrots to global organizations. It hands them out unconditionally. No sticks are in evidence on these matters. Yet the president knows very well that the threat of withholding U.S. financial support can force needed reforms at the United Nations, since he worked alongside Senator Jesse Helms (R-NC) to do so over twenty years ago. Conservatives in 2021 have offered practical suggestions—here, for example—on how to improve a number of multilateral organizations including the WHO and the UN. Republican members of Congress should take up these recommendations, as some have, and so should the president. If Biden wants to play good cop, while congressional Republicans play bad cop on these issues, fine. But somebody is going to have to play bad cop, because these institutions are not about to reform themselves.